Both the Geelong Cats and Brisbane Lions will fight to avoid the embarrassment of a straight-sets elimination from September when they face the West Coast Eagles and GWS Giants in their respective semi-finals this weekend.

The Cats and Lions became the first top two teams in nearly a century to lose their first finals match last weekend, and they must now face teams who shape as the more likely to reach Week 3.

Both the Eagles and Giants conceded the first goal in their respective elimination finals against Essendon and the Western Bulldogs, but otherwise produced strong performances to win by 55 and 58 points.

At stake for the winners of this weekend’s semi-finals are a shot at Richmond (for the winner of the Cats vs Eagles) and Collingwood (for the victor of the Lions vs Giants) in the preliminary finals next week.

The Tigers advanced straight to Week 3 for the third consecutive year after downing the Lions by 47 points at the Gabba, while the Pies cashed in on a pro-Collingwood crowd at the MCG last Friday night to progress to the preliminary final for the second straight year.

It means that for the first time since 2011, both preliminary finals will be played at the MCG.

So who will it be that the Tigers and Pies face next week? Here is your guide to the weekend’s two semi-finals.

With just three finals victories in ten matches since the 2011 flag, the Geelong Cats will face death right in the eye when they welcome the reigning premiers, the West Coast Eagles, to the MCG to kick off semi-final weekend.

Chris Scott’s men were again made to pay the price for a dismal first quarter, trailing Collingwood from the get-go to crash to a ten-point defeat, putting their premiership aspirations on life support.

It marked the sixth time in their past eight finals campaigns that they have lost a first week final, a patch which also included elimination final losses to Fremantle and Melbourne in 2012 and 2018 respectively.

It leaves them at risk of becoming the first minor premier since North Melbourne in 1983 to crash out of a finals series in straight sets, and the first since the current AFL finals system was introduced in 2000 to do so.

Now they will face the daunting task of beating the Eagles, who showed Essendon and John Worsfold no mercy as they dominated their Victorian rivals to win by 55 points at Optus Stadium last Thursday night.

Instrumental to the win, which extended the Bombers’ finals drought to 15 years, were four goals to Josh Kennedy and a superb performance in the engine room from last year’s Norm Smith Medallist, Luke Shuey.

While it keeps the Eagles’ premiership defence alive, it does however mean they will have to travel to Melbourne in consecutive weeks just to reach their eighth grand final, and third this decade.

At least Adam Simpson’s men won’t have to travel to Kardinia Park, where they copped a 58-point humiliation in Round 6, in which they posted their lowest score for the year.

They were also beaten by the Cats quite easily in their most recent finals match, going down by 48 points in the 2011 preliminary final, this coming 12 months after the club had taken out the wooden spoon.

Despite the Eagles’ impressive form all year, I think the Cats will bounce back.

For the winner: A date with Richmond in the preliminary final at the MCG next Friday night.

For the loser: Season over, and a long summer to ponder what could’ve been.

The second semi-final brings up what shapes as a massive grudge match when the Brisbane Lions and GWS Giants square off at the Gabba on Saturday evening.

Why, you ask? Because it will be the first time Coleman Medallist Jeremy Cameron steps foot into the ground since he floored Harris Andrews with an errant elbow in Round 14 last year.

With that in mind, Lions fans will not be forgiving towards the 25-year-old, who copped a five-match suspension for a strike that was deemed to be intentional rather than reckless.

They’ll also be baying for the blood of Toby Greene after he escaped suspension from the judiciary for “serious misconduct” involving Marcus Bontempelli in the Giants’ 58-point thrashing of the Western Bulldogs last Saturday afternoon.

Greene instead copped a $7500 fine for his actions, freeing him to travel to Brisbane with the side, which completed a 119-point turnaround from their previous meeting against the Bulldogs, which they lost by 61 points.

They’ll also be hoping for a similar turnaround this Saturday night after losing to the Lions at home in Round 16. In that match, a fast start by Chris Fagan’s men saw them lead from start to finish to win by 20 points and notch their first win in the Harbour City since 2009.

The Lions will have had a week to lick their wounds following their 47-point loss to Richmond in their qualifying final, which marked the first time they’d ever lost a final at the Gabba since the merger came into effect in 1997.

They did well to lead by 12 points in the first quarter, but the lack of finals experience against the skilled Tigers – who have played in all but one finals series since 2012 – proved to be the difference.

Now, they’ll be banking on the experience of Luke Hodge, Charlie Cameron and Lachie Neale, who played in seven grand finals between them at different clubs, as well as Daniel Rich, their only survivor from their most previous finals campaign, to avoid crashing out of September in straight sets.

Mitch Robinson, who also played in a few finals for Carlton, will miss after suffering a hamstring injury last week.

For the winner: A showdown against Collingwood in the preliminary final at the MCG next Saturday afternoon. The stakes will be higher for the Lions, as this would be their first meeting against them in a finals match since the 2003 grand final. 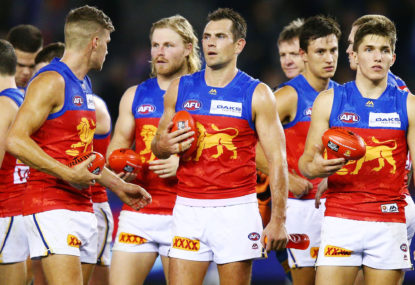