Why being despicable legitimised GWS as a football club

Let’s face it, GWS were on a hiding to nothing.

If they kicked on and won the five premierships in a row that they were tipped to, it would have been regarded like a bunch of private school boys pulling off what the world had given them anyway – coiffed haircuts winning the premiership in a friction-less, skilled but boring way.

If they lost – as they ultimately did in 2017 and 2018 – then they were flaky underachievers. If they had no fans based in a non-footy zone, then it was a joke to be laughed at.

A decade ago, the prospect of the corporate Gold Coast Suns and Greater Western Sydney Giants being admitted into the league seemed to augur a decade of artificiality: two teams that no one cared about stealing draft picks and premierships from St Kilda, Richmond, Fremantle and the long-suffering cases.

The first time GWS were relevant was the smashing they gave three-peat Hawthorn in early 2016. That game featured newly-Gianted Steve Johnson spending the entire match scragging with Luke Hodge, both ignoring a match the Giants won by 75 points.

Approaching their first final against Sydney in 2016, it occurred to me that this game could set the tone for all GWS finals and therefore their identity in perpetuity. Would they do a Fremantle 2003 and fall away, and be irrelevant for another decade?

In the event, though, Johnson ironed out Swan Josh Kennedy, Jeremy Cameron scored three goals in three minutes, and suddenly the Giants were the future – and the present.

Of course, the trade-off was that Johnson on Kennedy cost them the 2016 flag. But at least they now had that identity.

An identity of you-know-whats that everyone hates? Sure. But this was basically the only way they could have forged some authenticity as a club – to become a real club, with bona fides.

They suffer from having no fans at away games, definitely, especially in Melbourne finals like the Richmond match in 2017, the most partisan AFL crowd of all time. It suggests that perhaps they will lose their soul again once the early 2010s draft picks retire.

Nonetheless, GWS have done well to create a club with something of a true feel in only eight seasons. They have leaked players, but not the best ones – Josh Kelly and Stephen Coniglio have re-signed new deals.

Their comparison is Gold Coast, naturally, who in nine seasons have formed no soul or even had a winning season. Forming an identity is not a question of simply winning games.

It is about stirring up emotions in opposing fans.

Toby Greene whacked Caleb Daniel in the head. Shane Mumford admitted to liking to tackle the opposition with closed fists because it was an under-the-radar chance to hit people. Greene fly-kicked Luke Dahlhaus in the face. Mumford came out of retirement. Lachie Whitfield swung a few fists. The Toby Greene rule caused the outlawing of the cherished specky. Greene did God knows what to Marcus Bontempelli. Greene continued to lace up his football boots in general, heinous acts all.

Sure, they were the classical bullies who could only beat up people weaker than them and who faded without trace when the heat was turned up come finals time – as Greene himself faded in away finals against Adelaide, Richmond and Collingwood. They never took the final step in that evolution to became a team greater than or even equal to the sum of its parts on the scoreboard and in the win column.

And their aggression was not the controlled type, like Hawthorn over Sydney in 2014, but rather a generally self-defeating, haphazard mess, with the exception of last weekend.

But damn, they’ve stirred up a tide of negative passion that the coiffed premierships would not have. I ended up despising the generally upright Callan Ward not for walking out on the Dogs in 2011 but simply for being the captain of such an annoying bunch of players.

I truly mean this seriously: becoming a team of prats – and a prat team – was necessary. It meant they couldn’t be ignored. They created friction with the universe.

They became a football club. 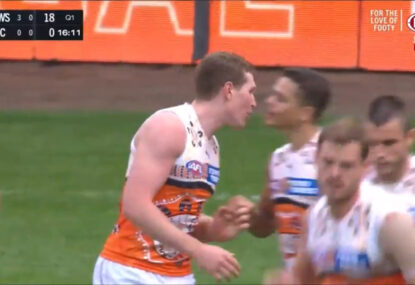 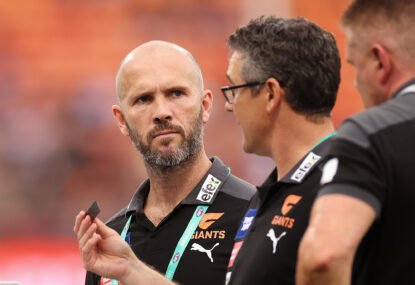