Three weeks into the 2019 season and the strange results that make college football such a great sport keep on coming.

In case you missed the action across the weekend, read on for a look at who covered themselves in gridiron glory and who didn’t with the week three edition of winners and losers:

Winners
Brigham Young: Preseason I figured the Cougars would start 0-3 with losses to Utah, Tennessee and USC. Instead, they’re 2-1 after a 31-27 overtime win against the Trojans. Their quarterback Zach Wilson – the so-called Mormon Manziel – is a thrill to watch. Although – as a USC fan – it wasn’t so thrilling for me this weekend.

Iowa: The Hawkeyes record their fifth straight win over in-state rival Iowa State with a narrow 18-17 win after two separate weather delays totalling more than two hours. The Cy-Hawk Trophy remains in Iowa City, the game sealed on a muffed punt return by Iowa State where two of their players collided with one another turning the football over. This was by no means an instant classic, but a win against your rivals is always sweet. 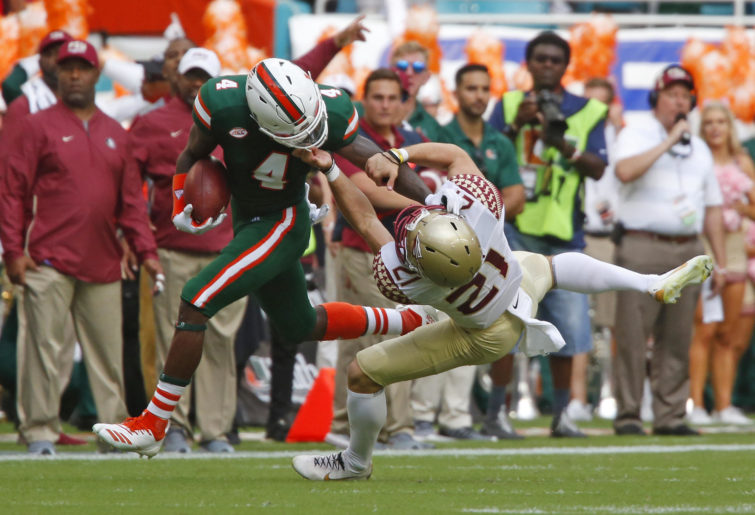 J.K. Dobbins: The Ohio State running back had 193 yards and a touchdown – going at 8.8 yards per carry – as the Buckeyes smashed Indiana 51-10. Dobbins also scored a receiving touchdown, and it’s clear to see that Ohio State looks dangerously good.

D’Eriq King: The Houston quarterback became the first player to rush and pass for a touchdown in 14 consecutive games. The last man to do that was the Heisman Trophy-winning Tim Tebow.

Kansas: The Jayhawks are 2-1 under new head coach Les Miles after a 48-24 belting of Boston College on Friday night. It was KU’s first road victory against a Power Five opponent since a win over Iowa State all the way back in October of 2008. Finally, a little cause for gridiron optimism in Lawrence.

Clemson: Survived a potential trap game against Syracuse with a 41-6 win, and with their upcoming schedule – Charlotte, North Carolina, Florida State, Louisville, Boston College, Wofford, NC State, Wake Forest and South Carolina – I can’t see anyone beating them even if Trevor Lawrence continues to turn the football over.

Jacksonville State: The Gamecocks trailed by 21 after the first quarter, 14 at halftime and 17 after the third quarter but rattled off three touchdowns in the fourth for a 49-45 win.

Southern Mississippi and Troy: The two teams combined for 42 fourth quarter points including touchdowns on three consecutive plays
– including back-to-back kick-off returns for touchdowns – in the space of just 25 seconds, in a wild ending to a game that Southern Miss won 47-42.

Central Florida: The Knights might just have proven that Stanford are beyond woeful this year by recording a 45-27 win over David Shaw’s squad, in which they were up 38-7 at the half. It was Central Florida’s first ever win against a PAC-12 opponent, and freshman quarterback Dillon Gabriel threw four touchdown passes among 347 yards eviscerating the Cardinal. Like it or not – and for the record, I’m okay with it – UCF are in the playoff conversation at the moment.

The Citadel: The FCS squad beat FBS opponent Georgia Tech 27-24 in overtime, rolling up 320 yards of rushing offence. Coming into today’s match-up, they were 0-22 against ACC opponents.

Tennessee: finally, the Vols get a win, beating Chattanooga 45-0. The world as we know it might actually have ceased to exist if Tennessee had lost today. 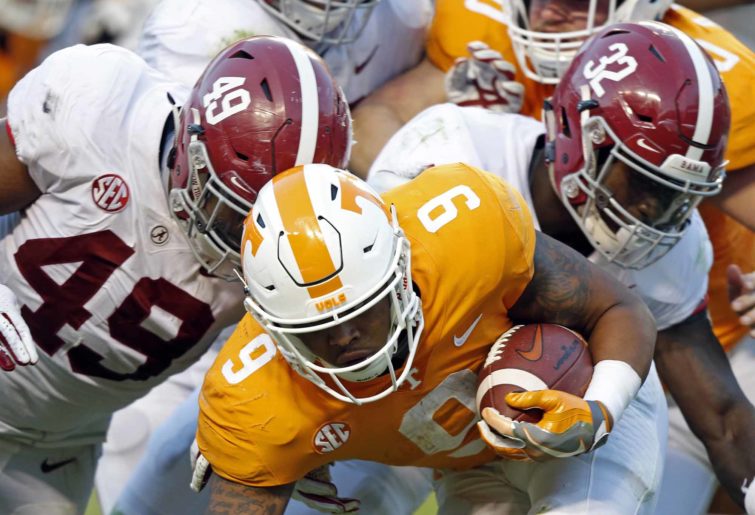 Losers
Pat Narduzzi: A real head-scratcher from the Pitt coach. Down 17-10 to Penn State with less than five to play, Narduzzi elected to send out the field goal kicker on fourth and one from the Penn State one-yard line. The kick missed, Pitt lost the hundredth meeting with Penn State and afterward Narduzzi rationalised his decision by saying that he needed two scores to win the game – which isn’t quite true. A strange call, but one that Narduzzi said afterwards that he doesn’t question “at all”.

Colorado State: Warning bells have to be ringing in Fort Collins where the Rams have given up a total of 109 points in two losses against FBS opponents – Colorado and Arkansas – and Mike Bobo’s quest to right the wrongs of a 2018 season where they went 3-9 is not off to a good start.

Illinois: The Illini had a shot at starting 3-0 for the first time in eight years – which is a nice platform to springboard you towards a trip to a Bowl game – but instead fall to 2-1, losing to Eastern Michigan 34-31 on a 24-yard field goal as time expired. Yet one more bad performance from a Big Ten team. Oh, and they paid EMU a million dollars to schedule this game. Lovie Smith termination whispers are going to start getting a little louder this week, I think.

Indiana teams: Yes, Notre Dame won handily – albeit only to New Mexico – but aside from that, it was a bleak day for FBS teams in the Hoosier State and it looks like being a bleak year too. The Hoosiers were thumped 51-10 by Ohio State in Columbus – giving up nearly 200 rushing yards to J.K. Dobbins – then Purdue were handled 34-13 at home by Texas Christian, totalling less than 200 yards of total offence. The Old Oaken Bucket game at the end of the year is shaping up as being – at best – a winner-goes-to-a-Bowl affair. At worst, it could be a match-up of 5-7 teams. At least FCS Indiana State won.

Maryland: The Terps came crashing back to earth after two weeks of scoring 60 or more points, losing to unranked Temple 20-17. They managed only 13 total yards in the final quarter, and lost 20-17.

Michigan State: The Spartan defence managed to keep Arizona out of the end zone until the last minute of the game, but the offence never showed up to take advantage of that domination. Sure they had 404 yards of total offence, but they managed just one touchdown losing 10-7 at home after a game-tying field goal was disallowed due to too many men on the field – and the follow up kick with penalty yardage added missed. The seat under Mark Dantonio is really starting to heat up.

Boston College: The flip side of Kansas winning Friday night is how the Eagles managed to lose. A week earlier, Kansas scored a grand total of 12 points against Coastal Carolina, yet Boston College allowed them to score 48 which is a grim state of affairs. There’s a long week ahead for Steve Addazio and his staff.

Californian teams: Another disappointing state-wide effort at FBS level. USC couldn’t stop Brigham Young quarterback Zach Williams and suffered some mistakes from freshman quarterback Kedon Slovis to lose 30-27 in overtime out in Provo. A little later, UCLA were wiped out by a rampant Jalen Hurts – 439 yards of total offence and four touchdowns – as the Bruins got off to a 0-3 start by falling 48-14.

Feleipe Franks: Horrible injury suffered late by the Florida quarterback. Almost certainly a season-ender because your leg just isn’t supposed to bend back like Franks’ did. That’s hard to watch, but I hope he’s okay. Florida at least rallied for the win against Kentucky, but that’s of small consequence when compared with the health of their veteran leader.