Can the Irish Messi fire the Jets to glory?

Wes Hoolahan, a man known for his ten-year association with Norwich City and representing the green of Ireland with distinction, will this season be displaying his sizeable talent in the A-League, having signed a one-year deal with the Newcastle Jets.

The capture of the attacking midfielder created far less fanfare than their 2012 signing of Emile Heskey. The former England striker’s arrival at the Jets was greeted with much hullabaloo, and spawned the now infamous Heskey-cam, when Fox Sports gave Aussie viewers the chance to watch the big man’s every move during a game against the Melbourne Victory, much to English fans’ bemusement.

Hoolahan joins the likes of Damien Duff, Liam Miller and Andy Keogh as former Republic of Ireland internationals to head to these shores, but at the ripe old age of 37, what can the man dubbed the Irish Messi offer a Jets side looking to improve on last season’s seventh-place finish?

The Messi comparisons may be slightly tongue in cheek, but it’s clear the Shelbourne product has guile and creativity in spades. Coach Ernie Merrick bemoaned his side’s decision-making in the final third last season, so the expectation will be Hoolahan can provide the bullets for another new signing, striker Abdiel Arroyo. The Panama international joins on a season-long loan from parent club Arabe Unido.

Hoolahan can also pass on a wealth of experience to his team-mates. With 323 appearances and 47 goals in the yellow of Norwich, his place in Carrow Lane folklore is firmly assured. He also boasts 43 caps for his native Ireland and three goals, one of those coming in Euro 2016 in a 1-1 draw versus Sweden.

The Jets will be hoping that promising teenage duo Jack Simmons and Angus Thurgate can learn first hand from a man who has spent the bulk of his career in the EFL Championship and Premier League.

Of course, concerns have been raised about the Irish schemer’s age, which were predictably shot down by Hoolahan upon his unveiling. He insisted he was in fine fettle, quoting the old adage that age is just a number. 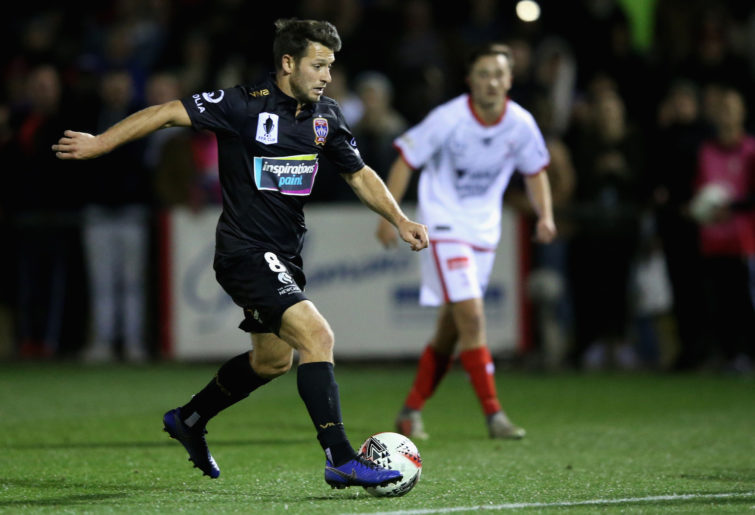 Unlike the arduous nature of a Championship season, the A-League should be more forgiving, with no Tuesday/Saturday slog or wet windy nights in Stoke. Hoolahan will be trusting his game time will be managed accordingly, and he is given ample opportunity to rest any weary muscles in between.

Hoolahan will be sporting the number eight jersey this campaign, and he got off the mark with a goal in the Jets’ 5-1 FFA Cup win against NPL Northern NSW side Edgeworth Eagles three weeks ago. Adelaide United will surely provide a stiffer test in Tuesday night’s upcoming quarter-final clash.

Despite his advancing years, I’m backing Wessi to show the A-League what he is all about. A player of genuine quality with a wand of a left foot, if his body still allows, he should delight Australian audiences. With Arroyo and fellow attackers Dimi Petratos and Nick Fitzgerald also in tow, the Jets should be a fun proposition this year, and will be quietly confident of making the top six.

Who knows, if the mercurial Irishman can continue to bamboozle defences, perhaps Fox Sports will grant us the Hoola-cam so we can all marvel at his wizardry.