Australian rugby league history books will need to be rewritten following the Parramatta Eels monster victory over the Brisbane Broncos in the NRL’s second elimination final on Sunday afternoon. Here are my talking points from the game.

Parramatta must play the same style against Melbourne
There are few tougher things to do than go and play a finals match, particularly a knockout one, in Melbourne, against the Storm, who are coming off a loss and will be fuming.

There is absolutely no sugar-coating the challenge the Eels are about to face after they blew Brisbane out of the water 58-0 yesterday at Bankwest Stadium, improving their impressive record at the venue to nine wins from eleven games.

Of course, you’d pefer to be in the Eels position than the Broncos one.

While Parramatta have struggled away from home this season, they played a style yesterday which could just come off against Melbourne.

At times, it was erratic, and they may need to tone down the volume of 30-metre spiral passes and switch plays slightly, but the formula and blueprint, one that is damn hard to defend against, has now been laid by the men in blue and gold.

Sure, things got pretty easy with Brisbane dropping off tackles like the proverbial fly, and then all but giving up down the final 15 minutes of the game, Parramatta were throwing it around from the opening minutes.

If Parramatta attempt to get into a grind with Melbourne next week, then there is no way around it – they will lose. They don’t have the forwards and the control to go with the Storm for 80 minutes.

Play like they did yesterday though, and the chance stands. What’s more, they have the talent to pull off yesterday’s game plan, with Mitchell Moses, Clint Gutherson, Dylan Brown and Reed Mahoney possessing four of the best passing games in the competition, and the back five all being dangerous, particularly Maika Sivo, who came away with two tries yesterday.

Are the Eels going to beat the Storm? No, probably not.

Can they make it interesting and keep themselves in with a chance? Yes, absolutely. 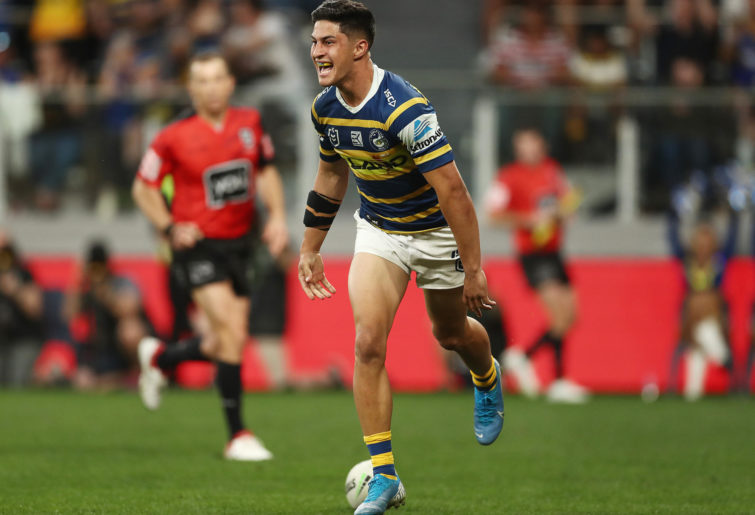 Brisbane need to be careful about overreacting
While it was all celebration and jubilation for the Eels and their 30,000 strong crowd at Bankwest Stadium, there were 17 very lonely players, and one very frustrated coach in the middle of it all.

The Broncos will not want to know they are in the record books for the biggest ever finals look in top flight Australian rugby league, but they are.

And understandably, there is going to be a major fallout for the club from their second failed season in a row after they lost to the St George Illawarra Dragons in the first week of last year’s finals series.

Neither loss is great, and although they were under different coaches and systems, the one-team town club must pick up the pieces and get things right for 2020.

With the exception of a couple of subtle changes though, not too much should be changing for 2020.

Sure, Anthony Seibold still has a lot to learn, and sure, criticism could be directed at ageing skipper Darius Boys (more on this shortly), but they have a talented nucleus coming through the club, and it needs time to prosper.

The fact they mad the top eight with the amount of youth on the roster is a positive in itself, and many of those players will be better for the run when they come around to getting the 2020 season underway next March.

The last thing the Broncos want to do right now is find a new coach, change the entire spine and work out how many forwards they are letting go.

Of course, if a good half is available, they should go chasing for some experience more than anything else, but the formula is there for the club. They aren’t miles away, and one terrible afternoon at Parramatta shouldn’t change the fact they have had a reasonable season, made the top eight, and will build on this for 2020.

Nathan Brown is critical to Parramatta’s forward pack
While the Eels did win their Round 25 clash against the Sea Eagles to ultimately book what proved to be the far easier of the two elimination finals, they didn’t look all that crash hot in doing so.

Just like when they were forced to play without the injured Blake Ferguson, they missed big metres and aggressive running in the middle third from Nathan Brown during the contest.

A I’ve mentioned, the Eels performance was a complete one on Sunday, but Brown added a spark that was hard to match in the middle third of the park.

Throughout the game, it was fairly rare that the Eels weren’t on the front foot, but there were times where they had to defend their line and then work the ball out of trouble.

Alongside Ferguson, the one guy who constantly stuck his hand up to do the hard yards was Nathan Brown. But it’s not just the intention to do so, it was the execution.

He regularly bent the line, causing the Brisbane defenders all sorts of bother, and tackled with aggression.

It’s the aggression which the Eels will need if they are to match it with the Storm next weekend, and Brown will need to lead the way from start to finish. 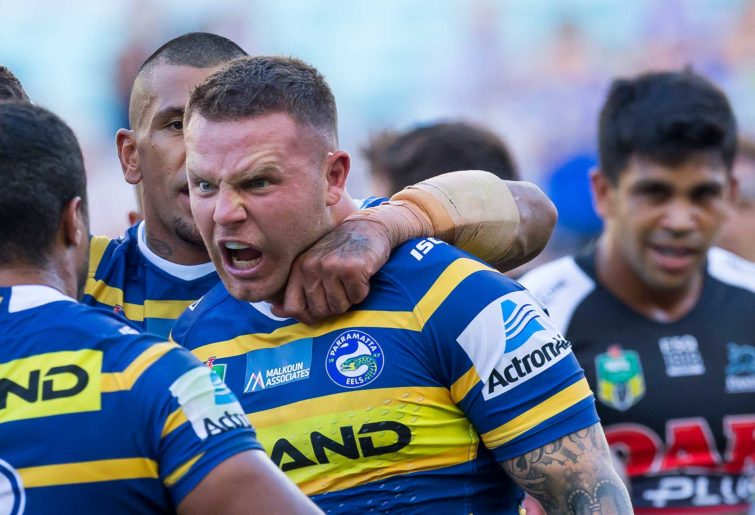 Payne Haas to lead Brisbane into the future
There were few, bordering on absolutely zero bright spots in Brisbane’s loss, but as has been the case all season, win, lose or draw; hail or sunshine, Payne Haas was one of their best.

He was the only Bronco to go close to cracking 100 metres, while his 80-minute performance in the middle also saw him lead the tackle count for the Eels. While it didn’t lead to anything, he also offloaded the ball three times, made a couple of breaks and was a constant threat to Parramatta’s otherwise rock-solid defensive line.

While Haas couldn’t spark anything, attacking-wise, he has gone from strength to strength just about every time he has stepped onto the field in 2019.

He will surely win rookie of the year at the Dally M ceremony in a couple of weeks, and is primed to take over leadership of this Brisbane pack in the coming years.

While Matt Lodge provides a chunk of consistency in the middle third, there are few players who can match the motor of Haas in the prop position.

To play 80 minutes, or big minutes at the very least, week in and week out with the impact he has, having played less than 30 first-grade games, is outstanding.

While there are a number of young guns in the Broncos pack, and guys will be jostling for position next year, there is no question Haas is their big name, and must lead the Broncos into the future.

Reed Mahoney: The hooker most clubs would love to have
While Haas has been the best of a talented group of rookies through the 2019 season, one who has gone by the wayside a little bit in discussions around those who have burst onto the scene is Reed Mahoney.

I know, strictly speaking, Mahoney isn’t a rookie as he had nine games last year, but in terms of starting and wearing the number nine jersey consistently, this is his first real NRL season.

The young Parramatta hooker was sensational yesterday, as most of the Eels team were, but what has been so impressive about Mahoney this year is how calm he is under pressure, and the way he is able to just churn out work in the middle third of the park.

In fact, to be in his first season of fulltime work and to be right up the top end of the league for tackling, as well as playing a large part in a well-drilled, exciting Parramatta side, is superb.

While he only had to make 28 yesterday, Mahoney led the Eels for tackling again, and was great in getting quick service to the rest of his side out of dummy half.

It’s that fast, direct style of play which makes the Eels look so good, and why they were able to rip the Broncos in half yesterday.

While, again, it was a team effort, a performance like that never comes close to flowing without a quality dummy half, and for Mahoney to rise to the occasion and play the way he did in front of what was an enormous crowd, only speaks good things about the kid.

With the complete lack of options around the Maroons number nine spot, don’t be surprised to see Mahoney called into Origin camp in 2020. 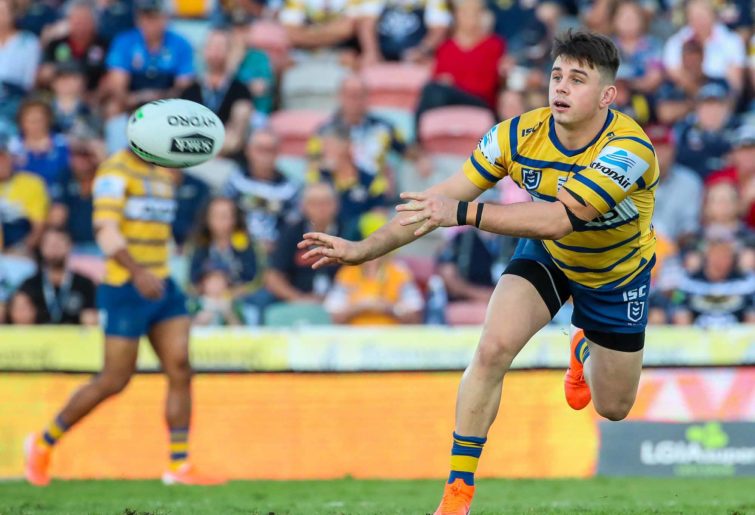 Should that be the end of Darius Boyd?
I know, I know. I did talk about how the Broncos can’t afford to overreact to a single finals loss.

But, there is no question that, after what has been a really difficult season, seeing a position swap and form as inconsistent as any you’ve ever seen, Boyd’s days in the NRL are numbered.

I don’t like death riding individual players, and this is in no way, shape or form putting yesterday’s loss on Boyd – that’s not true – but it’s more of a culmination of the entire season.

For just about every other player on the Broncos roster, you can see why they will challenge for a spot in the top 17 next year.

And as club captain, Boyd should be doing that, but the simple truth remains that Boyd simply isn’t in the best 17 at Brisbane anymore.

He isn’t the best fullback, and he won’t be in the best halves combination with Thomas Dearden, Sean O’Sullivan and the surprising Jake Turpin floating around.

While Boyd wasn’t particularly bad yesterday and at least put his body on the line in defence a couple of times, even if that was without much success in slowing down a blue and gold freight train, the Broncos defence was a trainwreck. An absolute shambles.

They were flat-footed, directionless and running around like a pack of lost sheep rather than a well-drilled rugby league team.

Again, some of that is back on Seibold, but Boyd, as captain and as a creative player in the side, needs to cop some of the brunt for that loss, and if he is serious about the club moving forward, he will slip off into retirement before start of the next pre-season.