The only undefeated side in 2019 with all the form you could hope for in a World Cup year, the Springboks are chasing a very realistic third Web Ellis trophy in Japan.

The South Africans won their first-ever Rugby Championship crown thanks to wins over the Wallabies and Argentina with a draw against the All Blacks in New Zealand sandwiched in between.

Another victory over the Pumas was followed by a slice of redemption from their last World Cup campaign, avenging their loss to Japan in the 2015 edition with a dominant 34-point win over the tournament hosts.

Stormers big man Siya Kolisi has been given the reins as captain, having overcome a knee injury to be fully fit for the tournament.

Former skipper Warren Whitely and utility back Damian Willemse were sadly on the other side of the fitness coin, missing the plane to Japan with injuries of their own. Young star winger Aphiwe Dyantyi is also out of the tournament after returning a positive doping test in July.

Strengths
The Springboks defence has become their biggest asset in recent times as they lean more on their ability to contain and concede very few points as a priority over their attacking prowess.

In 2019, the most points they’ve conceded in a game is 18, they haven’t shipped more than two tries in a single match, and there have been three fixtures when the Boks have only let in a single meat pie. They love to grind teams down defensively, forcing errors and turnovers seemingly at will when in peak form.

Even in their one match against the much-fancied All Blacks, South Africa let in just one try on their way to a 16-all draw. To put that into context, out of 133 Tests New Zealand have played in the last decade, they’ve only scored under 16 points on six occasions!

While the Bokke tackling has been on the up since the departure of Alister Coetzee, it’s their dominance at the breakdown that is the real gamechanger for the two-time world champions.

They’ve had a higher percentage of rucks won than their opposition in each of their last nine Tests. With guys like Pieter-Steph du Toit, Francois Louw and Kwagga Smith tearing around the rucks, often for the full 80 minutes, it will be a tricky facet of the game for their opposition to manage in Japan, let alone counteract. 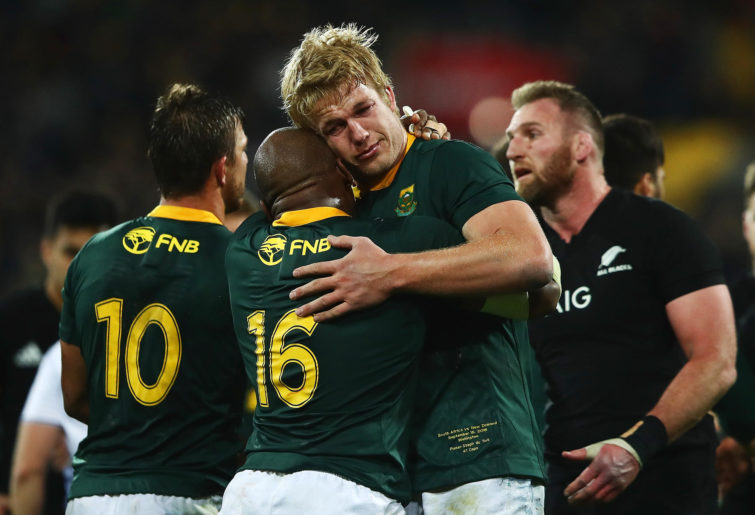 Weaknesses
It’s difficult to pick off a weak point in a side that’s on such a roll. Erasmus has fixed many of the weaknesses that had hampered them after the 2015 tournament. If you were to pick at any aspect of the side, it would be their wide men.

Without the ball, the left edge has been found wanting, and their right-wing defence has been guilty at falling inwards as well even through their current undefeated run.

In broken play, the Boks’ wingers have often been out of position to cover the counter-attack, which leads to either conceding points or relying on their sweeping cover defence to make the saving tackle.

South Africa’s defensive strengths have been highlighted above, but the weakness which comes with being able to hold their opponents in the middle of the ground for phase after phase is that their edges inevitably creep inwards as the play goes on. They’ve been opened up out wide on a number of occasions because of it.

The Springboks have some outstanding wingers in their squad, genuine finishers and players with plenty of pace to burn. But they lack Test experience, and that shows in their ability, or lack thereof, to read the defensive line and position themselves. It’s a slight crack in an otherwise sturdy wall.

Key Player: Faf de Klerk
Both of South Africa’s World Cup victories were masterminded by a superb no.9 operating at the base of the ruck. In 2007 it was Fourie du Preez, while the great Joost van der Westhuizen was the key in 1995. It’s no surprise to see the current scrumhalf here as their most important player for the 2019 campaign.

Little Fabio was always a reliable contributor during his early days as a Springbok, but his move to Europe for a stint with the Sale Sharks has transformed Faf de Klerk into one of the top halfbacks in world rugby.

With his exposure to northern hemisphere rugby over the last few years, de Klerk has been able to evolve his outstanding passing repertoire, add a new running game to the mix, and build on his fantastic match awareness. And that’s not even mentioning a box kick which is right up there with the best in the world.

In short, he’s now become of the most intelligent and savvy ball handlers in the game today.

While Kolisi may have the captaincy next to his name, de Klerk will be vital in leading the Springboks around the park.

Verdict: New Zealand’s biggest threat
The Springboks’ main opponents this World Cup will be their first. They take on the All Blacks in Yokohama in their opening match to likely decide who tops Pool B.

A win would probably see them face Scotland in the quarter-finals and a semi-final clash with any of England, Wales or Australia, three teams they are very capable of toppling on their day. A loss and accompanying second-place finish would lead to Ireland in the quarters and Wallabies or Wales a week later.

In any case, a trip all the way through the knockouts, regardless of their pool result against the All Blacks, would bring them full circle back to New Zealand.

Can they topple the giants of world rugby to deny a historic three-peat? They have as good a claim as any other side; the last three contests between the All Blacks and Springboks have produced one win for each side and a draw, and the two winning margins have been identical.

But despite their dominance this year and outstanding strengths across the park, it will a tremendously difficult task to knock off the defending champions in the final.