Make no mistake, contributing to this definitive top 50 list was no easy task, and I know from my 50 alone, fifteen players from ten different countries didn’t the cut, and more than a few of them are greats of the game in their respective countries.

Regardless, it’s my honour and privilege to bring us into the top ten, and as there has been throughout this series already, there are some serious names here.

It wasn’t difficult writing about these guys, only tricky to keep to the word limit!

Let’s see who made the top ten…

What remains so memorable about his career is that it’s almost impossible to just say ‘Bryan Habana’. It’s always Bryyy-an Ha-BAAAANNAAAH! And that was the genius of the man, his uncanny knack of bursting through the hole at exactly the same time the commentators were reaching the second syllable of his surname, setting up try-scoring opportunities and volume bursts simultaneously.

But the other common denominator was his sheer speed and phenomenal finishing ability. Not many players could finish a try like Habana, but then not many had a volume-increasing second syllable like Habana.

Then there were those long sleeves in 2007. Habana loved a long sleeve. And often that meant the lengthy compression top under the jersey, but in 2007, Canterbury looked after Habana in the best possible way by extending the sleeves on his Boks jersey. All. The. Way. And they looked so good, John Smit went with the long sleeves in the final too. What a legacy. 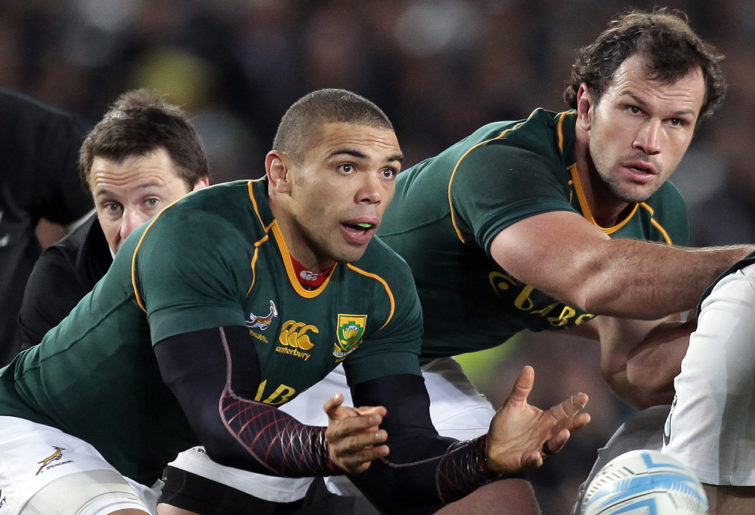 As my university playing days were coming to an end almost as soon as they started in the early ’90s, I started noticing international scrumhalves more, and the tall No.9 from South Africa was right up there as the Springboks emerged back onto the international scene.

I was always captivated by the van der Westhuizen pass; it was just always so scathingly accurate, and none more so than the one for Joel Stransky’s field goal in the final against New Zealand in 1995. Or so I thought.

In the lead-up to the 2015 tournament, I had the privilege of writing a magazine feature piece on great World Cup field goals, headlined by Stransky’s kick and Stephen Larkham’s monster against South Africa in the 1999 semi. Stransky dented my memory of van der Westhuizen’s pass like only the man on the receiving end of it could…

“Joost’s pass went left, to my right, which did force me to adjust,” Stransky stunned me back in 2015.

“But it was actually spot on,” he said, quickly easing my fears. “It’s a natural adjustment to get the body and hips into the right direction, as well as getting into the space (Graham) Bachop and (Andrew) Mehrtens had left.

“Joost made the pass back, and as they say, the rest is history.”

Sadly no longer with us, van der Westhuizen will always be remembered as perhaps the greatest Springboks scrumhalf. And one pass not quite as straight as I remembered can’t change that. 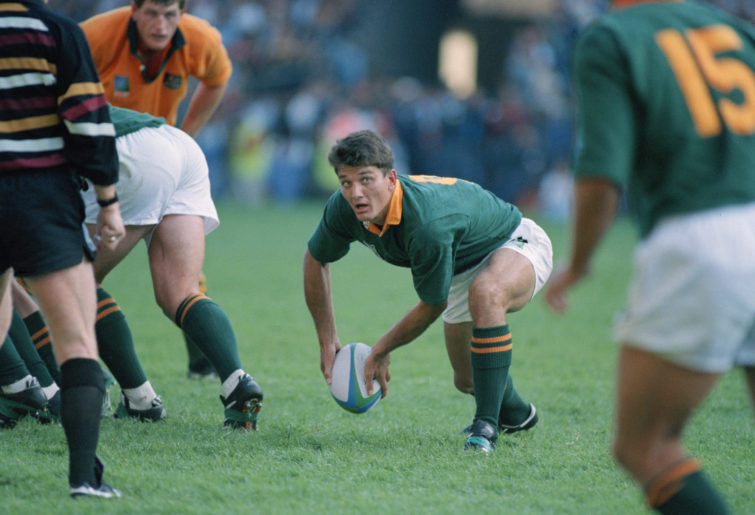 It probably says something about Dan Carter’s standing in New Zealand rugby that several times this year, and most recently after the loss in Perth – even if only fleetingly – the idea of recalling Carter to the All Blacks no.10 jersey did come up, even though he’s not played a Test since the win over Australia in the 2015 final.

In all, Carter played in four Rugby World Cups going all the way back to 2003, where he started in three games and played off the bench in two others the same year he debuted with the Crusaders.

His 2007 and 2011 tournaments don’t sit well in the memory for different reasons; 2007 for the debacle of that lost quarter-final in those grey jerseys, and 2011 for the groin tendon tear that ruled him out of the Cup on home soil before the knockout stage even began.

He kind of made up for both of those disappointments at the fourth attempt, though, with a 19-point game in the final – his highest tally in a World Cup game – in the 34-17 win over Australia. But it wasn’t just the points that were important, but when he scored them.

New Zealand’s lead was only four when Carter kicked a drop goal in 69th minute (which was only five minutes after Tevita Kuridrani scored to put the Wallabies back in the game), and a 74th-minute penalty put the margin out to ten.

The All Blacks would score again from there, but those two moments needed someone, and for New Zealand, that someone was more often than not Dan Carter. 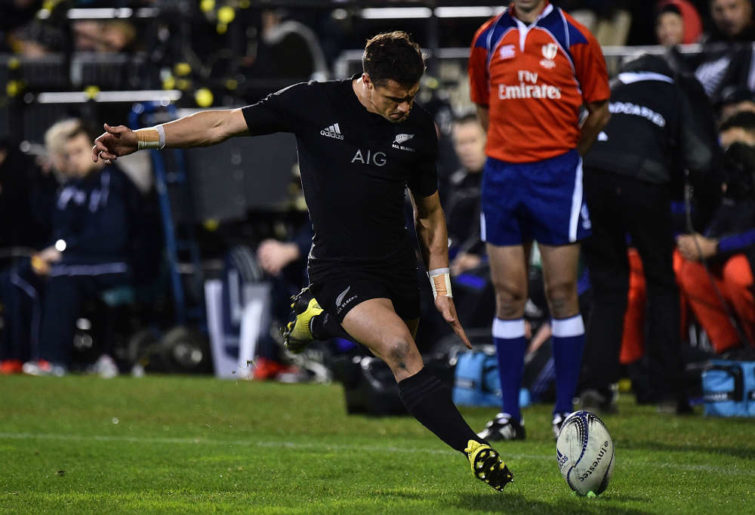 101 Tests for the Wallabies in all, and 15 caps over three tournaments among them, but there really is only one David Campese World Cup moment worth talking about. We all know what it is.

The 1991 semi-final against New Zealand, Lansdowne Road heaving with more than fifty thousand fans in. Campese had already scored a pretty memorable try himself, a slicing run that started from first receiver in front of the left-hand upright and finished with the right-winger diving into the left corner to score.

Michael Lynagh chip-kicks ahead from just inside the Australian half, into acres of space behind the All Blacks line in front of fullback Kieran Crowley. Campese wins the race, steps off his right to beat Crowley and regather in the one motion, then off his left toward winger John Timu, then away again off the right to leave Timu behind, and just as scrumhalf Bachop arrives from nowhere, throws the miraculous no-look pass over his right shoulder for Tim Horan who had looped around on the outside to score what would be the winning try.

Incredible skill. And still holds up well against anything we see in the modern game. 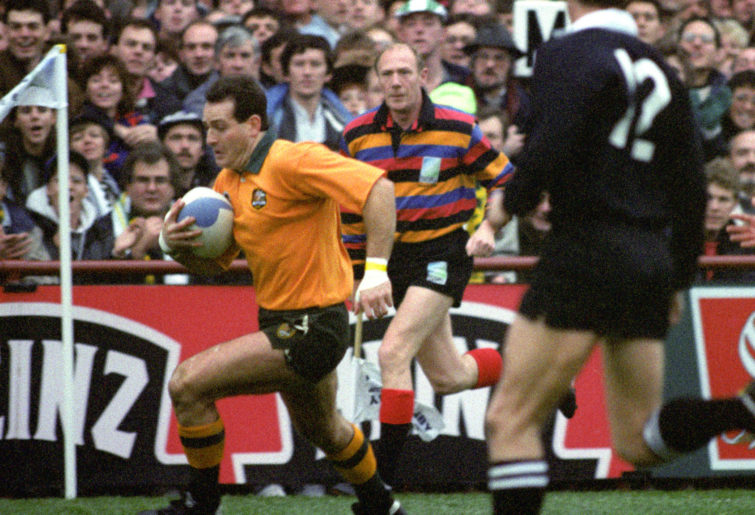 One of a very select group of players to have won two World Cups, and one of only seven men to have held the William Webb Ellis trophy aloft at the end of a tournament, Eales’ own Rugby World Cup highlights reel isn’t exactly full of wonderful moments of personal brilliance, which in truth is the perfect reflection of the player he was.

Eales played 15 Rugby World Cup matches across the 1991, 1995, and 1999 tournaments, by which time he was Australian captain, and even that stats sheet reads a little bare. He kicked four conversions in one game against Romania in 1995 (the iconic green and gold striped Wallabies jersey, for the eagle-eyed), and then one more conversion against Romania and a penalty against Ireland in 1999. But that was it.

But with Matt Burke kicking everything presented to him in 1999, Eales was an instrumental part of a Wallabies set-piece that delivered much of the front-foot ball and plenty of the penalty opportunities that his fullback converted.

It was Eales’ quick ball off the top of a second-half lineout that gave George Gregan the time and space to throw the flick pass in-board to Owen Finegan – “Go for the line, man!” – and after he was mobbed by teammates on fulltime, took his place in history after receiving ‘Bill’ from Her Majesty, the Queen. 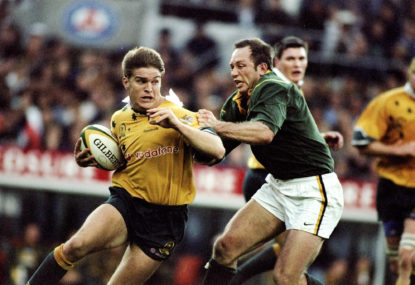