Welcome back to this weekly column on the National Football League, a cocktail of light-hearted musings, analysis – and of course gambling.

Yes, I’ve already changed the title but we’re sticking with this now, I promise. Let’s kick-off.

First and goal
We tend to overreact to Thursday Night Football; it’s primetime and the entire league is watching. However, the Panthers, on the back of their lacklustre loss to Tampa, are staring down the barrel of their season.

If they lose to the Cardinals in Arizona it could be lights out for Cam Newton and company. Newton is obviously playing hurt and his offensive line is doing their best to ensure his premature retirement.

The former league MVP is not the mobile threat he once was so now opposing teams will look to stack the box and nullify Christian McCaffery. On the opposing side line, the Cardinals have looked competent thus far.

Second and goal
Daniel Jones is officially the Giants’ quarterback, replacing two-time Super Bowl champion Eli Manning – even after all these years that still pains me, a Patriots’ fan, to write.

While I’m interested in that situation and how New York’s hefty investment pays off, what fascinates me most is Manning’s situation. Playing quarterback in the NFL this year is essentially a death wish.

Around the league QBs are falling like flies so is there a chance a desperate rival makes the call to the Giants? I know Nick Foles is likely to return but if Jacksonville can acquire Manning on the cheap this could be a nice landing spot.

It would mean Manning reunites with former Giants head coach, and current Jags’ executive vice president of football operations Tom Coughlin. These two won Super Bowls together (*shudders) and if anyone can get the best out of Manning it’s Coughlin. 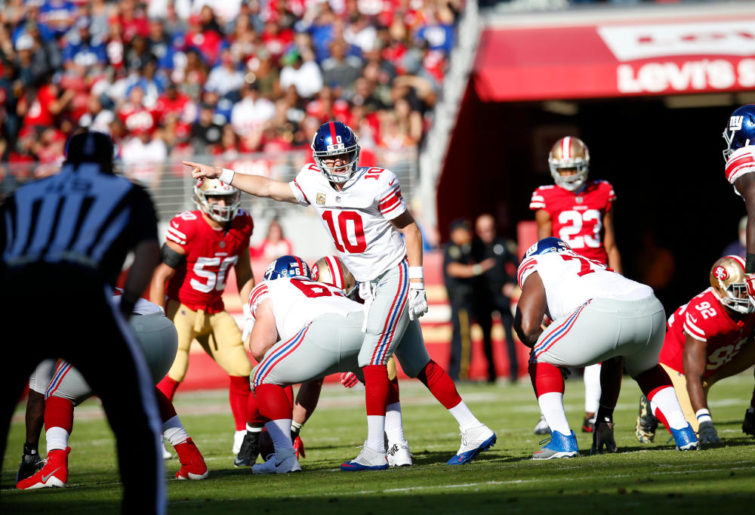 Third and goal
I predict Atlanta will be inconsistent and mostly frustrating this year, but the play-call to win the match was American football pornography. I’m not sure who to credit between Matt Ryan and coordinator Dirk Koetter, but the wide receiver screen that set-up Julio Jones was the perfect answer to Philadelphia’s cover zero blitz.

Tackle Jake Matthews made it possible with his athletic kick-out block in a game that came to life in the fourth quarter following a dour struggle in the first half. It’s obviously early days but this call is the play of the year thus far and I haven’t stopped watching it.

Fourth down
This week we are headed for a showdown between two of the best performed quarterbacks in the league. Lamar Jackson and his Ravens take on reigning MVP Pat Mahomes at Arrowhead, in what should be a high-powered explosion of two good offenses.

Baltimore teams typically have stout defenses but Arizona moved the ball effectively against them last week, merely held back by red zone efficiency. The Ravens’ secondary will have to lift their game to compete with Kansas City’s ridiculous offense, but I think they’re good enough.

Baltimore’s legitimacy will be put to the test on Monday morning, and there’s no bigger assignment than the Chiefs at home.

Challenge flag
We won’t get the answers this week but I’m throwing my red hanky at the 49ers. You can only beat the opposition in front of you but they’ve handled Tampa and the Bengals to start the season 2-0.

They now get a Ben Roethlisberger-less Steelers at home so will likely stay undefeated. But just how good are they? Jimmy Garoppolo has seemingly kicked his pre-season funk and Kyle Shanahan’s offense is as advertised. I want to see more but there’s a chance San Francisco is the second-best team in the division behind Los Angeles.

Send in the punt team
The injury-ravaged Eagles let us down last week. This weekend I’m parlaying Arizona (+2.5) and Washington (+4) at the line. I think the two home underdogs will at least cover if not get the job done. 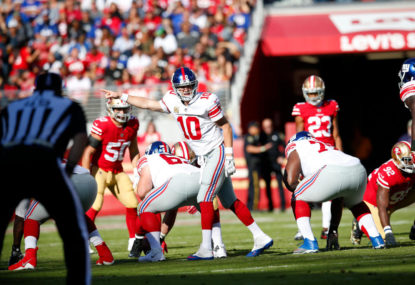