The Wanderers take their first step from franchise to proper club

The 2016 movie about the birth and origins of McDonald’s titled The Founder was hardly a memorable one, but one line always did stick out to me.

“You’re not in the burger business, you’re in the real estate business.”

Perhaps that line resonated with someone at the Western Sydney Wanderers as well.

As the Wanderers prepare to embark on their eighth season in the A-League, their list of achievements makes for some impressive reading.

On the pitch, they claimed a premiership in just their second season, won the Asian Champions League in their third and have made the A-League grand final on three separate occasions.

But while the Wanderers were quick to make up for lost time in the silverware stakes, they’ve moved quickly in the real estate race as well.

On Monday, the Wanderers unveiled stage one of their purpose-built Centre of Football in Blacktown.

Three pitches, A-League and W-League change rooms, offices and a media centre are among the highlights of the development, with more to come over the remaining stages. 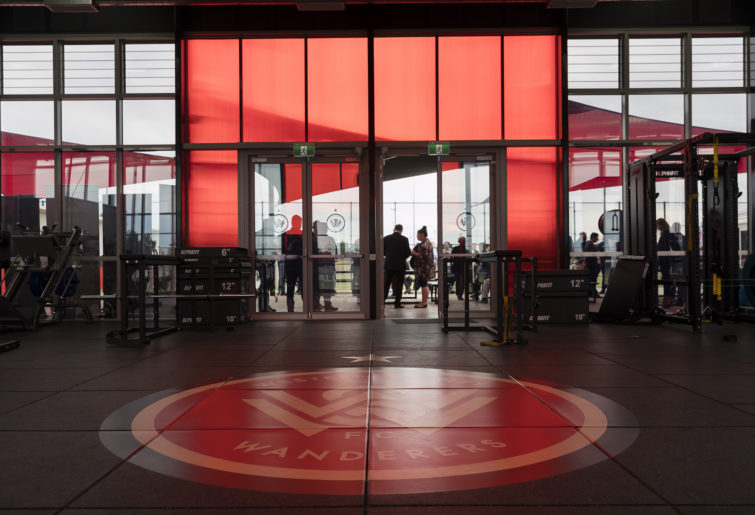 The Wanderers showed off their brand spanking new facility this week. (Photo by Brook Mitchell/Getty Images)

Coinciding with the move back to the rebuilt Bankwest Stadium, it is perhaps the single largest off-field move made by any club in A-League history and the Wanderers have achieved it well within a decade of their existence.

And so they should.

The Wanderers are fortunate enough to find themselves in the insulated top flight of Australian football. They have access to revenue streams the vast majority of football clubs in Australia can only dream of and the means with which to build their own infrastructure.

But even so, the facility the club has developed – without a cent of government money – deserves to be recognised as a massively important step for the Wanderers and a huge challenge to their A-League rivals.

It is, in many ways, the first step a franchise has to take to become a proper club.

This is about more than just a couple of new pitches and an office, this is about giving the club its very own home.

Melbourne City has its own brilliant training base in Bundoora, while the Central Coast Mariners boast a centre of excellence, both of which represent good starts, but neither comes close to the all-round facility the Wanderers have unveiled.

Once completed, the Wanderers’ Centre of Football could be the sort of facility that future-proofs the club.

It will be a place where fans converge to get a look at the players who might potentially represent the club at Bankwest Stadium one day. It’s the place where those players will mould their careers as footballers and a place their families will spend countless hours.

That’s how genuine, generational support for a club is built.

It is the sort of development that opens up a whole new world of possibilities for the club and one that could – when the football pyramid eventually opens up – ensure that no matter what the future holds for the Wanderers, they will always have a home.

Can other A-League clubs say the same? Certainly not.

To be fair to Victory, they have tried to make inroads in this area only to see their recent academy plans for Footscray kicked to the curb courtesy of local protest.

Regardless, this is an area the A-League and its clubs need to do a lot better in.

With rapid progress being made on a national second division with eventual promotion to and relegation from the A-League, the competition’s current franchisees need to ensure they don’t let their massive head start go to waste.

In the end, only the best clubs will survive.