What makes Fiji such a dangerous team for the Wallabies to face in their Rugby World Cup opener is that the tournament gives them the rare luxury of a decent amount of preparation time.

Usually the Fijians get ready for a Test match with a rushed training session or two, and depending on which side of the world they’re playing, that could be on the back of a long flight.

Added to this, some of the top-tier Fijian internationals – as proud as they are to pull on the white jersey – have been squeezed by the club vs country dilemma and the financial power wielded by their European clubs.

The gap between what they earn at their club sides dwarfs the cash they receive for a Test match, and player pressure can be felt even for Tests that fall within World Rugby’s Test window.

A few years ago, Fiji-born No.8 Nathan Hughes, who grew up in the sugar cane town of Lautoka, was asked why he chose to change allegiances and make himself available for England after satisfying residency rules.

The money, not surprisingly.

For the Test he was about to play for England at Twickenham, he would bank a match fee of around £22,000.

It’s an inequality that should be embarrassing to World Rugby, but one which they brushed off earlier this month when All Blacks coach Steve Hansen had a crack at them for not doing enough for Pacific Island nations.

Hansen was talking after his side thrashed Tonga 92-7 in their final pre-World Cup match in Hamilton.

A World Cup is the right time to be addressing these issues, especially given that the Pacific Nations usually push the top-tier nations a lot harder than many expect.

And that’s what the Fijians will do in Sapporo on Saturday in the second match of the tournament following tonight’s opener between hosts Japan and Russia.

So often the strength of Fiji is their athletic and skilful backs, but Wallabies coach Michael Cheika should be concerned about the improvement in the island nation’s forward pack.

Second-rower Leone Nakarawa is a class act, backing up after being named in the 2015 World Cup Dream Team and fresh from top form for French club Racing 92.

No.8 Viliame Mata is a 1.96m, 116kg weapon who runs as freely as Australia’s Fiji-born counterpart Isi Naisirani. Their battle will be intriguing. Nakarawa and Mata both won gold in Rugby Sevens at the 2016 Rio Olympics, highlighting how well they can get around the field.

Plenty of good judges rate Fiji’s openside flanker, Peceli Yato, who is a popular member of the Clermont pack in France. On the other side of the scrum, captain Dominiko Waqaniburotu has spent the last seven seasons in France and is a durable performer. 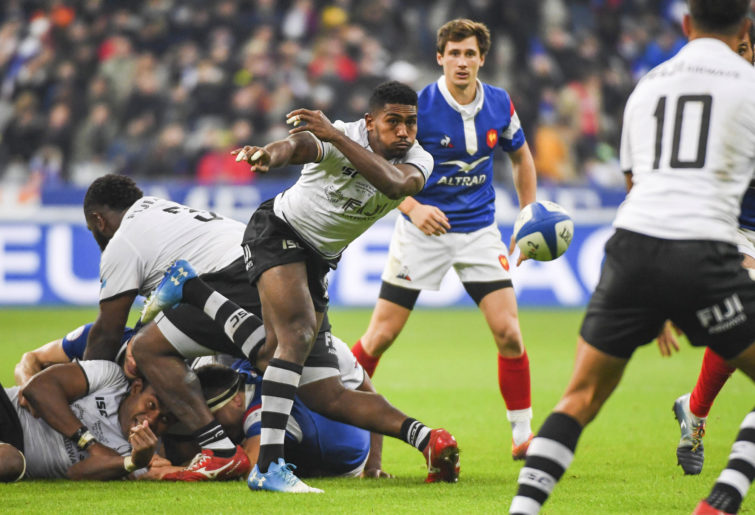 Fiji now have skill all over the park. (Photo by Aude Alcover/Icon Sport via Getty Images)

Much of the Wallabies’ attack relies on the three Fiji-born ball-runners – Naisarani, Samu Kerevi and Marika Koroibete – punching holes in the defence, but it’s not all one-way traffic when it comes to changed allegiances.

Prop Campese Ma’afu, who was named after legendary Wallabies winger David Campese, and five-eighth Ben Volavola were both born in Sydney.

Ma’afu, whose elder brother Salesi played for Australia at the 2011 World Cup, is a solid scrummager and a veteran in his third World Cup.

Volavola couldn’t crack it as a consistent starter at the Waratahs a few years ago, and after short stints at the Crusaders and Melbourne Rebels, has found a home in France with Bordeaux and more recently Racing 92.

He’s blessed with silky skills and a strong kicking game, but as a lightweight No.10, expect traffic to head his way – especially from Kerevi and Koroibete.

But perhaps best known to Australian fans will be Semi Radradra, who has been named on the wing despite playing at outside centre for much of this season at Bordeaux. Radradra scored tries for fun for the Parramatta Eels in the NRL, and he’s been typically destructive in France’s Top 14.

On the other wing, Josua Tuisova is nicknamed ‘The Bus’ and that probably says it all. He was one of Fiji’s best on their way to a gold medal in Rio.

That classy outside back Vereniki Goneva couldn’t make it into Fiji’s starting team speaks volumes. Goneva was one of the six players that started for Fiji when the Wallabies scored a hard-fought 28-13 win over them in Cardiff during the last World Cup. 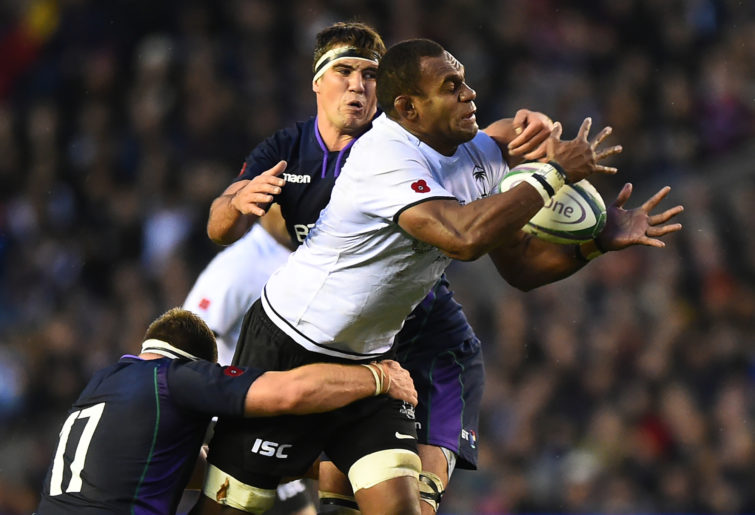 Fiji have the artillery to cause the Wallabies plenty of trouble. There’s a good chance they will be pumped up to prove a point following the recent scrap over whether World Rugby cares enough about the Pacific Nations.

Worrying for the Wallabies will be if Cheika tries to open it up and stretch the Fijians. It will be a tempting strategy given the Wallabies will want to get their attack humming before a pool-defining clash against Wales next weekend.

Australia have found it difficult to score tries against the top teams since the last World Cup, and the Welsh defence proved to be easily the best in the Six Nations last season, letting in just 65 points in five games.

Opening it up might just suit Fiji given their brilliance with the ball. But Fiji’s forward pack, often their weakness, has improved markedly in recent years and to a level in which they can back themselves to match the Wallabies in tight.

And with the Fijians having spent longer training together before a World Cup – much longer than they otherwise get for Test matches in the jammed global calendar that talks down to countries like Fiji – the Wallabies face a much tougher task than Fiji’s world ranking of No.9 would suggest.