With four new teams entering the AFL Women’s competition next year, this will mean a few things – two additional matches in a round, and the potential for Friday double headers.

This comes just twelve months after the league expanded from its original eight-team roster, with the Geelong Cats and North Melbourne making their debut last year.

Next year, the Gold Coast Suns, Richmond, St Kilda and West Coast Eagles will join the league, and with that, you can bet that there will be a number of new blockbuster match-ups to look forward to, not least the QClashes and the Western Derbies.

But while the structure and/or conferences for next year’s draw have yet to be announced, I have given my best shot at what I think the first round next year should look like, and it promises to be massive.

As is the case in the men’s competition, Richmond and Carlton will kick off the new season in front of what is expected to be a massive crowd at Punt Road Oval, with this to double as the Tigers’ first match.

The Tigers have recruited strongly ahead of their first season, landing former Western Bulldogs captain Katie Brennan as well as forwards Sabrina Frederick-Traub and Christina Bernardi from the Brisbane Lions and GWS Giants respectively, thus making them a team to watch under coach Tom Hunter.

Meantime, the Blues will be hoping to build on a strong 2019 season which saw them recover from losing their first two matches of the season to reach the grand final, which they lost to the Adelaide Crows in front of over 53,000 fans at the Oval. 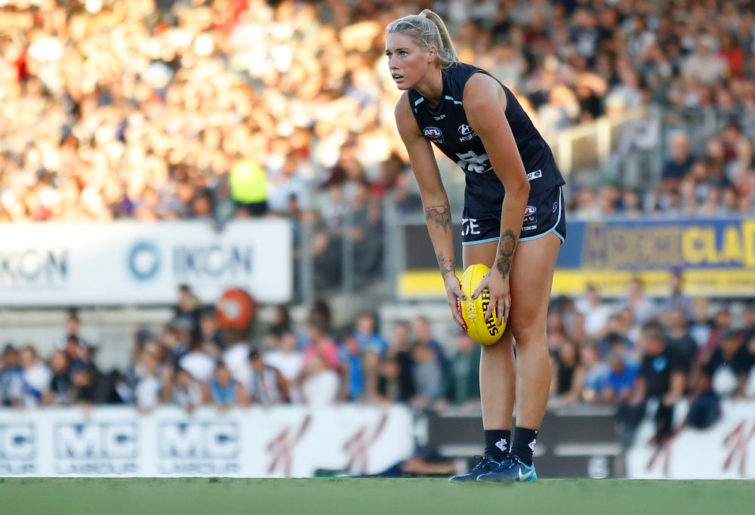 I have scheduled the season opener to start at 6:10pm as part of a Friday double header, with the other match to see the reigning premiers, the Adelaide Crows, unfurl their premiership flag in front of their home fans with a blockbuster against Collingwood at Norwood Oval.

It will be the first time the Crows, premiers in two of the first three AFL Women’s seasons, play the Pies at home, with the two previous meetings between the clubs having been played in Melbourne, while the two teams didn’t meet at all in 2019.

As for the other three new clubs, St Kilda will debut with a home game against the GWS Giants at Moorabbin Oval, while the Gold Coast Suns and West Coast Eagles will not be required to travel for their debut games against the Brisbane Lions and Fremantle respectively.

The first edition of the women’s QClash would be played at Metricon Stadium, which would be the first time an AFL Women’s game has been played there since the 2017 grand final.

The Western Derby, on the other hand, would be played at Lathlain Park, the training ground of the Eagles’ men’s team, with the likelihood that Optus Stadium will be unavailable due to the cricket.

The other two matches will see foundation clubs Melbourne and the Western Bulldogs face off at Casey Fields on the Saturday; this will leave this year’s debutants, the Geelong Cats and North Melbourne, to face each other on the Sunday at Kardinia Park.

As far as television rights are concerned, the Seven Network will continue to televise two matches a round, while all the interstate clubs will be televised live into their respective markets.

Thus, here is what Round 1 of the 2020 AFL Women’s season should look like:

* denotes a match to be televised on Channel Seven.

Note: No match will be played in Melbourne in the Saturday evening timeslot so as to avoid a clash with the 2020 Australian Open women’s singles final.