The Wallabies have started their World Cup campaign with a win 39-21 over Fiji which looks comfortable on the scoreboard but has left Michael Cheika and his team with plenty of questions.

Australia were shaky early on in the match and went down by nine in the opening minutes of the second half, but a disciplined and patient final half-hour, highlighted by dominance in possession and territory – and the rolling maul and scrum – allowed Cheika’s men to leave the Sapporo Dome with a bonus-point win.

Fiji enjoyed a far better start to the game despite fumbling their way through the opening kick-off receipt. A penalty inside the first five minutes allowed Ben Volavola to pick up the first three points from the tee, before Peceli Yato broke down the right to cross for a try. 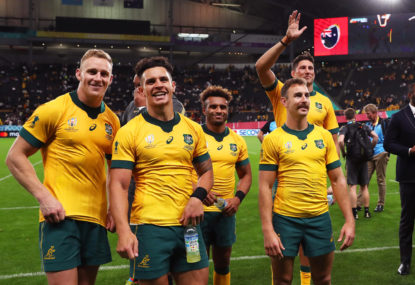 With Fiji’s big forwards dominating the contact zone and disrupting the Wallabies attack, captain Michael Hooper was able to get Australia on the board thanks to a superb effort to muscle his way over the line.

That had brought the game back to a one-point margin, but the Flying Fijians had the best of the action for the next fifteen minutes and extended their lead thanks to two more Volavola penalties.

The Wallabies finally put together some good phase play in the closing minutes of the half, and after turning down a chance for three points and opting to kick for touch, some patient build-up allowed Reece Hodge to cross in the corner for a deserved try.

The second half, though, started about as badly as possible, a botched midfield play from the Wallabies gift-wrapping a breakaway try for Waisea Nayacalevu next to the posts. Aftter Volavola’s ensuing conversion, Fiji led 21-12.

Australia started to control the game far better after conceding. Reece Hodge made easy work of a penalty from right in front, before a series of rolling mauls led to a pair of Tolu Latu tries interspersed by a yellow card to Levani Botia for repeated infringements.

That sin-binning was crucial, with Samu Kerevi adding a second five-pointer while Fiji were down a man to seal the game for Australia, while Marika Koroibete added one more try shortly after.

While there were some positive performances from the Wallabies – Hodge and Hooper were strong in the face of Fiji’s first-half onslaught, Kerevi provided a number of strong runs and Will Genia was excellent after replacing Nic White with half an hour to go – Cheika will be concerned by the way his side was outmuscled in the contact zone early.

A lack of accuracy from the tee, too, will be a worry. Christian Lealiifano, Matt To’omua and Hodge shared kicking duties and each missed an attempt – two of them relatively straightforward chances.

The six-try performance gives Australia a bonus-point win ahead of their massive clash against Wales next weekend, a match which will likely decide who progresses from Pool B in top spot – thus avoiding a likely quarter-final against England.