How the Giants can topple the Magpies

Despite the fact that the GWS Giants are without Toby Greene, Lachie Whitfield and Stephen Coniglio, the upcoming preliminary final is shaping up to be an enticing contest.

On the one hand, you have the Collingwood Magpies, who are looking to redeem themselves after their heartbreaking loss in last year’s grand final against West Coast. On the other, you have the Giants, who are attempting to make the grand final for the first time in their short existence.

This match could genuinely go down to the wire due to the class of both teams, though it seems highly unlikely that we’ll see a Giant upset.

However, if the Giants implement the following strategies, it will give them every chance to pull off a miracle.

Put Matt de Boer on Steele Sidebottom
Given Collingwood seem to be stacked with midfield talent such as Scott Pendlebury, Adam Treloar and Taylor Adams, Giant’s coach Leon Cameron could send his best tagger de Boer to any one of these players and still lose the match.

However, it’s telling that in the Magpies’ qualifying final win against the Geelong Cats that Sidebottom had 33 touches and a goal. He was arguably the difference in that match.

In last year’s grand final, West Coast’s tagger Mark Hutchings restricted Sidebottom to a mere 14 touches. This was arguably the reason that West Coast won the premiership. Given de Boer has tagged important players such as Lachie Neale, Marcus Bontempelli and Tim Kelly out of games this year, it’s safe to say that he can do the job on Sidebottom.

Use ruckmen Lachie Keefe and Shane Mumford to double-team Brodie Grundy
Let’s be realistic. Brodie Grundy will dominate the hit-outs against both of these ruckmen.

He’s simply on another level compared to the rest of the competition. However, the same could be said about Melbourne’s Max Gawn last year.

Yet, in the preliminary final between the Demons and the Eagles he was basically a non-factor due to the fact that Eagles’ ruck duo of Nathan Vardy and Scott Lycett limited his influence.

It might be a long shot, but Grundy’s ruck dominance has been so influential that the Giants have no choice but to try and nullify it in order to give themselves a chance to win.

Whatever happens, I think that this match will be an absolute cracker. 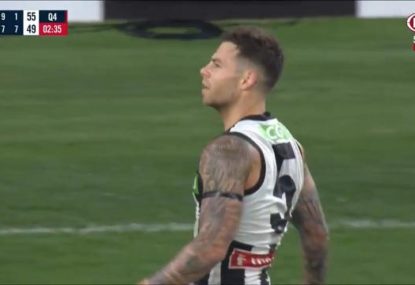 Overreaction following significant defeat or victory are common in sport, especially when your own team is involved.

Collingwood coach Nathan Buckley received front-row tickets to see the “West Coast Globetrotters” for his 48th birthday on Sunday – but the only problem was it was his side who copped the punishment.