The F1 paddock now zig-zags across the globe for the final seven races of the season. The first of these is Singapore, the toughest race on the calendar thanks to the sweltering cockpit temperatures and the technical nature of the Marina Bay Street Circuit.

Q1
Mercedes set the pace in the opening qualifying session, with Valtteri Bottas fastest and Lewis Hamilton in second. Bottas gained 1.306 seconds on his lap on the soft tyre compared to his first lap on the medium tyre.

George Russell and Robert Kubica will once again line up on the back row of the grid. While their Williams is still not as quick as its competitors, both Russell and Kubica did not help themselves as they both made errors on their final flying laps. In fact, Kubica didn’t even make it to the line to start another lap before the chequered flag.

Daniil Kvyat, Lance Stroll and Romain Grosjean were also knocked out of Q1.

Q2
Both Ferraris had clearly left something on the table in Q1 as they finished 1-2 in Q2 with Charles Leclerc and Sebastian Vettel trading fastest laps in the final few seconds of the session.

A clear gap emerged between McLaren and Renault, who were the best of the best of the rest, and the rest of the midfield. Sergio Perez in the Racing Point was closest to getting into Q3, missing out by just 0.040 seconds.

However, his five-place grid penalty due to a gearbox change after he made contact with the wall at turn 21 means he will drop back to 16th.

Q3
It was a Q3 of two halves for Sebastian Vettel. His first flying lap was stellar, managing to go 0.354 seconds faster than his teammate, Leclerc, and a whopping second quicker than the Mercedes. Vettel even made contact with the wall on the outside of turn 19!

However, on the second and final flying lap, Vettel got oversteer coming onto the Anderson Bridge, being very lucky not to go into the wall. He backed off and came into the pits.

“There was no point finishing the lap because I was so far behind,” Vettel told Paul di Resta.

With Vettel not able to defend his fastest lap, Charles Leclerc snatched pole position from him with Hamilton qualifying second. Vettel will start third tomorrow.

“I’m extremely happy about today,” said Leclerc. “The team has done an amazing job to bring the package we needed.”

“I don’t know where Ferrari picked up their pace today but they did a good job,” said Hamilton. “I gave it absolutely everything I had. It was as much as I could get out of the car.”

Tomorrow sees the longest race of the season as the drivers sweat their way through two gruelling hours of racing. Charles Leclerc looks for his third consecutive grand prix victory at a track that Ferrari were supposed to struggle on.

However, it will not be smooth sailing as Lewis Hamilton will be behind Leclerc every step of the way. Watch out for how Ferrari use Sebastian Vettel as he could come into play in terms of strategy, as Mercedes could do with Valtteri Bottas.

The answers will be revealed tonight from 10:10 pm AEST.

Formula One champion Lewis Hamilton has tested positive for the coronavirus and will miss this weekend’s Sakhir Grand Prix. 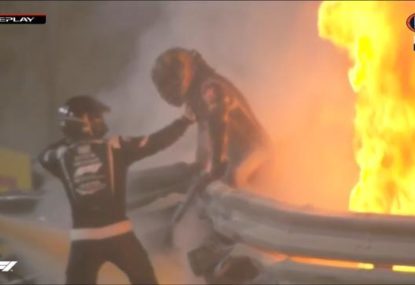