The Subiaco Lions have won their fifteenth WAFL premiership, their eight in sixteen years, their fourth in just six years, and two in a row, after comfortably doing away with the South Fremantle Bulldogs at Optus Oval on Sunday afternoon.

The Lions raced out to a handy advantage at quarter time with four goals to one, and never really looked troubled at any point during a match they ultimately won by 96 points.

One of Subiaco’s newest ex-AFL talents, former Sydney Swan Harrison Marsh, kicked the first goal of the game, but South Fremantle got a quick reply through Shaun Bewick.

Any sense of parity on the scoreboard ended quickly thereafter, however – Subiaco kicked the next three goals to close out the first quarter, coming through Clancy Wheeler, Ben Sokol and Ben Newton.

The Lions’ dominance continued in the second quarter, banging through five goals in quick succession while the Bulldogs could must just one behind for the quarter.

Sokol got his second for Subiaco, with Sandover Medallist Lachlan Delahunty, Simon Moore, Justin Joyce and Thomas Edwards-Baldwin the other goalkickers in this term. The Lions lead by 53 points at the main break.

Sokol would go on to kick two more in the third quarter, while Delahunty bagged his second and Kyal Horsley managed one for Subiaco as well.

Haiden Schloithe broke through for the Bulldog’s second goal of the game during that quarter, but the Dogs weren’t able to add anything more to it before the final change.

Marsh and Sokol kicked two more goals each in the final term, taking Marsh to three for the game and Sokol to six. The captain Leigh Kitchin also managed to pinch one for the Lions, while former Hawthorn rookie Kade Stewart had South Fremantle’s third.

The result will add fuel to a debate about equalisation in the WAFL after yet another dominant season from the Lions, who won last year’s grand final by 81 and have lost just one in the last two years.

They have already been installed as $1.15 favourites to win the premiership again in 2020.

The Subiaco Lions and South Fremantle Bulldogs will clash in the 2019 WAFL grand final. This is The Roar’s guide to live streaming the match online, or watching it on TV. 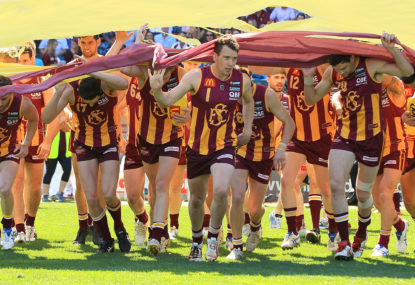