Compared to previous seasons, 2019 had been one of relative calm when it came to referee bashing and lamenting the demise of ‘rugby league as we know it’.

But after Melbourne did over Parramatta 32-0 on Saturday night, Phil Gould once again went off on one of his rants about the referees. Once again, it was fact-free opining on how to ‘get our game back’.

Usually Gould goes unchallenged when he launches into these ‘look at me’ moments, but this time he was actually asked by host Erin Molan if he would get involved and be part of fixing these supposedly horrible arrangements. Gould deflected then circled back to a weasel-like “someone will fix it one day, but in the meantime we’ve all got to put up with it”.

The heinous crime that so warranted another Gould rant? It’s predictable, I think you all already know. It was referees correctly applying the rules.

Rugby league has always had a serious problem with authority, which can be traced almost all the way back to the game’s origins. Whether it’s administrators, coaches, the judiciary, it doesn’t matter – everyone has a problem with anyone who with decision-making power.

But the code has a critical issue with its treatment of referees. Not just at the elite NRL level, but down through the grades and across all age levels. Referee bashing is hardly unique to rugby league but the way it is ingrained in the sport certainly is. It’s such a deep-seated cultural issue that is not likely to ever change.

You can’t win. You never will. And leading the charge against you will be the media.

As Friday’s Manly versus Souths semi final played out, journo after journo wailed and lamented online about the referees, who had the nerve to make a series of correct decisions.

The Daily Telegraph’s Dean Ritchie came out with the probably the saddest take of the weekend.

Refs absolutely destroying a great game.
This is an elimination final!!
What has happened to our once wonderful game?

It was a typically ignorant and crowd baiting contribution, representative of an NRL media who with very few exceptions spend their time running the game of rugby league into the ground.

For all the constant bullshit being pushed about the death of rugby league there is one thing that actually could send it to an early grave, and it’s the standard of media coverage.

The Storm and Eels final was broadcast live into Melbourne on Channel Nine. It doesn’t happen often (free-to-air Storm games are usually shown on 9Gem in Melbourne) and because it was a final there were 108,000 people watching, many more than for a usual club game.

The major NRL broadcasts into ‘neutral’ states are usually the State of Origin series and the finals. Week-to-week games on channels like 9Gem usually only attract a small but ardent band of watchers.

So it’s not a stretch to say that a lot of watchers in Melbourne would have been checking the game out for the first time or with a limited NRL knowledge base. And how is the game promoted to them by the major broadcaster?

Ref bashing, complaining and whinging about how horrible everything is and how Gus Gould just can’t stand it anymore.

It’s an appalling look for the game and does nothing to engage or attract a new fan of rugby league. Why would you watch another game if everything’s so horrid?

There needs to be a circuit breaker. But what can change? What should change? If I ran the NRL, Channel Nine would be zero chance of getting the rights again. I’d even consider buying out the last year of the current rights deal and getting them out of there now.

There are terabytes of data taken up with pieces about how poorly the rugby league media covers the NRL. We all lament the poor state of things and hit out against crisis merchants who seem to revel in sawing away at the tree branch they’re sitting on.

It’s popular to bag Gus and co, it’s popular to highlight how far Fox League has fallen from being an engaging, high quality rugby league news outlet to a monkey dung fight featuring these very same crisis merchants. Reputations are being damaged right before our eyes.

But are they? Have we got this all wrong?

You may remember back in 2015 esteemed cricket writer Geoff Lemon wrote a piece about the Channel Nine cricket commentary team which went viral all over the world and is still widely linked to even now.

Lemon wrote what a lot of cricket fans felt – the broadcast was too chummy, inane, not focused on the sport and giving the viewer a poor quality experience. Sound familiar?

I agreed with every word Lemon wrote, yet as the piece went wild I couldn’t shake a thought from my years of playing cricket and being around cricket clubs – this type of commentary was actually what the majority of viewers preferred. 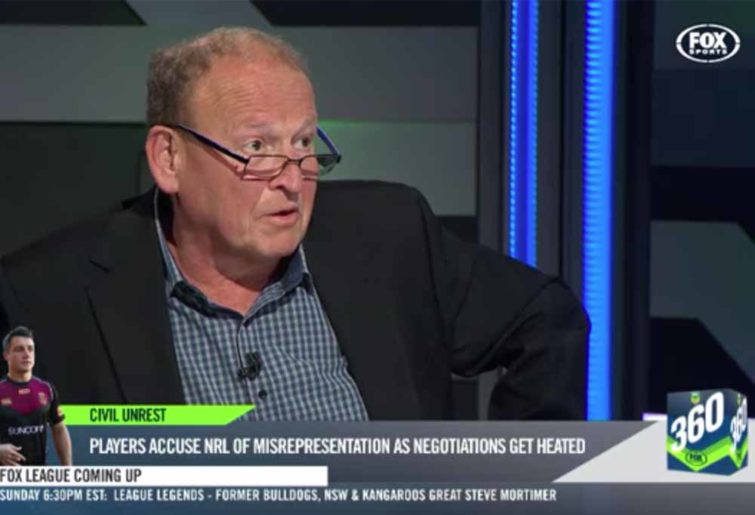 It may not have suited social media users or the cricket trainspotters, but that didn’t matter. Nine was aiming at the audience they knew was bigger, and giving them what they felt familiar with.

Indeed, when nine eventually lost the cricket rights, some of the very commentators Lemon took to pieces turned up on channel seven’s cricket coverage. Nothing changed other than the channel.

For all our anger about being served up clickbait articles and shouting matches over moronic takes, if the audience overwhelmingly wanted Fox League and Nine to cover rugby league differently it would happen. You only need to see the number of people supporting Gould’s rants to understand.

We play a part in this too – we validate rugby league’s horrible coverage by sharing and commenting on all these deliberately bad takes and emotive headlines. It makes us feel good, but it ticks the engagement boxes for the journo.

If I hate an article and comment on it saying so, as far as the analysis goes that means exactly the same as if I commented to say I love it. It’s all just about the clicks and the metrics.

So there are calls for better, for quality coverage, less referee blaming, less death riding the NRL, more actual focus on the game… But nothing is likely to change.

I sure don’t like it, but I’m resigned to the reality.

I have zero confidence that we’ll ever see anything better when it comes to rugby league. The game is so terrified of anything resembling change that I wouldn’t be surprised if the next TV rights deal is more the same.

I want rugby league to grow in Australia and beyond. To showcase how good it is to the world. To drag that casual viewer in with a sport that in incredible to watch and easy to pick up. I know I’m not alone in this thinking.

But more of the same keeps rugby league locked where it is, and unfortunately that suits a lot of people just fine.