Why the Wallabies are running for the exit

Hold your horses! The title of the article may get the alarm bells ringing with the World Cup underway, but it does not mean that Australia are already headed home from Japan.

Far from it. In reality, it points to one of the most improved features of the Wallabies’ play in 2019 – their ability to move the ball out from positions deep in their own end with poise and accuracy.

Two forward phases crushed from the kick-off, followed by an ill-advised floated pass by Kurtley Beale right on his goalline. Result: an easy interception, and seven points for the Springboks.

Ardent Wallaby supporters will have lost count of the number of blocked exit kicks have led to turnover scores for the opposition. I examined the most recent example in the final game of 2018 for Michael Cheika’s men, played at Twickenham against the old enemy.

From the opening kick-off in the game, Dane Haylett-Petty was given a horrible ball with which to try and find touch on the Australian left from midfield. Predictably, his kick was blocked down by Ben Youngs and England scored from the ensuing scrum.

It set a pattern which was repeated throughout the match, and fatally undermined Australia’s hopes of turning over England on their home patch. Will Genia missed Matt Toomua with a pass on the very next exit, and later in the second half another errant clearance from midfield was returned by big Joe Cokanasiga all the way to the Wallaby goalline. That list is by no means comprehensive.

By the end of 2018, Australia’s exit plays were doing little but funding a series of scoring opportunities for the opponent. Wind the clock forward nine months, and I am pleased to be able to announce that the picture has changed completely. Wallaby exits are now one of the strongest suits in the team’s collective hand.

The seeds of change were sown in Australia’s 47-26 demolition of the All Blacks in Perth.

In the 48th minute, Australia received a Kiwi kick-off in the formation with which we are familiar from my recent article. 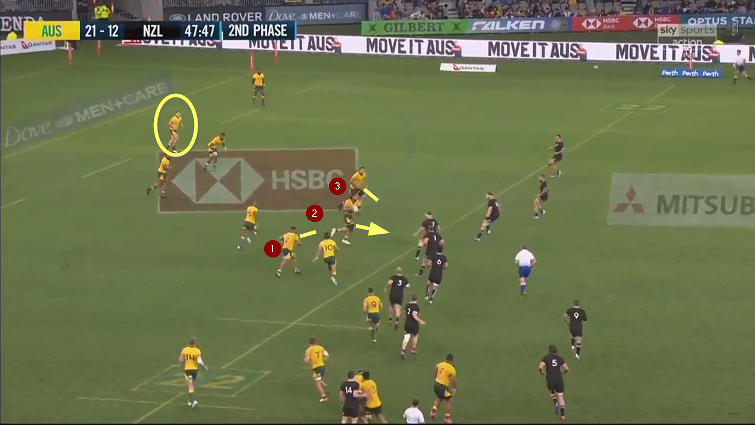 With the All Blacks down to 14 men after Scott Barrett’s red card, the pod of forwards based around Lukhan Salakaia-Loto has moved a bit wider to a position outside the number 10 Christian Lealiifano. Fullback Kurtley Beale is stationed behind the pod as a potential second receiver, with openside flanker Michael Hooper playing out wide with the backs.

Thirteen seconds later, scrumhalf Nic White was scoring a try in the left-hand corner. Six phases had been completed and 75 metres made. It was a seminal sequence of play.

The attacking momentum Australia have been achieving by keeping ball in hand after receiving kick-offs in their own 22 is prodigious. Let’s look at the relevant stats from their opening World Cup game against Fiji:

Australia kept the ball for just under five minutes, built 33 per cent of their total rucks, and made 37 per cent of their total metres from five Fiji kick-offs which they received deep in their own 22. To put that in perspective, the Wallabies were able to build three quarters of the rucks Fiji created in the entire game just from play started from kick-off receipts.

As the stats indicate, Australia have been very successful by keeping ball in hand and extending the play well beyond their own 22. They have used the kick as a variation, and by and large have been kicking from positions much further upfield.

Why take the apparent risk of keeping ball in hand for longer periods in your own end? Because the risk is not as severe as it appears to be.

Most defensive teams will maintain at least three players in the backfield in these situations, which means there is more space in between defenders at the line and outside the last man on the edge.

All of the Wallabies’ first five exits against Fiji had positive outcomes. They won one penalty, made two kicks to touch at halfway or beyond, and built two long phase strings of a dozen rucks or more, taking ball deep into the opposition 22.

Fiji kicked off uniformly towards Michael Hooper on the Australian right, and the skipper then set up the attacking picture we have seen before: 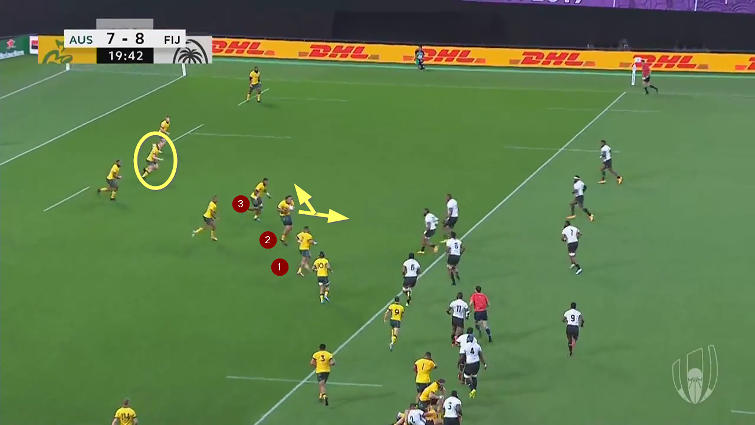 In this instance – and without Salakaia-Loto in the starting line-up – Rory Arnold has slotted into the middle of the forward pod outside Lealiifano, with the usual suspects beyond him: Beale for the ball delivered out the back, David Pocock to assist with support and cleanout work in the wider areas:

Isi Naisarani is an important option for the tip-on pass, then he shifts over to become the main runner whenever the ball comes back to the middle of the field on subsequent phases. Probably Australia’s best cleanout forward, Arnold, does the honours at two successive rucks to secure possession.

As in the try against the All Blacks, Australia’s main effort after the ball has been brought outside the 22 is directed at exhausting the open or backs side of the field:

Nic White first peeks at the Fijian inside defence to fix it with the short ball threat of Naisarani, then spreads the ball wider towards Samu Kerevi and James O’Connor in the 15-5 metre zone.

Again – in another repeat from the sequence at the game in Perth – left winger Marika Koroibete is frequently used to gain ground up the middle on the pick and go:

One quick pick play by Koroibete, another short same-way side probe by White, Kerevi and O’Connor, and the Wallabies are suddenly all the way up to the opposition 22 without having had to take any obvious risks.

Later in the second period, Australia were able to exploit the lower numbers on the Fijian upfield defensive line more directly:

Firstly, they link their main two distributors together (Matt To’omua and Beale), then O’Connor again shows excellent judgement outside them to let the pass go through to Australia’s own ‘flying Fijian’ down the left sideline.

With Fiji obliged to defend such a large backfield space near the Australian 22, there is bound to be ample space to exploit on the edge: 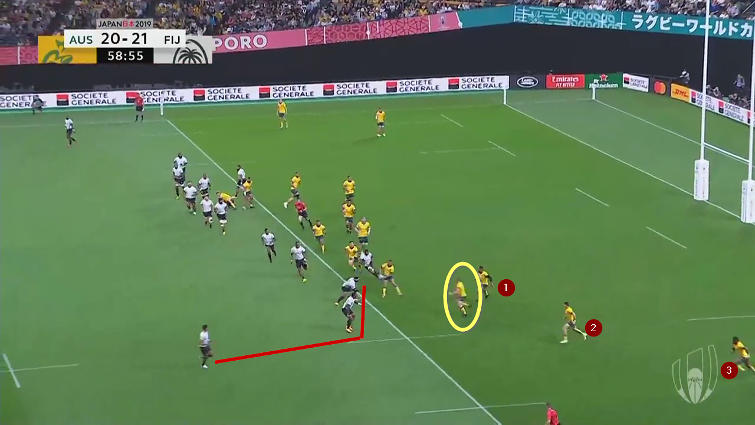 The threat of Australia’s ability to move out of their own 22 with ball in hand created all of the room the Wallabies needed to implement a more effective kicking game than was evident at the end of 2018:

In the first instance, White finds touch near halfway after the initial drive phase by the forward pod and there is no threat of a block-down; in the second the ball has been moved all the way across the field and back again through seven phases before replacement halfback Will Genia spots the opportunity for a huge touch-finder close to the Fijian 22.

It was all a far cry from the Nelson Mandela Stadium in Port Elizabeth in the Rugby Championship or Twickenham in West London at the nadir of an annus horribilis for Michael Cheika.

Summary
In soccer, there is a phrase that ‘you build from the back’. With the vast improvement in the quality of football pitches and the back-pass rule for goalkeepers, high-profile coaches like Pep Guardiola insist the best way to build an attack is to pass out short from your keeper and defenders.

They drop an extra midfielder into defence – this was typically Sergio Busquets in Guardiola’s great Barcelona sides – to give an advantage in numbers, then play out patiently in the La Salida Lavolpiana method originated by Argentian coach Ricardo La Volpe.

At the World Cup, the Wallabies are translating this method for rugby consumers. They are playing out from opposition kick-offs with ball in hand in an exit strategy that is eminently well-suited to the Australian rugby psyche.

They have ball-carriers, support and cleanout players shrewdly posted across the width of the pitch and they know they will probably enjoy an advantage in numbers, with the defence obliged to cover both the depth and the width of the field.

They are particularly dangerous when the ball is worked out towards their left wing, as the All Blacks found out in Perth and the Fijians discovered in Sapporo, and they can use the passing game to set up their kicks off the scrumhalf with little or no pressure upon them.

It may not be enough to win them the World Cup this year, but it is at the least providing a platform for attack, and producing results that ‘Pep’ would applaud in another, very different sport.