Joe Burns is flourishing in the middle order

Joe Burns is pressing his case as a middle-order option in ODIs, while Will Sutherland and Riley Meredith are showing huge promise. These are three talking points to come out of the ongoing Marsh Cup.

Joe Burns has become a quality middle-order batsman
In recent years, Australia have had a glut of top-order options in ODIs but have consistently been let down by their middle order. They have at times played batting line-ups with four regular openers in the team, followed by inconsistent all-rounders Marcus Stoinis and Glenn Maxwell.

All too often they have lacked balance in their top six. This has been largely due to the absence of a specialist middle-order batsman who can adapt to a variety of conditions and match situations – a player who is adept against pace or spin, and comfortable either recovering from a collapse or pressing home an advantage.

Another batsman who looms as a fine option in the middle order is former Test opener Joe Burns. The Queenslander is pigeon-holed as a top-order player in the longest format of the game but, early in his domestic career, spent a lot of time in the middle order in all formats.

While Burns has opened in all six of his ODIs, he has recently done well in the middle order in the BBL and also in the domestic one-dayers. Since Burns was moved permanently to number five late in the 2017-18 domestic one-day cup, he has piled up 446 runs at 74 in that position.

His experience at the top of the order helps him to bat with confidence against pace while he’s also fluent versus spin, using his feet nicely and proficient on the sweep.

Handscomb and Turner deserve to be ahead of Burns in the ODI pecking order right now. But he is building a strong case to be considered as a fix for Australia’s long-term middle order woes. 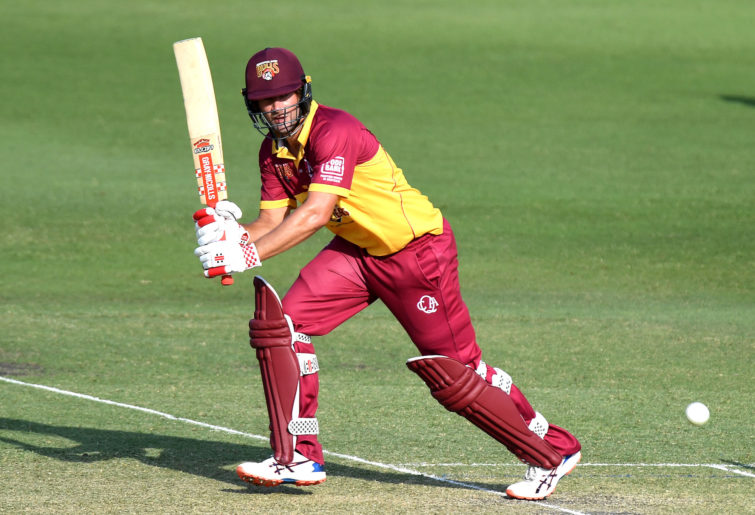 Joe Burns has impressed in the middle order during the Marsh Cup. (Photo by Bradley Kanaris/Getty Images)

Will Sutherland has more than just talent
Sutherland had a nightmare start to this competition. Against WA he conceded 102 from his ten overs as he was monstered by Marcus Stoinis before then being dismissed second ball. It was the kind of match that could shake the confidence of an accomplished veteran, let alone a 19-year-old rookie.

Yet Sutherland bounced back immediately and with vigour. Against Tasmania, Victoria were in a deep hole at 6-109 when the bowling all-rounder came out to bat. He showcased a wide range of strokes in cracking 53 and lifting Victoria to a total which proved to be beyond Tasmania. The towering quick then bowled with good pace, sharp lift and encouraging accuracy as he took 2-43 including the giant wicket of George Bailey.

The talent of Sutherland is obvious. He has made a fantastic start to his List A career, with 16 wickets at 23, and also has generous ability with the bat. What he showed against Tasmania was that he also possesses impressive resilience. Sutherland shapes as a fantastic prospect for Australia in all three forms of the game in the years ahead.

Maybe Warnie is right about Riley Meredith
Shane Warne loves a left-field selection. Since he famously talked up Michael Beer, who then made a shock Ashes debut, the former Australian star has made a habit of calling for random domestic cricketers to get international caps.

His pet player last summer was Tasmanian express quick Riley Meredith. After watching Meredith bowling heat in the BBL, Warne wanted him immediately included in Australia’s ODI squad. That prompted Meredith’s Hobart and Tasmanian coach, Adam Griffiths, to try to calm things down, saying the paceman was not yet ready for international cricket.

Eight months on from that surge of hype, 23-year-old Meredith looks an improved bowler. His strength remains his ability to operate at a consistently hurrying pace – he was repeatedly clocked at or near 150 kilometres an hour in last summer’s BBL. That speed has also been used against him. Quite often earlier in his career he proved expensive in all three formats.

So far in this Marsh Cup, Meredith has displayed greater precision as well as a more effective change of pace. He’s taken five wickets at 15 in his first two matches while giving up just 3.75 runs per over. Tasmania are deploying him at first change and using his searing short ball as a weapon in the middle overs.

Yesterday WA looked headed for another mammoth score, at 1-133 with tons of batting to come. Then Meredith cut through their middle order with bouncers. He used his short ball to dismiss key players Shaun Marsh, Mitch Marsh, Ashton Turner and Marcus Stoinis to finish with 4-42. Meredith is far from the finished article but he has some exciting attributes.