It’s been a memorable season, but there’s just one game in the AFL left to tip this year. Given a 1600-word article is absurdly self-indulgent for just one match, we’re doing a bit more this time by picking a winner, margin, Norm Smith medallist and first goal-scorer.

Whether these extra tips count for points or not will depend entirely on whether mine end up being correct.

In reality, Marnie Cohen will finish her first season on our expert tipping panel as the winner; congratulations to her.

Last week, everyone bar myself scored one point thanks to Richmond’s win over Geelong. I scored a ‘perfect’ two after correctly picking GWS to upset the Pies.

I hope you’ve enjoyed reading our tips this season as much as we’ve enjoyed putting these pieces together. Until 2020, see you later!

I was not bullish at all on GWS heading into September, tipping against them against both the Bulldogs and Lions – but they’ve won me over.

Yes, they were a straight kick away from getting knocked out two weeks in a row and, yes, Stephen Coniglio won’t play in this one after all.

But I believe they’ve still got the personnel and the gameplan to take it to the Tigers and leave the MCG with a historic first premiership.

I mentioned last week that Geelong had the ability to play the game that beats Richmond in the preliminary final and they did it – for the first half.

Jeremy Cameron has proved far too hot to handle for Dylan Grimes, David Astbury or Nick Vlastuin in 2019. He’s had 19 scoring shots in just two games, kicking 7.5 in the Round 3 win and 3.4 in the Round 17 loss. Jeremy Finalyson didn’t play in the latter of those matches.

If Jacob Hopper, Tim Taranto and Josh Kelly can own the clearances – very doable against the Tigers – and the Giants play patient, controlled football on the outside, I reckon they’ve got the dynamism up forward (especially with Toby Greene returning) to pull the Richmond back six out of alignment and put up a winning score.

It wouldn’t surprise me if Richmond won convincingly; if GWS try to win on the back of absorbing absurd numbers of inside 50s late like they’ve done against Port Adelaide, Sydney, Brisbane and Collingwood in the second half of 2019, they’ll get blown off the park.

But I’m backing the underdogs to play slow, take the crowd out of it and eventually push out to a winning margin.

The other, far more solid reason I’m backing the Giants is because of a baseball game I attended in Japan earlier this year. The Yomiuri Giants (who wear black and orange, close enough) blew the Hanshin Tigers (who share Richmond’s colour scheme) out of the water early on route to a convincing 9-3 victory. If that’s not the universe screaming a tip to me, I don’t know what is.

Anyway, as far as the Norm Smith goes, I’m backing Hopper to put in a monstrous effort in the middle of the park and be rewarded for his efforts. Harry Himmelberg will kick the first goal, much deeper into the first quarter than we expect.

The entire season AFL season has been built to this final Saturday in September and I reckon we’re in for a treat.

Both Richmond and the Giants have played sensational footy this final series and the grand final should be no exception. Richmond will start favourites and rightly so. They are white-hot at the moment and, in front of a roaring home crowd, it seems likely they’ll win a second premiership in three seasons.

The Giants, however, are building to something special and the emotion that spilled over from players (particularly Toby Greene) on the sidelines during the preliminary final will no doubt provide some extra motivation.

What last Saturday did show to the AFL world is that the Giants are no plastic, all heart. They overcame their biggest hurdle, the MCG, and they could go one step further on the weekend.

For the most part, it’ll be tight but, similar to last week, I can see Richmond pulling away by a couple of goals towards the final siren.

It should be a cracking game with both sides at their best, but there can only be one winner and I’m on the Tiger train. 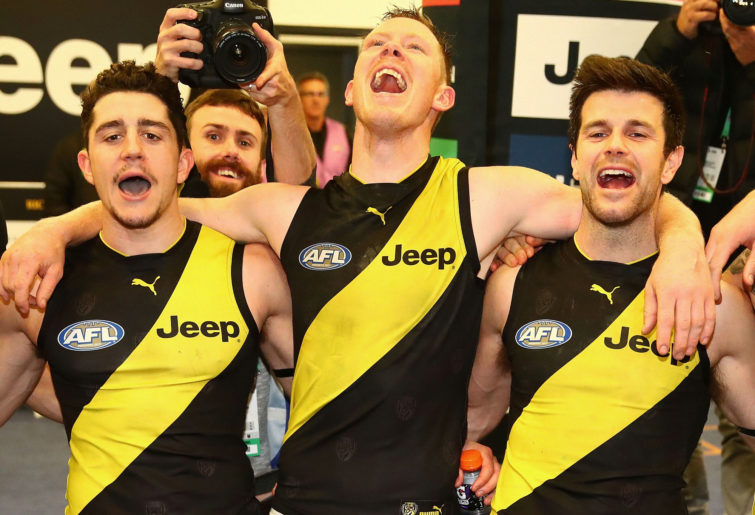 Can Richmond win the flag in their home colours this time? (Photo by Scott Barbour/Getty Images)

I should be tipping Houli to win his second Norm Smith in three years. His performance in the 2017 grand final and his overall consistency from week to week makes me believe he can deliver on the big stage again.

I expect the game to be tight with plenty of back and forth, which will allow Houli to impact the game both in defence and pushing up the ground.

He’s an experienced head and an exceptional decision-maker, which is ideal for Richmond in a chaotic environment. He’s a much-loved figure at Tigerland and a Norm Smith would be a fitting end to his year.

Greene will be the x-factor for the Giants on Saturday afternoon and you feel as though the grand final is the stage Toby will thrive upon. He’s got to get the first goal for mine, especially as he’ll be desperate to perform after missing last week.

The Giants are capable of matching it with the Tigers this Saturday, and I think they will for a good portion of the grand final. They’re a strong marking side – both down back and up front – and will win most of the ball around the coalface, plus the returns of Lachie Whitfield and Toby Greene add two of the competition’s elite players to a preliminary final-winning side.

For all that, Richmond are deserved favourites. At their best, no team in the comp can run with them, and they play the MCG far better than GWS. Tom Lynch’s form is ominous, too, particularly considering the injury cloud hovering over Phil Davis.

I’d also argue that the Tigers’ poor performance this finals has already happened, last week against Geelong. Damien Hardwick’s side were comfortably outplayed for the first half of that prelim, yet still managed a three-goal win. They’ll improve this week.

I’m expecting the Giants to start this game well and with some controlled ball movement. Unlike the Cats last Friday, the men from western Sydney have the forwards to properly capitalise on that.

The Tigers will go on a few of their trademark bursts, GWS will close out the third quarter with a narrow lead, then Richmond will come home in the fourth quarter to seal a second premiership in three years.

Richmond weathered 2019 losing Alex Rance to injury and, while they were by no means terrible or close to it, the Tigers headed into the bye with a 7-6 record – hardly promising for a side tipped to do big things.

Since then, though, they’ve managed eleven straight wins – including comfortable victories in two finals against Brisbane and Geelong to launch themselves into favouritism.

GWS, too, has had a rough year with injury and headed into finals in sixth place and as underdogs in their clash with the Bulldogs.

But they dominated that clash and continued winning as the underdog, securing nail-biting, under-a-goal wins against Brisbane and Collingwood.

Once again, they’re the underdogs heading into their first-ever grand final.

There appear to be two schools of thought headed into this one: either Richmond winning comfortably, or GWS keeping it close and the game going either way at the end.

I’m leaning towards the latter. The returns of Lachie Whitfield and Toby Greene will bolster the squad and the Giants are adorned with the league’s best defensive unit – a unit that’ll have its hands full with the stellar attacking prowess of the Tigers.

Dustin Martin and the Tigers are in the box seat for a second flag in three years. (Adam Trafford/AFL Media/Getty Images)

Jeremy Cameron and co. aren’t too shabby either, so both teams will have periods controlling the scoring.

In the midfield, Whitfield’s return will no doubt aide the Giants against the mercurial Dustin Martin.

The Norm Smith tip is difficult, but expect either Bachar Houli or, in a left-field choice, Tim Taranto to get the best-on-field award, depending on which of the team salutes victory.

For my first goal kicker tip, I’ll again go a little left-field and back the Giants – through Jeremy Finlayson – to get on the board early on.

I predicted the Giants will keep it close – but I’m not backing the underdogs to win this one. Richmond, in a grand final, are a mammoth challenge – and I’ll back the Tigers to edge the win in a heartbreaker.