Whatever happens over the next two weeks, we're probably going to see an NRL drought broken

The past decade has been arguably the closest in the entire 112-year history of top-level rugby league in Australia.

All 16 teams have appeared in at least two finals series while ten have made their way to the grand final. Seven different teams have won a premiership.

And with the NRL grand final for 2019 only a few weeks away, focus is solely on who will reach the last day of the season. One thing that is assured thanks to the first week of the finals, we won’t have a repeat of last year’s decider, with Canberra now a chance of advancing to their first grand final since their last premiership back in 1994.

Looking at the last decade of football (2010-19), all nine of the premiership-winning teams ended the regular season in the top three on the ladder. On eight of those occasions, the premiers were undefeated in the finals, winning in Week 1, earning a week off and then winning their preliminary and then grand finals.

The last time a team from outside the top three won the grand final was Melbourne’s non-cap compliant side of 2009. The last time prior to that was the Wests Tigers in 2005, who won from fourth place.

One thing that has only happened five times, and not once since the ’05 Tigers, is a premiership side winning four finals matches.

Recent history tells us loud and clear that you can only win a maximum of three finals games in any one campaign, even if you have an illegally constructed squad.

These stats alone state loud and clear that this is a race between Melbourne, Sydney and Souths.

Given that eight of the last nine premiers all had a win in Week 1 and Week 2 off, recent history suggests that Melbourne and Souths have very slim chances of winning the title, leaving just the Roosters, who would claim the first back-to-back title wins since Brisbane in either 1992-93 (when the competition was unified, or 1997-98, when they won the Super League title and the first premiership under the unified NRL competition).

Week 1 of the finals has seen every team bar the Warriors record a win since 2010. Penrith’s 80 per cent success rate in Week 1 is the highest, followed by Canberra’s three-quarter clip.

Prior to last Saturday’s win over the Eels, the Melbourne Storm were one of five teams who hadn’t tasted victory in Week 2. Their previous win in the second week came in 2008, with 1999 the last time they did it when cap compliant.

Parramatta still don’t have a recent Week 2 win, and the same goes for the Panthers and Dragons. The Titans haven’t been seen in semi-final week since their 27-2 loss to the Eels in 2009.

It was that win by the Jarryd Hayne-led side against Gold Coast which saw Parramatta make their last preliminary finals appearance. They are the only side that hasn’t appeared in a Week 3 finals game since 2010, while the Raiders, Titans, Knights, Eels, Panthers and Tigers have only tasted failure in the grand final qualifier in that time.

Melbourne have won more Week 3 finals than any other side, with four victories at an impressive 66.67 per cent. The Roosters, like Melbourne, have made six of a possible nine prelims 3, however they’ve won half their matches.

Then we get to the grand final. Souths, Dragons and Cronulla all won their sole appearance in the biggest match of the year, while the Roosters have won two of their three over the decade. Melbourne have won premierships in half of their four appearances.

Since 2010, 15 of the 18 grand finalists all won in Week 1. Twelve of the 18 teams to make it to the decider also received the second week off after winning their opening final.

Statistically, we can conclude that this year’s grand final will be between Canberra and the Roosters.

While a lot of these figures suggest the Roosters will go on to win, it’s worth noting the power of the drought-breaker.

St George Illawarra handed the joint venture club their first premiership in 2010, the first for St George or Illawarra since the Dragons won back in 1979.

In 2014, Souths won their first title since 1971, while North Queensland and Cronulla won their maiden titles the following two years.

The Raiders are the only club still standing with a long premiership drought, their last title coming in 1994.

So come October, the statistics and recent history suggest that we could see a premiership drought of some kind broken.

It could also mean Cooper Cronk has the chance to win three titles in consecutive seasons for the first time since a swag of Parramatta players achieved the feat in 1981, 1982 and 1983.

'It could have cost us': Ricky Stuart's frustration at Bunker's tip-offs

The Raiders coach was unimpressed at two calls in particular, where the Bunker seemed to change the opinion of the on-field referee. 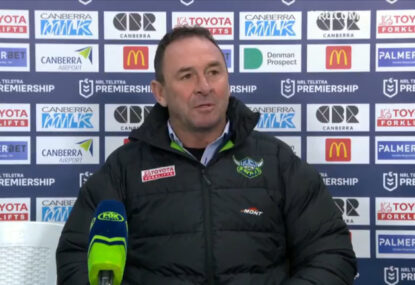 'It could have cost us': Ricky Stuart's frustration at Bunker's tip-offs

It was a case of so close and yet so far for Newcastle, who thought they had pulled off the upset! 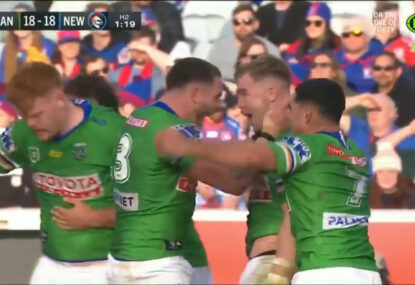 Elliott Whitehead sin-binned for a late hit on Kalyn Ponga

The Knights fullback was already battling illness, but bounced back after the hit to set up a try on the very next set. 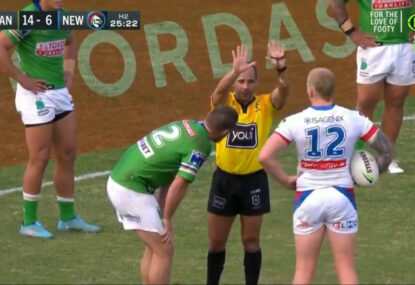 Elliott Whitehead sin-binned for a late hit on Kalyn Ponga

The big Newcastle forward just got his head in the wrong place, and was immediately in trouble. 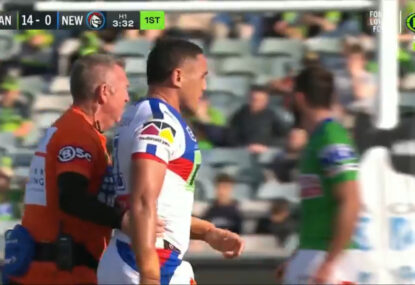 WATCH: Knights get a lucky break as goal post pads help Kalyn Ponga save a try

Several Raiders players were leading the chase before it hit the padding and took a fortunate bounce for the Newcastle fullback. 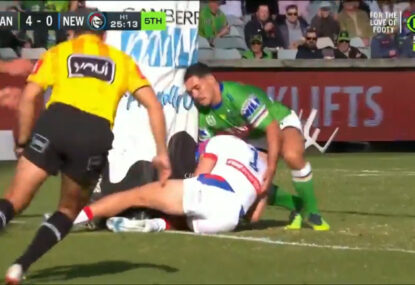 WATCH: Knights get a lucky break as goal post pads help Kalyn Ponga save a try