The Richmond Tigers are premiers for the second time in three years, and Marlion Pickett has written himself into AFL folklore. Here’s my talking points from the 2019 AFL grand final.

Murder at the MCG
What other way you can describe a contest that was, after a nervous start where we didn’t see the opening goal kicked until 20 minutes of play had passed, almost entirely one-sided?

I’ll out myself by admitting I fancied the Giants in this match, as written earlier today (yes, feel free to shame me in the comments). One of the reasons why was that GWS are such a good team when it comes to the clearances and winning the ball, an area where Richmond sometime struggle.

You wouldn’t know that from watching this match. Richmond came out +3 in clearances, +19 in contested possessions and +7 in contested marks. Impressive though those numbers may be, they still belie the degree to which Richmond simply dominated the game.

Richmond had won the clearances in just four 2019 matches before today. This game was the fifth.

In doing so, they held GWS to the club’s lowest ever score in an AFL match, and the second-lowest score ever recorded by any team in a VFL/AFL grand final.

Shades of Freo 2013 for the Giants
As far back as 24 hours ago I felt a strange, and as it turned out entirely unfounded, confidence that GWS could get up today.

It all turned to water as they walked out onto the ground in their predominantly white clash guernseys. A travesty – I was instantly reminded of Fremantle’s 2013 grand final against Hawthorn. It wouldn’t be the last time.

Like the Dockers in that fateful match, GWS were playing in their first grand final and clearly started the game with a few jitters.

Both teams had more than enough chances early in the match that, had they taken them, they could have settled their nerves andgotproperly into the match. But, like Nat Fyfe’s haunting misses of that year, GWS let too many good chances slip.

What kind of impact will this result have on the psyche of the club for the long term? The Giants were blown away in the most demoralising way possible – it’s a complex process to build themselves back up from here.

Debuting Marlion Pickett was the right call
As soon as Marlion Pickett picked up his premiership and best on ground medals in the VFL grand final, we launched into barracking for the yarn and hoping this mid-season draftee could somehow get his first crack at AFL footy in the ultimate match.

With Jack Graham ruled out after dislocating his shoulder in the prelim final – one of many hard-luck stories for the Tigers in 2019 – there was just a sniff of a chance there. Still, it seemed most likely the gig would go to Jack Ross.

Damien Hardwick and his coaching staff made the unexpected but so exciting decision to give Pickett a crack and he paid them back in spades.

He announced himself in the second with a beautiful spin that evaded multiple opponents and set up Jason Castagna. Castagna didn’t kick the goal – in fact he went on to kick 0.5 for the day – but Pickett had announced himself.

Then came the moment that will define this grand final. In the third quarter, with the match pretty much already one, Dustin Martin had yet another goal in his sights, but instead spotted Pickett and gave him the set up kick.

Pickett, as he’d been all day, was calm and classy under pressure. If the MCG had a roof, it would’ve been blown off.

From state footy in May to AFL premiership on debut in September. We might never see a footy story this good again. 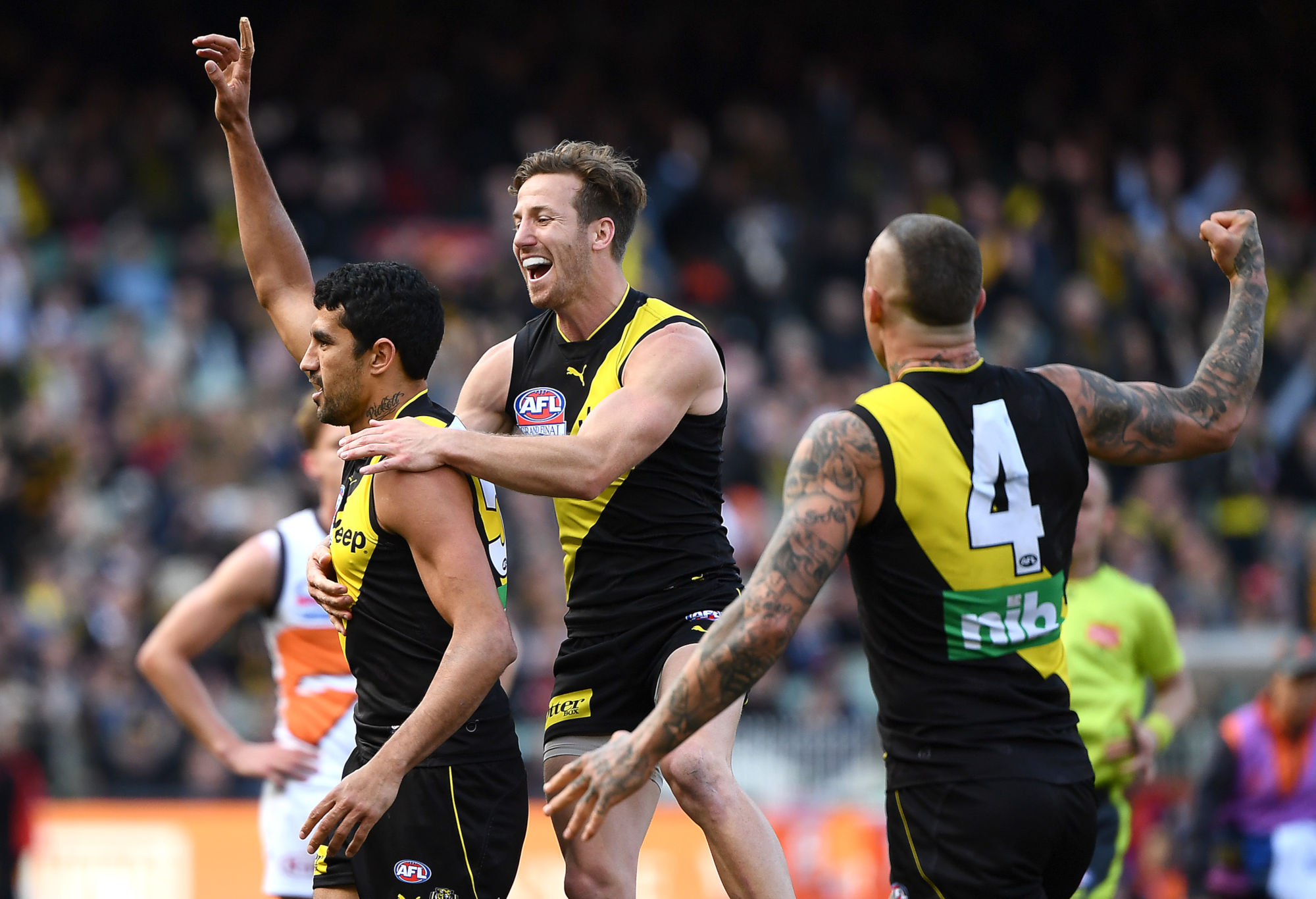 But Phil Davis wasn’t
Marlion aside, probably the biggest selection headache of the week was whether or not GWS captain Phil Davis should line up for his side, having been battered and bruised in the prelim versus Collingwood.

Right up until the siren there seemed to be speculation that Davis could still be a late out, but despite having to prove his fitness right up until the last minute, he still took to the field.

History will remember it as the wrong decision. Davis lined up on Jack Riewoldt but never looked able to keep pace with him. They kept it to a stalemate in the first term, but Jack booted three in the second term to take the game away from GWS.

Riewoldt would go on to kick two more and become the first man in eleven years to kick five goals in an AFL grand final.

Who knows what the Giants could have done, or whether it would’ve changed the result – but unfortunately for Davis, the 2019 decider proved a mare, perhaps moreso for him than any of his 21 teammates.

Dusty’s legacy grows bigger
The question of who should win the Norm Smith Medal was very much alive until the final quarter, with eventual winner Dustin Martin just one of a handful of players who had shone brightly throughout the day.

Dion Prestia, a popular pre-match pick, was a standout early and could well have been a deserving winner. Bachar Houli, who many felt was a contender two years ago, was there and abouts again this year.

Even Pickett deserved some attention – he picked up 22 touches and a goal, not overwhelming numbers but pretty good, and the narrative was appealing.

However Martin, already holding three goals to his name, took it away from all of them by slamming home a fourth in the 25th minute of the final quarter, to go with 22 touches.

Brownlow Medallist, two-time premiership player, two-time Norm Smith Medallist. Discounting his horror night in last year’s prelim, have we ever seen someone so consistently dominant in September? What a legacy.

Roarers, thank you for joining us throught the year for The Roar’s coverage of the 2019 AFL season. From me personally, and from all of us on the team, it has been our very good pleasure to bring you all the biggest stories from six magnificent months of football.

We hope you’ve enjoyed it just as much as we did – and our congratulations go out to your 2019 premiers, the Richmond Tigers.