The NRL have unveiled the nominees for award categories ahead of Wednesday night’s Dally M Medal ceremony in Sydney.

Leading try scorer Maika Sivo is a glaring omission after the NRL unveiled the nominees for their award categories ahead of Wednesday night’s Dally M Medal ceremony in Sydney.

Parramatta powerhouse Sivo was a key factor behind the Eels’ remarkable rise from 2018 wooden spooners to 2019 semi-finalists, scoring a league leading 22 tries for the season.

Yet the Eels X-factor didn’t get a nod when the category nominees were confirmed by the NRL ahead of the Dally M Medal night, surprisingly failing to feature as a Winger of the Year finalist.

Instead his teammate Blake Ferguson made the list along with the Sydney Roosters’ Daniel Tupou, Melbourne’s Josh Addo-Carr, the Warriors’ Ken Maumalo and surprise candidate Edrick Lee of Newcastle.

The bookies’ favourite for the Dally M Medal, Roosters No.1 James Tedesco, heads the nominees for Fullback of the Year along with reigning champion Roger Tuivasa-Sheck of the Warriors, Canberra surprise packet Charnze Nicoll-Klokstad, Parramatta’s Clint Gutherson and Melbourne’s Jahrome Hughes, who finished the season as Storm halfback.

Tedesco is tipped to claim his maiden Dally M Medal on Wednesday night before the Roosters aim to become the first team to win back-to-back titles since Brisbane in 1992-93 when they line up against the Raiders in Sunday’s decider.

Tedesco’s Tri-Colours teammate Cooper Cronk failed to get a mention in the Halfback of the Year nominees in his last season with the NRL instead opting for South Sydney’s Adam Reynolds, Cronulla’s Chad Townsend, Manly’s Cherry-Evans, Parramatta’s Mitchell Moses and Newcastle’s Mitchell Pearce.

Unlike Cronk, retiring Wests Tigers No.9 Robbie Farah did get a nod before he bowed out after being nominated for Hooker of the Year but Canberra’s Hodgson may be hard to beat.

Farah’s Tigers teammate Ryan Matterson – who has been given permission to negotiate with rival clubs – is among the five nominees for Second-rower of the Year, but the only Australian.

If the NRL is to be divided into two conferences for the rest of this season, the Rabbitohs, Roosters and Eels have to be in the regional conference. 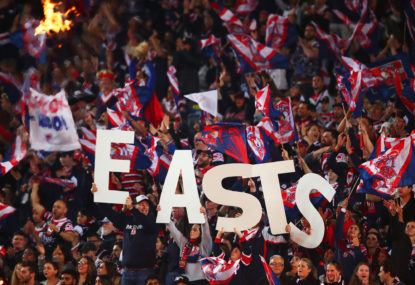