What could possibly be said about the Tigers – who took all before them to emphatically win the 2019 grand final – that hasn’t already been said?

Record memberships, the ability to fill the MCG with their own supporters, loads of money, a top administration, a champion coach surrounded by a group of quality assistants and a galaxy of superstar footballers tends to suggest that we are about to witness a dynasty that really started in 2017 with the slight hiccup of a preliminary final loss to Collingwood in 2018.

Those who follow my articles will realise that I consider a key ingredient of this success the ability to draft, train and develop players who will remain at the club long enough to become elite players by becoming members of the top 100 game-players or goal-scorers of all time.

Longevity at the one club creates loyalty, familiarity, respect, love and a common bond to be winning to make sacrifices to achieve personal and team goals.

This was shown this year when top 50 game player Shaun Grigg retired early in the season to create an opportunity for the Tigers to pick up Marlion Pickett in the mid-season draft, and the rest is history. 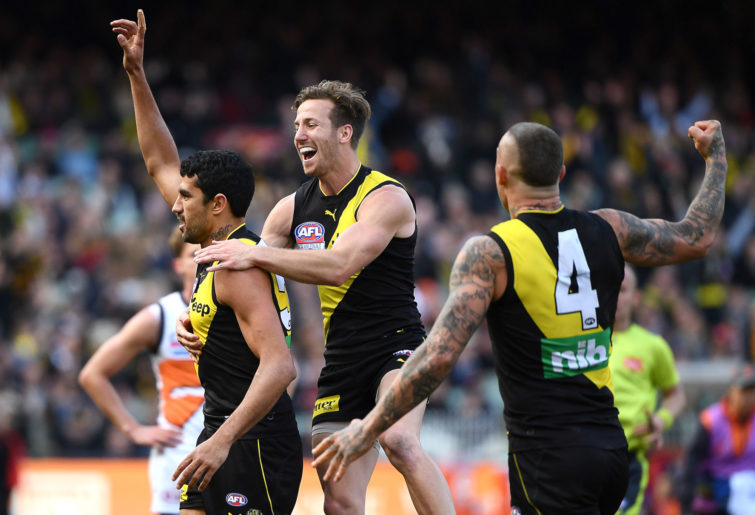 If Grigg hadn’t retired, he would have been one of 11 current players on Richmond’s list who have played sufficient games for the club to be ranked in this elite group, and – amongst the clubs that were is existence in the first half of last century – this 50 per cent representation in the club’s best 22 players is unprecedented.

It’s not just the number of elite players but also the positions on the list they hold and the records of the champions they have matched or passed.

Jack Riewoldt played his 250th game in Round 1, and despite missing a number of games during the season, he played enough to move past AFL icon Kevin Sheedy and into 13th position.

Inspirational skipper Trent Cotchin drew level in the grand final with Mark Lee and joined Riewoldt and Edwards in the top 20 game-players of all time at the Tigers.

The list goes on: Norm Smith medallist Dustin Martin matched the games tally of ‘The Ghost’ Jim Jess. Alex Rance played only one game – his 200th – and stands level with former champion goal-kicker Michael Roach, making him the fifth current player inside Richmond’s top 30 of all time.

Dylan Grimes played his 150th game in the grand final and matched another captain, Neville Crowe. Nick Vlastuin joined war veteran Bill Morris on 140 games and David Astbury – who took ten to make the elite list – finished the year inside the top 90 game-players of all time.

No new top 100 game-players are likely to be added to the list in 2020, unless Kane Lambert can play all 26 weeks of the season, but the odds are very short on Tom Lynch becoming a top 100 goal-scorer at the Tigers.

Although not one of the foundation members of the VFL, the Tigers have a long history of 122 years of competition in the league and won their first premiership 13 years after joining the VFL in 1908. Apart from a 37-year drought between 1980 and 2017, the club has generally been successful and can rightly […]