I'll be there when Canberra break their drought

Twenty-five years. I was 11 the last time the Canberra Raiders made the grand final.

Growing up in Goulburn, the Raiders were always my team. Gary Belcher was my first favourite player and when he retired I latched on to Brett Mullins.

I was there for all of it. Not there in person, of course, but following along every week. For five years Raiders fans didn’t really know much else except being pretty damn good.

Twenty-five years. But it’s not like the team was terrible the whole time. Indeed the Raiders made the finals eight times out of the ten seasons following the ’94 triumph.

But over time they faded away as we steadily lost the golden generation. First Mal Meninga but then slowly and steadily it was Brad Clyde and Ricky Stuart, Laurie Daley and Steve Walters and eventually even Ruben Wiki and Jason Croker.

Since then it’s been mostly a rough ride. The last 15 years have seen six final finals appearances. Eight finals games total. But I’ve been there the whole time. And plenty of others have been there with me.

I was there in 2006 when Jason Croker retired and took the last tenuous connected to the golden era with him.

There’s been plenty of heartbreak since then.

I was there in 2008 when we finished sixth but still got knocked out in week one because the Warriors somehow upset the Storm at home at the peak of their salary cap cheating powers.

I was there in 2010 when Terry Campese shredded his knee, Jarrod Croker missed a kick and the Raiders fell to a Tim Sheens-led Wests Tigers ambush.

I was there in 2012 when the Rabbits ran roughshod over a team led by Josh McCrone and Sammy Williams in the halves in a semi-final.

I was there in 2016 when Matt Prior turned into a juggernaut for a day and Michael Ennis taunted the home fans with a Viking Clap of his own (but we love Mick now because he’s on our side).

I was there in 2018 when Shaun Johnson somehow kicked two field goals in a minute to bring the Warriors home. In fact, I was there for every single one of those excruciating one- or two-point losses in 2018.

I’ve been there for some dead set Greek tragedies. Bathurst. Edrick.

I’ve been there for many false prophets. For Todd Carney and Josh Dugan and Anthony Milford.

I’ve also been there for some amazing wins. I was there for 74-12. I was there for 56-0 over the Broncos on an icy cold August night when the fans poured out their hearts as the 13th-placed Raiders dug in late to defend their line to protect that doughnut scoreline.

I was there in 2010 when the Raiders humbled the high-flying Dragons and the Crookwell boy Joey Picker scored a 30-metre breakaway try, palming off Jamie Soward in the process, while Dave Furner and Mark Webber (!) rode him home in the coaches box.

I was there last Friday for Josh Papalii barreling five blokes to take us back to the big one. 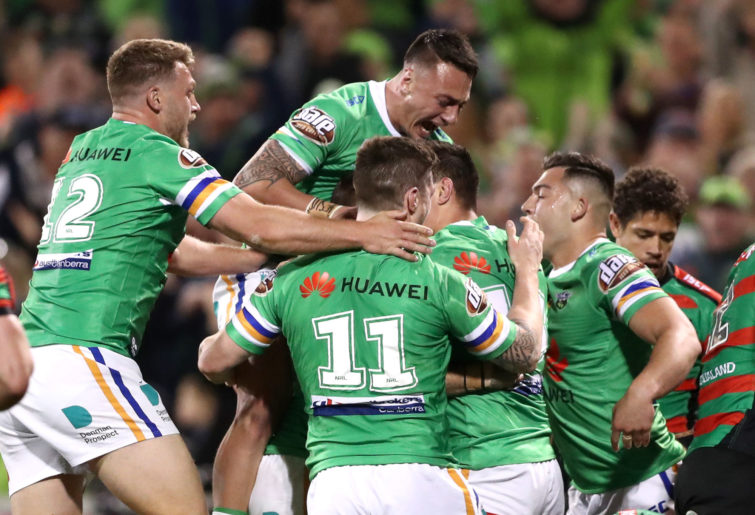 I was there for Shaun Fensom for Country.

I was there the day David Shillington lost his damn mind and dealt out a headbutt with three minutes remaining. I was also there the day he put up a pinpoint bomb under the sticks that led to a try (no really, that actually happened).

I’ve been there for icy cold and pouring rain and howling wind. But I’ve been there for the bright sunshine of a perfect autumn Sunday afternoon. I’ve walked the trail back to O’Connor ridge many a time. I’ve jumped on a bus heading for Braddon Macca’s and Mooseheads. I’ve started taking my little girls, who come only for the hot chips and the boom boom clap and the yellow stairs.

I’ve asked myself why I keep going plenty of times. My wife has asked the same question but she means it a different way. Every time I’ve wanted to quit I’ve contemplated writing this very article. I’ve had this thing drafted in my head for years and years. And that’s why I keep coming back.

All of which is to say, it won’t be Canberra Stadium this Sunday – but I will be there when we win our first premiership in 25 long years.