The Raiders have been defeated by the Roosters in the 2019 NRL Grand Final in what was an absolutely thrilling contest all the way to the final siren.

It was a magnificent showing by the Raiders in defeat, and although they will be bitterly disappointed by the result, they can hold their heads high after some very impressive individual efforts.

Charnze Nicoll-Klokstad – 8.5
The Raiders’ fullback capped off an outstanding breakout season with a huge performance in his first Grand Final.

Was in absolutely everything from the get go. Ran for 214m, made 7 tackle busts and looked a constant threat in attack.

Threw a beautiful cut-out ball to Joey Leilua in the second half, which would have resulted in a Raiders try had Leilua passed straight to Rapana outside him.

Unfortunately spent the last 11 minutes off the field after being unable to recover from cramps.

Nick Cotric – 7
Had an impressive appetite for work, but was not as effective as usual coming out of trouble as he made 16 runs for 127m.

Did well in defence. A solid effort for the NSW Origin winger.

Jarrod Croker – 8
A great captain’s knock from the Raiders’ skipper. Tried his absolute guts out all game, but didn’t get the opportunities he would have liked with the ball.

Unfortunately he will remember this game for the wayward flick pass he threw to Jordan Rapana in the second half, which would have resulted in a try had Leilua passed straight away rather than attempting a flick pass after contact.

Should be proud of his effort. 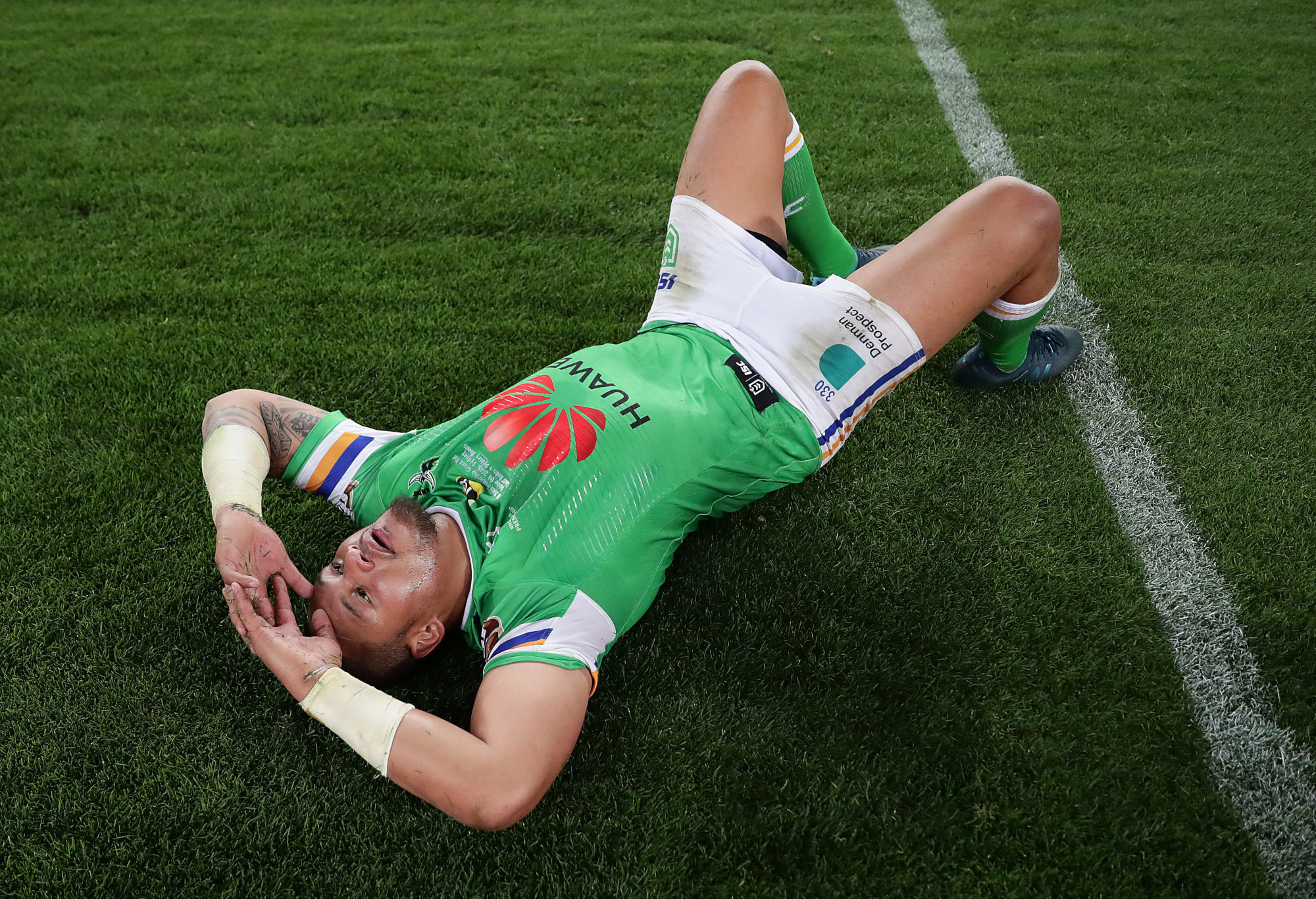 Jordan Rapana – 6.5
Solid contributor on the wing. Tried hard getting out of the red zone. Didn’t threaten much in attack. Scored a try that was disallowed for a Leilua forward pass.

Jack Wighton – 9
The Raiders’ best and the best on ground, no question about it. Scored their lone try, kicked brilliantly and worked extremely hard.

Aiden Sezer – 7
With Sezer’s future uncertain and talk that he may be going to Huddersfield, the one certainty is that he still has plenty to offer any NRL team that would pay for his services.

Sezer applied plenty of pressure to the Roosters through his kicking game, regularly pinning them back inside their own 10 as well as forcing a drop out.

Didn’t get the opportunities he would’ve liked in attack.

Josh Papalii – 8
Had the most meters of any Raiders forward with 143m off 16 runs. Bent the line back with 53 post-contact meters and worked hard in defence with 31 tackles.

Unfortunately for the Raiders he wasn’t as damaging as he was against the Rabbitohs last week and the Storm 3 weeks ago.

Josh Hodgson – 7.5
Made 33 tackles, but was nullified in attack somewhat and was seemingly hampered by a shoulder injury for much of the second half.

Iosia Soliola – 7
29 tackles for the veteran, but wasn’t as effective in attack as he would have liked, running just 86m off 11 hit ups.

John Bateman – 7
Topped the tackle count with 41, but came up with a crucial miss on Siosiua Taukeiaho late in the game which led directly to James Tedesco’s match-winning try.

Elliot Whitehead – 7.5
Looked dangerous with ball in hand, but didn’t get enough quality ball to really threaten. Great effort in defence with 36 tackles.

Joe Tapine – 8
Eight runs, 78m, 28 post contact and 34 tackles for the big Kiwi. Bent the line backwards and was hard work for the Roosters defenders to contain.

Bailey Simonsson – 5
Only got on for 12 minutes towards the end of the game when Nicoll-Klokstad went off injured. Tried hard but didn’t threaten.

Corey Horsburgh – 6
Played 35 minutes, getting through plenty of work. Ran 10 times for 84m and made 19 important tackles in the middle.

Dunamis Lui – 5
Got 26 minutes of game time. Tried hard but came up with an error right after Jack Wighton scored.