Marvel Stadium in Melbourne will play host to the biggest fight in Australian and New Zealand history as Robert Whittaker and Israel Adesanya do battle to unify the UFC Middleweight Championship.

Australia’s Robert Whittaker comes into the fight undefeated in over five years and riding a wave of momentum that has seen him beat perennial top contenders Jacare Souza and Yoel Romero (twice) on his way to being crowned the best middleweight in the world.

Unfortunately for Whittaker, injuries have restricted him to just one title defence and he has remained inactive since June 2018. A severe abdominal hernia just prior to a scheduled defence against Kelvin Gastelum forced Whittaker into potentially life-saving surgery and a long road to recovery.

Since Whittaker’s last fight, a new star has emerged and his name is Israel Adesanya. A decorated kickboxer holding a 75-5 professional record and an unblemished 17-0 in MMA, Adesanya has quickly ascended to the top of the sport.

Adesanya is brash, cocky and certainly divides opinion but nobody can argue that he is not a supremely talented mixed martial artist.

Fighting out of the famous City MMA gym in Auckland, Adesanya has gone 6-0 in the UFC since debuting against Rob Wilkinson is February 2018. Along the way he has notably defeated arguably the pound-for-pound greatest of all time Anderson Silva, and in his last fight, he defeated Kelvin Gastelum in a five-round epic to crown an interim UFC Middleweight Champion.

The fight against Gastelum was notable as it was the first time Adesanya had looked in trouble in a fight inside the octagon. Gastelum applied the pressure and landed some clean power shots that tested the chin of Adesanya, who absorbed everything that was thrown at him to ultimately get his hand raised in victory.

Once Bruce Buffer announced Adesanya as interim champion all eyes turned to a unification bout with Whittaker in Australia. Dana White shortly thereafter announced the fight would take place and Melbourne was chosen to host the mega fight. 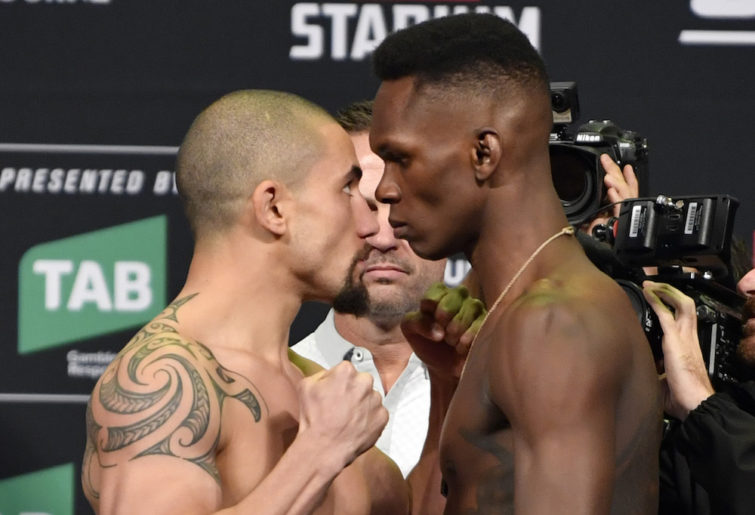 The build-up for the fight has been light on drama but high in anticipation. Whittaker is not the type of fighter who likes to engage in verbal sparring, preferring to let his work in the cage do his talking for him. On the flip side you have Adesanya who is never short of a memorable quote and will engage in trash talk every chance he gets.

As men they are polar opposite and that also translates to their fighting styles, even though they are both primarily stand-up fighters.

Whittaker will have watched Adesanya vs Gastelum and taken a great deal of confidence that a fighter who is primarily a knockout artist was able to cause Adesanya so many issues on the feet. Whittaker is the most unconventional striker in the middleweight division as he strikes from awkward angles and is very difficult to game-play for.

Important for Whittaker will be his ability to close the distance to negate the reach advantage that Adesanya has over him (six and a half inch differential). To do this he will need to utilise his wrestling to dictate where the fight takes place. If the fight takes place at distance then that plays right into Adesanya’s game.

If Adesanya is to emerge as unified champion then he will need to utilise his kicking prowess to maintain distance and frustrate Whittaker. Even though he is fairly new to most MMA fans, Adesanya has a significant experience advantage and his fight IQ is not to be underestimated. Facing adversity in his last fight, he was able to make subtle changes to his game mid-fight, which is a trait that only elite fighters possess.

The major difference in this fight could come down to Whittaker’s inactivity and whether there will be an element of ring rust, whereas Adesanya has been one of the most active fighters on the roster recently. He has fought four times since Whittaker’s last fight against Yoel Romero.

This is truly a fight where a strong argument could be made for each competitor to have their hand raised and it promises to be an intriguing tactical battle between the two best fighters in Australia and New Zealand.

Will Whittaker utilise his wrestling game and unique strikes to inflict the first loss in the MMA career of Adesanya? Or will Adesanya utilise his range to wear down the champion and cement himself as a pound-for-pound great?

Tune in Sunday to find out.