The A-League on the ABC is good news for the competition, but it won’t count for much unless teams play attacking football and get viewers coming back for more.

At least the A-League doesn’t have a monopoly on refereeing disasters.

Last night’s “six again” NRL grand final debacle will rumble on for some time yet, but the good news for football fans is that the A-League season is finally upon us.

Even better news is that 29 A-League games will be shown live across Australia in high definition on ABC television and catch-up service iview.

If the goal was to get football onto as many screens as possible, then it’s mission accomplished – sort of.

The fact that no commercial network was seriously interested in broadcasting the competition is a reminder of the task in front of the A-League.

And club officials can probably thank the W-League for opening the door, because it’s doubtful the nation’s broadcaster would have been interested if the package didn’t include the right to screen women’s football alongside the men.

Thanks too to Fox Sports for coming to the party, even if the word on the grapevine is that they’ve been looking long and hard at what their contractual obligations actually are to even broadcast this season.

Read into that what you will, but it seems obvious that one of the things an independent A-League needs to work on – and quickly – is generating new revenue streams.

By the time the Fox Sports deal is due to run out in 2023, Sydney FC attacker Kosta Barbarouses may well be set to retire.

He should at least have some coin in the bank, with Dom Bossi suggesting in the Sydney Morning Herald that Barbarouses is “set to earn $750,000 per season” wearing sky blue.

More power to the Kiwi star. Who among us would turn down that sort of money?

But Barbarouses might be a bit of a bellwether in more ways than one this season, and not just because Sydney FC need him to drive their attack.

Because if there’s less money coming into the league either now or in the future, then A-League clubs may need to re-think the sort of salaries they’re willing to pay to players.

And even if the A-League remains on Fox Sports for the foreseeable future, the clubs will probably still need to use whatever free-to-air exposure the ABC affords them to try and generate some outside interest in the game.

That’s where a player like Barbarouses can help, and where some of these seemingly disparate threads come together.

Because one thing the A-League hasn’t always done – particularly in the last couple of seasons – is provide much entertainment by way of attacking football. 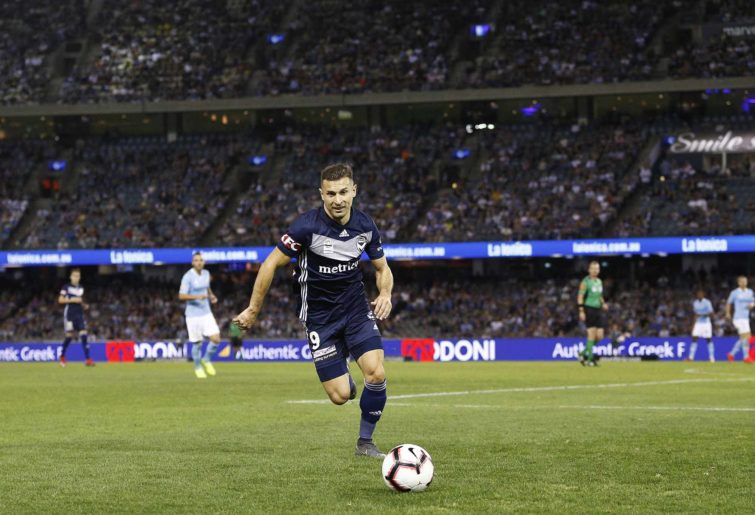 Kosta Barbarouses when with the Victory. (AAP Image/Daniel Pockett)

Too many A-League coaches and the clubs that hire them see their solitary role as to avoid defeat.

That might be fine if A-League games were always sold out and commercial suitors were banging down the door.

But is sitting back and absorbing pressure the sort of mentality the A-League needs to showcase to a new audience on the ABC?

The reality is that this A-League season has the potential to be the most exciting campaign yet.

Between the addition of Western United, the expected resurgence of Western Sydney Wanderers, a Melbourne Victory rebuild and the return of last season’s champions Sydney FC and premiers Perth Glory respectively, there’s not exactly a shortage of storylines.

But someone might need to remind the clubs they’ve got a duty to entertain as well as simply collect competition points.

It’s attacking football that will have repeat viewers tuning into the ABC’s free-to-air coverage, so here’s hoping the Wanderers and Mariners serve it up in Round 1 on Saturday afternoon.

Plenty of things need to go right this season, but the ABC’s new free-to-air television coverage may just be the most important.