It is not hard to imagine Michael Cheika waking up in a cold sweat in the middle of the night, clutching at the bedsheets.

Maybe he has had his recurring nightmare again, the nightmare of Eddie Jones grinning out of the gloom at him, knowing he has chalked up another win for England.

The typical definition of a recurring nightmare goes thus:

“Recurring dreams usually mean there is something in your life you’ve not acknowledged that is causing stress of some sort. The dream repeats because you have not corrected the problem…

“People having a night terror are still asleep but may look like they are awake. For example, they may sit up in bed screaming with their eyes wide open. When they actually do wake up, they usually have no memory of the episode.”

Recurring nightmares can cause a great deal of anxiety, and one of the antidotes is a process called ‘lucid dreaming’. Through lucid dreaming, the dreamer attempts to enter the dream-scape consciously and gain a kind of creative control of the narrative and the characters within it.

Lucid dreamers can learn to expose themselves to their worst fears without surrendering to them, and emerge from a bad dream with a more cheerful ending.

During his tenure as Australian head coach, Michael Cheika’s worst nightmare has not been New Zealand, it has been England. The experience has probably been worsened by the fact that he and Eddie Jones were once playing confederates and good mates at their club Randwick.

While the average margin of Australian defeat has been identical, 15 points, the Wallabies have at least managed to inflict three defeats on the Kiwis in the course of their 14 matches.

Against England, they have never been able to close out the games in which they had a chance of winning. They have died in the clutch. This suggests that Cheika may have some demons to confront if, as seems likely, England meet Australia at the quarter-final stage of the World Cup in Japan. He will have to find a way to enter his dream lucidly, and outwit his toughest adversary since the last World Cup – an Australian working in Old Blighty.

The forms of the nightmare have varied over the past three years. For the most part, they have been connected with the superiority of England’s kicking game and their work at the set-piece.

On both counts, the Wallabies have increased grounds for hope in the knockout stages. They have refined their exit routines to the point where they are a strength rather than a weakness, while the English set-piece is unlikely to provide the dominance which is so often seen as its traditional preserve.

Since the warm-up matches in the summer, Jones has taken on board the viability of playing two dedicated openside flankers – Tom Curry and Sam Underhill – alongside a non-jumping No.8 in Billy Vunipola.

In the weekend’s crunch match against Argentina, second-rowers George Kruis and Maro Itoje were the primary lineout receivers, plus one auxiliary in Curry. There is no reason to doubt that this was not Jones’ first choice XV.

Australia, by contrast, have a third genuine primary option, Isi Naisarani, with Michael Hooper able to provide secondary support. They will enjoy one more lineout receiver than England, even if they pick David Pocock and Hooper together in the back row.

If there is a danger area to address, it may turn out to be coping with England’s manipulation of the shortside on offence.

As far back as working for Wales against Jones’ Wallabies in 2005-06, Eddie was a true artist in the construction of shortside attacking opportunities. The game against the Pumas was a timely reminder that this is still very much the case.

England created and attacked shortsides from a wide variety of situations.

One of the most basic indications of Jones’ preferences occurs from kick returns, where he likes to have his fullback, Elliott Daly, run first towards midfield, then back to the side of the original point of receipt:

Daly angles towards the 15-metre line, then bends his run back to the original touchline to create a nice chance for right winger Anthony Watson.

This was a repeated theme both before and after the sending-off of Pumas second-rower Tomas Lavanini:

After Watson spins the ball infield to Daly, he has George Ford and Johnny May outside him, so there is the potential to move the ball across the field – but his first trained instinct is to cut back and link up with Watson: 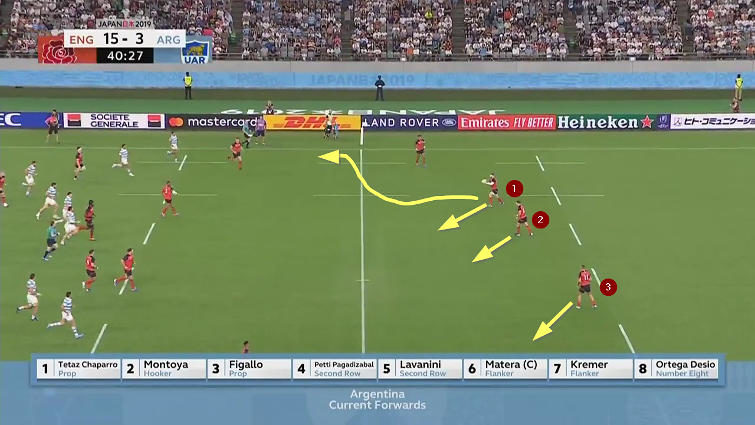 In this instance, from the 51st and 52nd minutes of the game, England doubled down on the shortside emphasis after the initial return:

After the first cut by Daly, England load up on the shortside after one more phase into midfield. At the critical moment, they achieve a six-on-three advantage: 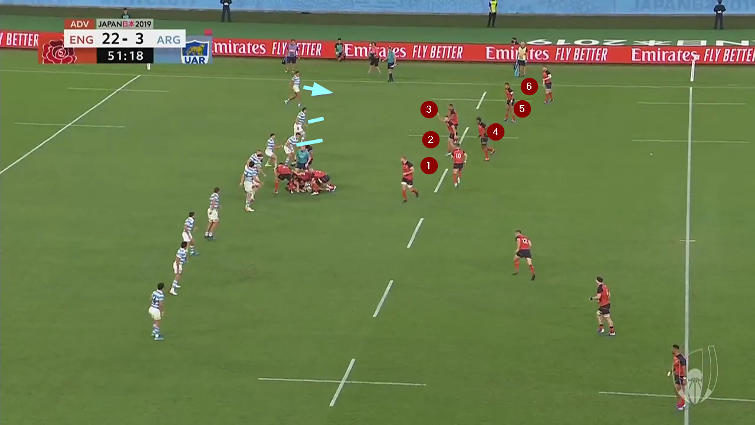 England announced their intentions with a simple try to open their account, from a five-metre lineout:

The maul has been driven towards the posts, then Ford skips around to the shortside to create a straightforward touchdown for May.

From set-pieces further upfield, the look is slightly different, but the goal is still the same:

From a scrum on the left, May takes the ball into midfield on first phase, and the following pick-and-go from Vunipola gives May and Daly time to regroup to the shortside, which has now been created. You can see May getting up off the ground after the tackle, and sprinting back to his natural wing.

After Vunipola’s drive on second phase, the England backline already looked like this: 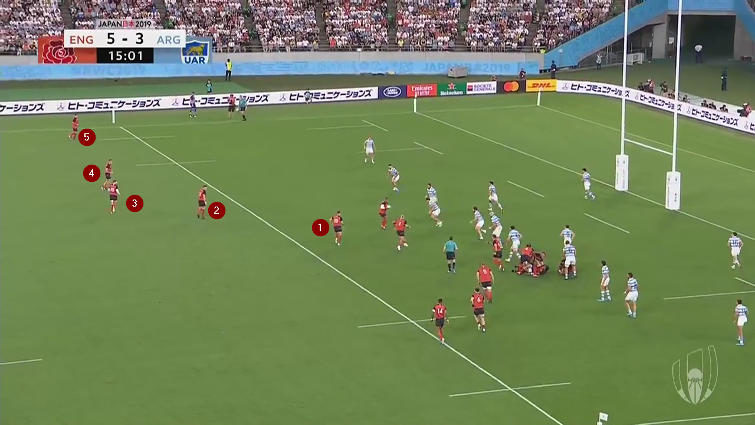 As Kyle Sinckler receives the ball, they have Ford, Owen Farrell, Daly and May reassembled to the left, with hooker Jamie George loitering in the five-metre tramlines beyond them. The Pumas’ defence on that side is looking stretched to cover all of them.

The advantages of creating a successful shortside attack is that you can often create mismatches in personnel quickly. In the lineout drive try, Ford and May are working against Julian Montoya and Benjamin Urdapilleta.

In the following example, after two phases from lineout into midfield, England are working with Farrell, a natural distributor, and two potent attackers in the shape of Manu Tuilagi and Watson against the Pumas’ numbers 8, 10 and 11:

Once you can attack the shortside, you can also work an advantage in numbers more effectively to the bigger side the field:

A powerful scrum opens up the shortside and draws three Pumas defenders (including their scrumhalf) in that direction, before the ball is spun wide for May to make a run deep into the Argentine 22.

Summary
Cheika may have to confront some inner demons if, as seems likely, his Wallabies clash with the old enemy England in the World Cup quarter-finals.

Cheika has to find a way to do what he hasn’t done before, and upset Jones’ applecart. He has to identify where Australia can hurt their opponents, and where England will be looking to inflict pain on his charges. He needs to enter his nightmare lucidly, and weigh up the areas in which damage will be received and given. 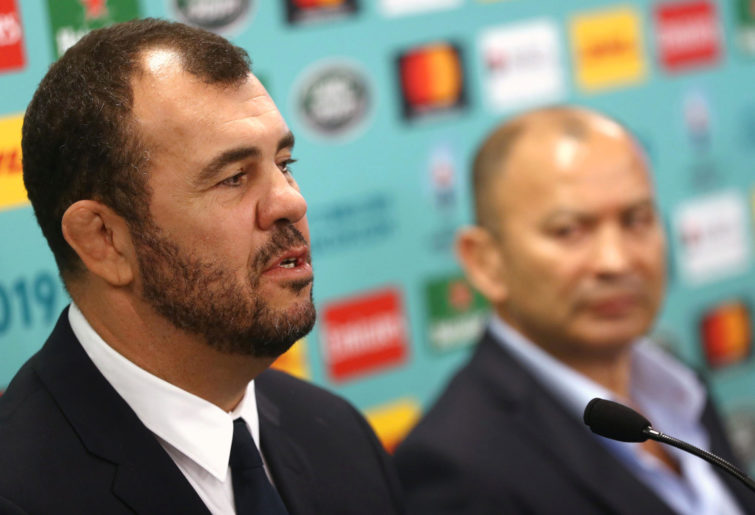 Unusually in a rugby game between England and Australia, that damage is unlikely to be received at the set-piece. The Australian scrum should provide a solid platform against Mako Vunipola and Kyle Sinckler in the England front row, while at lineout time the Wallabies will actually enjoy an extra receiver, even if they select the ‘Pooper’.

The real challenge may well turn out to be the management of the England kicking game and finding an effective reply to it – and defensively, responding effectively to Jones’ wide repertoire of shortside attacking ideas.

Do that, and Michael Cheika may well be able to end his own recurrent nightmare once and for all: having to meet and greet Eddie Jones with a smile on his face, while deep down knowing England have the wood on his Wallabies.

There’s a chance, though, to put one over on his old mucker from the Galloping Greens, and put another one over the Old Enemy at the highest-profile tournament of them all.

What more could anyone want?