A full analysis of the Caulfield Guineas

It’s been a big week in racing, with Racing NSW boss Peter V’Landys suggesting the Melbourne Cup should be moved further back in the spring (not the worst idea), before Darren Weir and his former team were hit with a string of police charges.

Without wanting to skip over these talking points, they might be better discussed once the shock factor evaporates.

The positive is that the Melbourne Racing Club has assembled some excellent fields for Caulfield Guineas day and the feature race looks to be a cracker.

Below I’ve taken a look at each runner in the race and put together my thoughts on their chances.

I love the breeding profile of this fellow and sadly we didn’t get to see how he is travelling in the Guineas Prelude after he lost his rider. The former Kiwi showed plenty of talent across the ditch and hasn’t really raced over a suitable distance since arriving Down Under.

He’s not the worst roughie in the race, but I couldn’t tip him with confidence.

Did a bit wrong in the prelude but you couldn’t ignore the way he finished off the last 100 metres. He would have been shorter in the market if he drew a better barrier, but hopefully he’s a bit sharper on the back of his last run and Hugh Bowman can get him to get moving a little quicker on Saturday.

I think he’s a winning chance and could certainly claim the cash, but he’s pretty short to be piling in.

My old mentor Phil Purser used to tell me: “Don’t back against unbeaten horses”. This horse has raced five times for five wins and got the chocolates a fortnight ago in the prelude.

Ryan Maloney gave him a peach of a ride that day from a good barrier. Whether he gets that kind of run this Saturday remains to be seen. Has to be considered one of the best hopes in the race and has the breeding to suggest the mile will be of no concern.

The trip to Victoria might do this colt the world of good, but I can’t back him with any kind of confidence. He’s not going that well this spring and I think there are others with better claims.

This one-time boom colt made my list of horses to watch this spring and I’ve been watching with keen interest. He won first-up in the McNeil but hasn’t set the world on fire since.

This son of Dundeel will appreciate the better barrier after drawing wide in the prelude and is definitely one to include in your exotics if he brings his best form.

Stable is flying so you have to respect that, plus he’s one horse in the field that has actually won over 1600m. You couldn’t fault the win in the Stutt Stakes and I think the odds are pretty generous considering this is an even bunch of three-year-olds.

He will make his own luck on the pace.

A big stable horse who has been rock solid in all five career runs to date. It wouldn’t surprise me to see him run a big race, but I think there are others who deserve consideration.

Won over the track and distance a few weeks ago, albeit in much weaker company. Damien Oliver will give him every chance but he’ll be struggling to keep up when the sprint goes on.

I tipped him and backed him in the prelude and he ran a credible fourth. Linda Meech didn’t really do anything wrong when in front, but the horse just got beaten.

I think from barrier one Meech can either lead again or take a sit behind The Holy One. I don’t think he can lead all the way and win, but if he box seats behind the leader, this son of Fighting Sun can run a huge race.

He’s won once in eight starts and that was in a maiden on the synthetic at Pakenham. Not even some Leon Corsten’s magic could get him over the line. 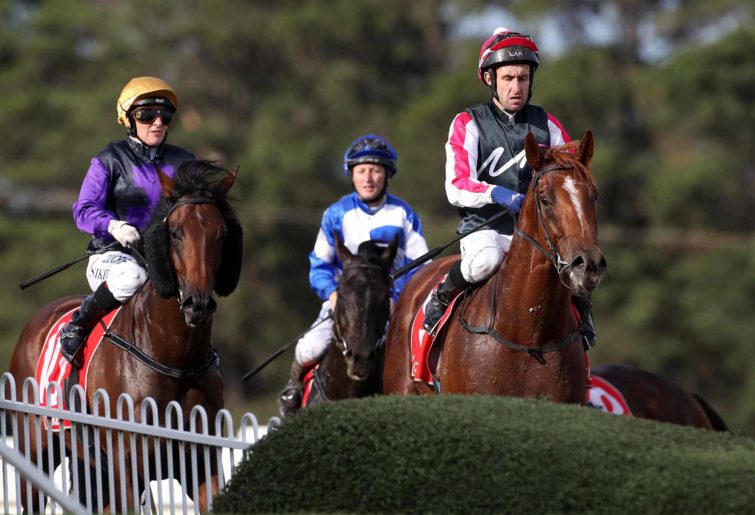 Love the stable, love the jockey, don’t love the horse. Like Stand to Attention, his only win came on a synthetic track at Pakenham. He won’t disgrace himself, but he doesn’t have the class to win.

He had every possible chance to win the Stutt Stakes and didn’t. Craig Williams will give him every opportunity to be there in the finish but I just think there are better prospects in this Group 1 race.

A bit like the swimmer he was named after, this son of Olympic Glory won’t be anywhere near the podium on Saturday.

Ken Keys and a lightly raced three-year-old? Yes please. The master from eastern Victoria knows how to train and this son of Shamus Award might spring a surprise on Saturday.

He hasn’t put in a bad one yet and his father ran third in this race before winning the Cox Plate. Not the worst horse at double-figure odds.

Went past a few in the prelude and draw better this time around, so could finish in the top half-dozen. But I don’t think he can be in the finish.

Respect the stable, but this horse has got as much chance of me riding in the Melbourne Cup.

Needs one more scratching to get a run and has been kept safe in betting. Ran a nice third in the prelude and comes from a good yard. If he gains a start, include in your exotics.

Hasn’t won a race, needs two more scratchings to get a start and won’t be winning this.

Summary
The best horse in the race is probably the favourite Dalasan. But he’s drawn badly and laid in a little down the straight last run. He would need luck to go his way to win.

I think the horse I tipped a fortnight ago, Roccabascerana, is still great value. He’ll either lead or sit behind the leader and be given every possible chance by Linda Meech. At double-figure odds, I’d be backing him or Soul Patch. Yourdeel could be the best of the roughies.