A trophy tailor-made for a national second division

Could a nearly 100-year old trophy be the icing on the cake of the proposed national second division?

One of the things football in Australia has been very good at is forgetting its history. Countless trophies and cups have been lost, stolen or just plain forgotten about.

Take the Australian Cup as an example. It was a trophy for a club knockout competition played prior to the beginning of the National Soccer League. It had to be rescued from a dumpster when the Hakoah Club in Sydney was being renovated.

Two of Victoria’s earliest football trophies dating from the 1880s were stolen and pawned and then never seen again.

The Gardiner Cup, once the greatest prize in New South Wales football, was played for from 1888 until it was lost after being contested for 40 years.

On virtually every occasion the disappearance of these trophies coincided with power struggles in the game. The old chestnut that history is written by the winners is only too true in Australian football.

The group that wins power more often than not forgets about the past as it tries to forge a new identity. Sometimes the past is simply ignored, other times it is more insidious – the past is deliberately avoided. It is regarded as an embarrassment or hindrance to the new order.

As a result, Australia’s football history has become compartmentalised. It doesn’t need to be.

There are encouraging signs that change is in the air. Recent books by Andy Howe, Ian Syson, Peter Kunz and others have helped bring awareness of the game’s rich history. The FFA has even established a football heritage committee.

With a movement to form a national second division underway, now might be a good time to resurrect an old trophy as a symbolic way of connecting football’s past with its present. 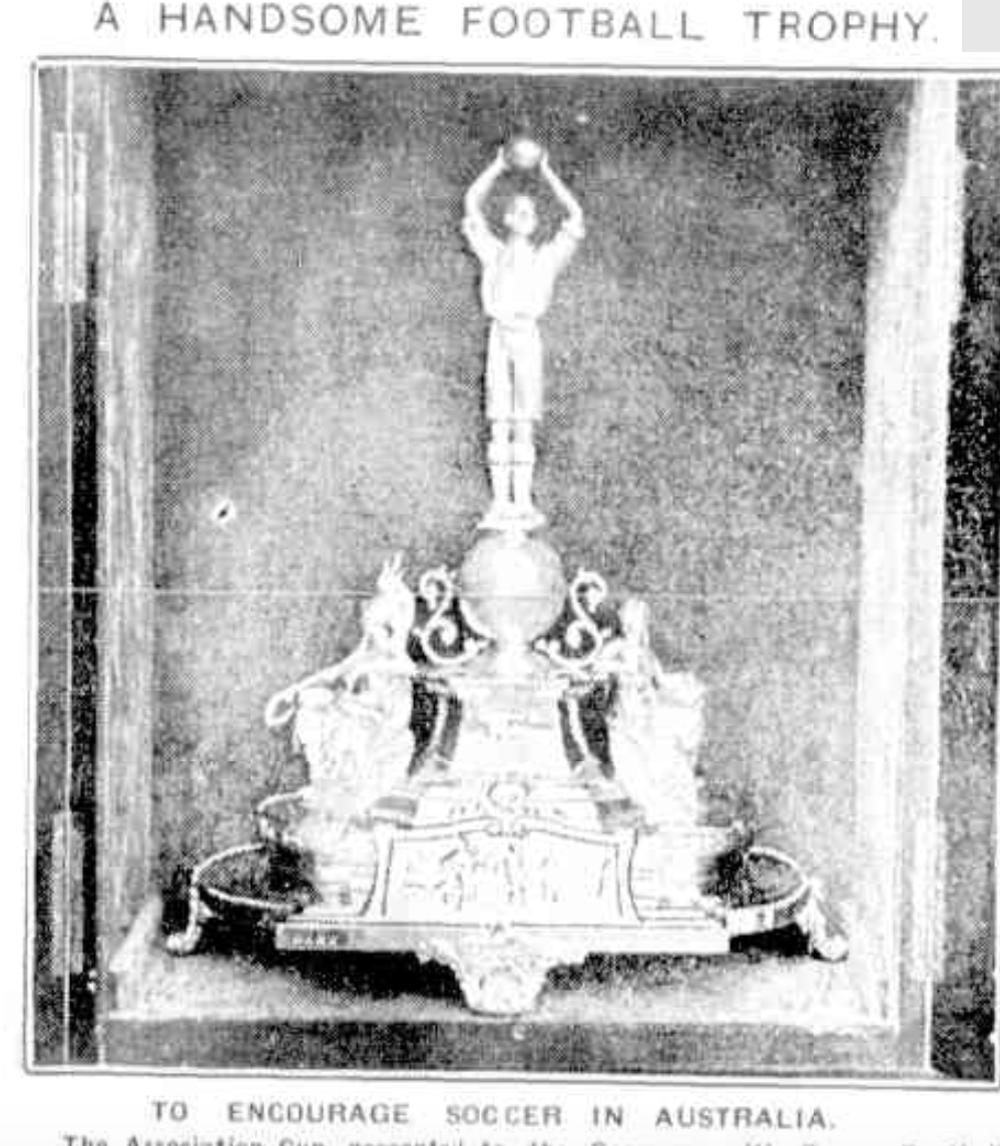 The design of the trophy is unusual. The central figure is a player holding the ball above his head, about to launch a throw-in. Two figures, representing Australia and Britannia, are lounging around below. It’s all very art deco, but it’s a creation of its age. With a value of around $80,000 in today’s money, it was a significant piece of silverware. There’s certainly nothing fake about it.

The stated aim of the trophy was to encourage competition between the states to help improve the quality of domestic football in Australia. In essence, it was to be football’s version of cricket’s Sheffield Shield.

As a trophy for competition it never really took off. Tournaments were played sporadically. It was expensive for interstate teams to travel and the standard of competition varied. When New South Wales competed seriously it racked up double-digit scores. Sometimes New South Wales would not compete, making a mockery of the competition.

The good news is that this is one trophy that still exists and my mail is that it is held by one of the state federations. It has been nearly 60 years since the trophy was last competed for and it’s due for a rebadging.

This trophy absolutely works for the proposed national second division. There’s no question that it will be competed for seriously. As a domestic competition between Australian clubs, the original premise of the trophy will in general terms be preserved.

It will be the national second division where the rubber hits the road in a compromise between the so-called ‘new’ and ‘old’ football. What better way to symbolise this with a genuine trophy that predates both these eras.

Perhaps the time has come to retrieve it from under the sink, blow out the dead cockroaches and give it a rub with Silvo. Trophies, after all, are meant to be held aloft at least once a year.

The shut-down of the A-League and National Rugby League brought an end to the last sporting codes in Australia that had played on with empty stadiums as society continues to deal with the global impact of the coronavirus.