Typhoon Hagibis has everyone stirred up at the RWC

Did anyone ask for Ben Skeen’s advice on whether they should cancel Rugby World Cup games this weekend because of the approaching typhoon?

What he’d propose would be as unpredictable as his TMO work at the tournament so far, but one thing is certain – he wouldn’t mind getting involved.

Skeen would make Mother Nature accountable. Don’t think that she can go throwing her weight around in the form of Typhoon Hagibis.

A Category 5 typhoon expected to deliver heavy rain and brutal winds of up to 270km/h and hitting Japan’s southern island of Honshu over the weekend?

He wouldn’t stand for that. Never mind that it’s what’s been happening for hundreds of years.

Leave it to Ben. He’ll fix it. Like Samu Kerevi had to pay the price for having the audacity to bump Rhys Patchell out of the way at Tokyo Stadium, Typhoon Hagibis needs to know it can’t be getting so aggressive.

Even though it is typhoon season in Japan, World Rugby’s announcement that two of Saturday’s Rugby World Cup games – England against France in Yokohama and New Zealand’s clash with Italy in Toyota City – had been cancelled because of the approaching typhoon was still stunning.

World Rugby called it “regrettable”, which was mild compared to the general feeling among fans exasperated that there’s no compromise from cancellation.

What about games shifted to the indoor stadiums? To prefectures that weren’t going to be badly affected by the typhoon? Hong Kong? World Rugby gambled that the six-week tournament wouldn’t be weather-hit, but they’ve lost.

It is the first time in World Cup history that a match has been cancelled.

Japan might qualify for the Rugby World Cup quarter-finals for the first time if their final pool match against Scotland in Yokohama on Sunday is scrapped. It feels like Typhoon Hagibis might have timed its run nicely to look after the host nation.

A pool-deciding abandonment would also feel like Karate Kid II, when the Okinawa storm stops the village-deciding showdown between Miyagi and Sato.

However, that did heap the pressure on Daniel-San, who had to duel with Sato’s fearsome nephew – a bit like what would happen if Japan lined up against the All Blacks in the quarters.

The typhoon, called “violent” by the Japan Meteorological Agency, will have a significant impact on the World Cup’s quarter-final permutations, with the cancelled games to be registered as scoreless draws.

England will progress as Pool C winners and they will almost certainly face Australia, whose match tonight against Georgia in Shizuoka – 200km southwest of Tokyo – will go ahead as scheduled.

A Wallabies win will ensure they finish runner-up in Pool D, as long as Wales knock over Uruguay. Even a cancellation there would result in the Welsh topping the pool.

Then we’d have the Wallabies to face England and France to tackle Wales.

So how has the typhoon affected the Wallabies?

It was very likely that Australia, following their loss to Wales, would take on England anyway as Eddie Jones’s team would’ve probably been too strong for Les Bleus.

Are England underdone, or is fresher better compared to the Wallabies?

In the pool of death that was meant to push them hard – drain them – they’ve only really been tested by a 14-man Argentina. Tonga and the United States weren’t too arduous.

So the way it’s panned out, and through no fault of their own, England have gone from facing one of the tougher draws to sitting pretty with one of the easiest.

England are leaving Tokyo for Miyazaki on the southern island of Kyushu to avoid Typhoon Hagibis.

Miyazaki hosted England’s pre-tournament training camp. It’s also not far from Oita, where their quarter-final is scheduled to be played next week.

“We’ll have a short camp in Miyazaki and then we’re off to Oita,” Jones said yesterday.

“We have an exceptional record in two-week preparations.”

They seem set on starting George Ford at flyhalf, moving Owen Farrell to No.12. Their back-row of Sam Underhill, Billy Vunipola and Tom Curry looks set. Jamie George looks to have beaten Luke Cowan-Dickie as hooker. If anything they would’ve liked to get more minutes into Mako Vunipola and Jack Nowell, who have only recently returned from injuries.

Meanwhile, the Wallabies will get to play all four pool games as they continue to search for the right combinations and discover the rhythm missing in their attack so far.

One thing they will want to improve against Georgia is their starts, which have been especially sluggish against Fiji and Wales. Their ball control was poor early and their defence clumsy.

Matt Toomua gets an opportunity to seal the No.10 jersey for the quarter-finals. It’s deflating that it’s taken this long to settle on the key playmaking spot, while Nic White gets the nod at scrumhalf.

Of significant interest will be the balance of the back-row with Michael Hooper being rested – or whatever “general soreness” means – and David Pocock starting at openside flanker in a back-row alongside Jack Dempsey and Isi Naisarani.

There’s the chance that the sight of Pocock back in the No.7 jersey for the first time in a long time might stir thoughts that the relatively lightweight Hooper isn’t the right fit to face England. 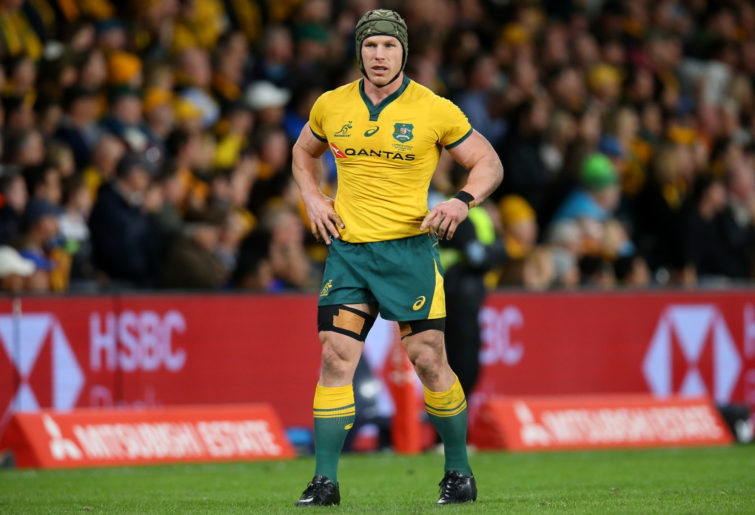 David Pocock of the Wallabies (Photo by Jason McCawley/Getty Images)

Rory Arnold has been below his best so far – a far cry from his Bledisloe form. He could do with some more carries and more pace around the field.

In fact, the burly Georgian forwards will provide a decent hit-out for the Wallabies as their biggest frailty against England will be facing their powerful pack.

The Wallabies need the workout and need the opportunity to build more cohesion and urgency. The worry is that given the microscope by match officials on collisions so far at this World Cup and the inconsistencies and delays that make viewing often infuriating, one more game means a chance to get red carded or cited with the knockout stages about to start.

Tolu Latu, Kerevi, Dempsey and Arnold are the ones that might need to temper their aggression against Georgia to ensure they are available next week. At least Ben Skeen isn’t the TMO.