After playing six seasons of Super Rugby in Australia, Hugh Roach headed across the ditch this past July to link up with New Zealand provincial side, Tasman.

Tasman compete in the ten-round Mitre 10 Cup, which runs annually from August to October. They play in the top-tier Premiership division, which boasts New Zealand’s seven best provincial teams.

The Tasman side is known as the Mako, which is a fast-swimming, aggressive species of shark native to this part of New Zealand. Players – including Roach this season – frequently raise their hand above the head in the shape of a fin after scoring a try.

Roach’s shift to the Mako came about after his rugby career in Australia had hit a crossroads. When his Rebels contract expired at the conclusion of this year’s Super Rugby season, he sought a change of scenery.

“I was looking to move on. I felt like I had ticked a lot of boxes at home and was at a bit of a stalemate. I guess I just wasn’t moving forward anymore,” he divulges. “Someone rang me up from Tasman – they needed a hooker – and I was on the plane within a week.”

Since his whirlwind trip to New Zealand, life on the pitch has been truly tau kē (great) for Roach. His side have won nine from nine, and are just one victory away from matching the 2007 Auckland side as the only teams ever to go undefeated in the Mitre 10 Cup’s regular season.

Tasman have built their success this campaign on a bedrock of strong defence. Incredibly, they have only allowed their opponents to score a total of 86 points. At less than ten points conceded per game, this standard of defence is unprecedented in New Zealand provincial rugby.

Roach gives much of the credit to the team’s defensive coach and former Mako player, Shane Christie.

“Defence is massive for us, and it’s been driven by a Tasman icon,” he says. “The systems that he has brought to the team are fantastic. They’re easy, they’re simple but he expects a lot from us, and we expect a lot from each other. If anyone is scoring against us, we take it pretty personally.”

Indeed they do. Tasman have kept four of their oppositions try-less this season, including two complete shut-outs. The most significant of these was against reigning champions Auckland, who they blasted 40-0 in Round 8.

They are not bad on the attacking side, either. The Mako have scored more points (344) than any other team in the Cup this season, and just about everybody is contributing to the cause. After nine games, 20 different Tasman players have scored tries. 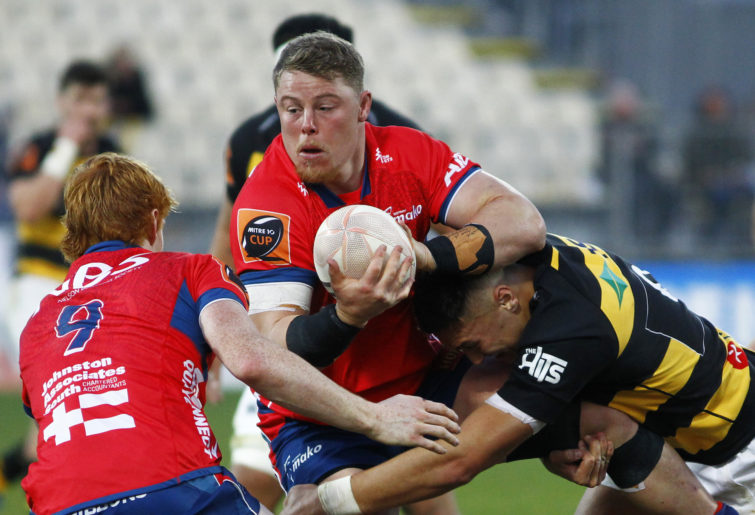 At the centre of all the outstanding play has been the team’s captain, David Havili. The capped Crusader and All Black shares a residence with Roach, who speaks effusively of his skipper.

“I can’t speak highly enough of Dave Havili,” he says. “He’s an absolutely fierce competitor who leads by example. Ever since I got here I’ve been looking up to him as a player and a leader.”

Also under that same roof is Mako lock and vice-captain, Quinten Strange. Roach and Strange have formed a fine tandem in the set piece and around the park all season. The Aussie rake believes that Strange is a certain All Black of the future.

There is plenty more talent where they came from. Tasman boasts no less than six All Blacks, including Havili, Wyatt Crockett and Liam Squire. Roach refers to his front-row mate Crockett as a “God among us”.

Despite the divine company surrounding him, Roach has caught plenty of people’s attention himself this season. He has certainly shown a nose for the try line by dotting down an impressive three times in just seven matches played.

Apart from that, Roach has been his typically industrious self. Wreaking havoc at the breakdown, throwing sticky darts into the line-out, and running with the ball like an incensed boar are what we have come to expect from the former Waratah.

Roach acknowledges the culture created by Tasman Rugby for enabling him and his teammates to succeed. He credits the democratic approach taken by management, which is in contrast to his experiences from the past.

“There’s a lot of collaboration here between the coaches and the players – and not just the leaders,” he says. “In a lot of team meetings management will ask what everyone thinks. Quite often, when the boys come up with something, we’ll change things. This is quite different to Australia where the approach is this is what we’re doing, and how we’re going to do it.”

Apparently Roach has had little time for pursuits outside of rugby since landing in Kiwi-land. Nelson offers an assortment of adventure activities, such as caving, hiking and surfing, but it has been rugby, rugby and more rugby for the 27-year-old.

Roach did note the beautiful weather, which has been sunny practically every day since he landed there. While being interviewed, he was basking in the South Island sun on his friend’s veranda, enjoying higher temperatures than his home city of Sydney at the time.

This is not as ironic as it seems with Nelson renowned for being NZ’s sunniest region. The city is situated at the top of the South Island on the Eastern shore of Tasman Bay.

The Tasman rugby team represents Tasman, Nelson City, as well as the Marlborough region. Their first two home games this season were played in Blenheim before they switched venues to Trafalgar Park in Nelson.

The team draws some of the competition’s biggest crowds to their home games. The level of support has really impressed Roach.

“The team is just backed so much by the fans who love the team and can’t wait for the weekend. Everyone wears Tasman kit around town, and know all of the players,” he declares.

The blue-and-red outfit have already clinched home-field advantage in the finals with one round remaining. They will host a semi-final and, if successful, the Premiership final on October 26.