The wearin' of the Sherrin

Smell is a great trigger for memory. So is pain.

After a match a few Saturdays ago I was taking my please-wait-until-the-second-siren-has-sounded shortcut across an inner-city AFL venue, when I was smacked in the face by an errant, wet footy.

The pain was exquisite. My eyes watered, my nose ran, and the left side of my face was flushed a delicious red. And then there was that unmistakable wet footy smell. Immediately the olfactory trigger was pulled and I was shot back to my childhood of rain-soaked lunchtime football matches.

I attended one of hundreds of St Patrick’s primary schools in western Victoria. We wore green jumpers, played cricket in summer, footy in winter, and somehow found time for marbles, yoyos and chucking yonnies at the convent across the road.

Yes, I regularly participated in the grand old tradition: the wearin’ of the Sherrin. 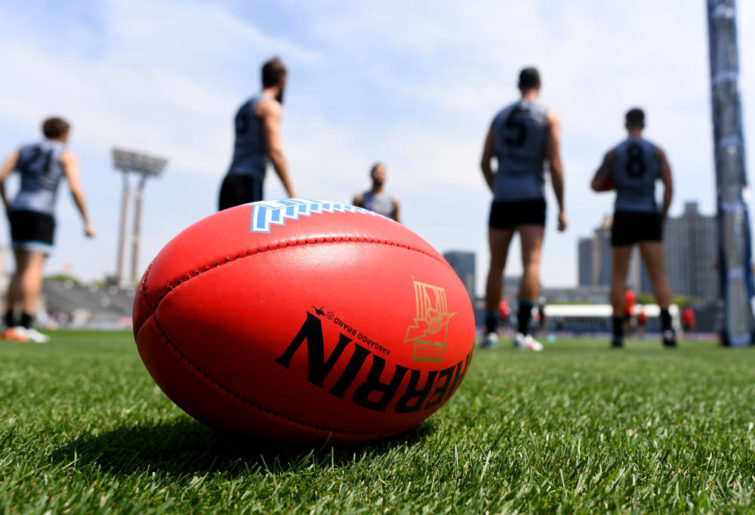 One day I saw a kid wear something else. Peter “Angel” O’Rourke had, as his nickname suggests, unearthly grace. Chris “Muttonhead” Fitzgibbon was an idiot. I was in my fourth year at St Pat’s and it was early November, the sporting cusp, when footies are still being kick-to-kicked and the first cricket bats of the season are getting an airing.

About 20 of us were having a kick and all goin’ the speccy. A nice drop kick came to our end and Angel O’Rourke flew like a bird. He perched on the pack, as light as dust, stretched out his arms, and prepared to take the Sherrin, lace out, right in front of his eyes. The perfect mark. But he was unaware of a great danger behind him.

Muttonhead Fitzgibbon, wielding a cricket bat, had screamed into the pack. He also flew high, but ugly, vulture-like. Muttonhead wanted to hit the Sherrin for six before anyone body else could lay his hands on it. He played a savage pull shot and connected… deliciously flush with the left side of Angel’s face.

Angel O’Rourke fell from the sky as only the unconscious can – with a total disregard for landing. He went face down in the rich volcanic loam and lay motionless.

Muttonhead made appropriate use of the F word and cried, “I killed him!”

We rolled Angel over, and he was dry. No worries, he was only half dead. A strong teacher came, slung Angel over his shoulder and took him to hospital to have his head X-rayed.

Angel’s X-ray came back all clear, Muttonhead’s revealed that his skull contained two short planks, a brick and a blood clot. They were both back at school the next day.

I wonder if Angel O’Rourke ducks his head every time he smells that willow and linseed oil combination that goes into making a cricket bat.

And wouldn’t it be great if someone could get 10,000 wet footies and distill their very essence so that we could pop some in the old oil burner and relive our own St Patrick’s childhoods without having to experience the exquisite pain that goes with wearin’ the Sherrin.

Finally, a round in which my tips (bar one or two games) went largely to plan!