When Hannah Green won the KPMG Women’s PGA Championship in June, she was the first Australian woman to win a golfing major since 2006. This was when Karrie Webb won her last of seven, the Kraft Nabisco Championship.

In the intervening period, Geoff Ogilvy, Adam Scott and Jason Day all won majors. Scott and Day are still regular contenders on the men’s tour, as are Marc Leishman and Cameron Smith.

However, after all that time, it is the women’s tour where future success looks the brightest for Australia, with a young brigade shining through.

Hannah Green is only 22 years of age. She turned pro in 2016 and worked her way through to the Symetra tour in the US in 2017, a kind of futures tour. She won three events, took out rookie of the year and gained her ticket to the LPGA.

The year 2018 was all about building experience on the biggest women’s tour. The 2019 Women’s PGA Championship in June this year would prove to be her first win on the LPGA tour, in a major no less. She led from start to finish, finishing with a clutch putt at the last hole to secure a one-shot victory over South Korea’s Park Sung-hyun. Karrie Webb was there on the 18th to congratulate her. You could sense the baton had been handed over.

To prove it was no fluke, Green backed up in August to win the Cambia Portland Classic. Green birdied three of her last six holes to win by one stroke. In the space of just under two years, she has rocketed up the rankings to No.18 on the tour. As the first women’s major winner for 13 years, she can consider herself very unlucky not to be nominated for The Don award last week.

However, she is not the highest ranked Australian. That honour goes to Minjee Lee, who is ranked seventh in the world. 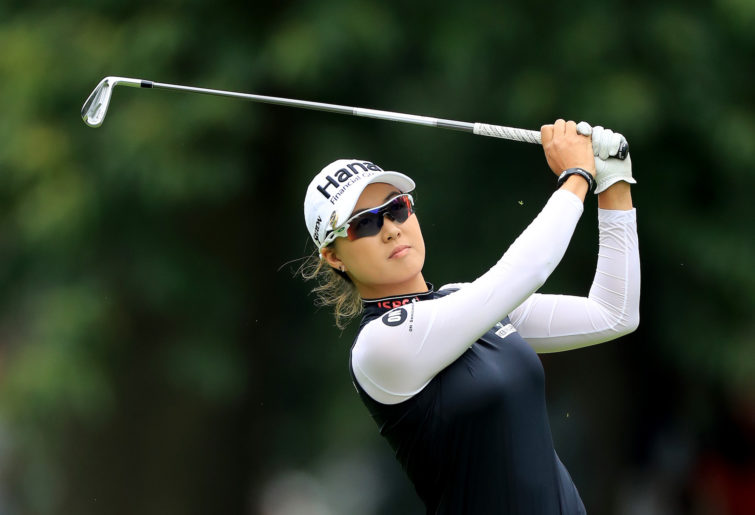 It’s hard to believe that she is only 23, having turned pro in 2014. She has had five LPGA tournament victories, the latest in April this year in the Hugel-Air Premia LA Open. Making a long birdie putt on the 18th hole in the final round, she secured a four-shot win.

Her ranking success is a product of her consistency, with eight top-ten finishes during the year. If she can keep her form, this should result in Minjee Lee also winning a major.

The third Australian woman to keep an eye on is Gabriela Ruffels, who won the US Women’s Amateur Championship in August, with a one-shot victory. Originally a highly credentialed tennis junior, she switched to golf at 14 years of age. Five years later she won arguably the biggest amateur event in women’s golf – an event that no Australian had won in its 119-year history.

She may still be a year or two away from turning professional, but Ruffels is another Australian golfer with a big future.

There seems to be a real camaraderie there as well, with Minjee Lee one of the first to congratulate Hannah Green on the 18th hole after her major win. Hannah Green, in turn, was amongst the first on social media to congratulate Gabi Ruffels on her win. The Tokyo Olympics loom large and you would expect Lee and Green to compete for a medal.