Six talking points from A-League Round 1

The A-League has returned with a bang, drawing tremendous crowds, a smattering of goals, limited controversy, and a renewed energy about the league. Here are six talking points from the opening round of season 2019-20.

VAR-free zone
This season you will see something different in this column, as we make every attempt imaginable to steer clear of talking about officiating in general, but more specifically, the Video Assistant Referee.

The general consensus appears to be that the VAR is here, and it is here to stay.

While controversy has to date followed VAR wherever it has ventured in football, and not just in the A-League, in Round 1 this season the other general consensus seems to be that the VAR, well, it worked.

If there have been problems with its implementation over the weekend, the issue wasn’t that it got decisions wrong – instead, the problem was that the VAR got things too correct, when it adjudged Kosta Barbarouses to be actual mere millimeters offside.

People can complain until the cows come home that VAR doesn’t work and keeps getting things wrong and is ruining the game, but one example they cannot use is the Barbarouses offside.

You don’t get to have it both ways with video technology unfortunately.

If you are going to implement review technology to get the decision right, to overturn the howler, then you have to accept that technology needs to be used to ensure that any contentious or game-changing decision (for example, scoring a goal) is correct.

Ultimately, the offside decisions and penalties awarded for handballs over the weekend, the VAR has got the calls right.

And that is what it is there for.

So as the season goes on, amidst proof that the VAR when implemented correctly can work, rather than focussing on technology in the game and its role in game-deciding adjudications, this season we are going to veer away from yet another form of ref-blaming, and instead choose to talk about the football over any apparent or at least arguable failings of the VAR.

Let’s see how long I can stick to that philosophy!

McGowan gets going
How good is going back to play your old club with your new club and scoring the winning goal?

The journeyman Socceroo (now playing with his twelfth club at Sydney FC) may not have hit the domestic football heights that he would have liked.

Certainly when you are a part of one of the greatest World Cup goals ever scored, after teeing up Tim Cahill against the Netherlands in 2014, you might start to have visions of premier leagues, la ligas, and European football.

Ryan McGowan came back to Australia on the back of departing club side Bradford City, and joining the reigning champion team would have brought with it some pressure, particularly having to step into a role commandeering a strong defence that rarely gives away easy goals.

There is no better way to repay a little bit of faith shown in you than delivering a win, and for that matter being a part of that win by scoring the last-minute winner in your first game and the opening round of the season.

Sydney kicking off their title defence with three points away from home, and your new defender jags a winner after an otherwise solid defensive outing, is exactly the type of outcome that Steve Corica would have yearned for.

McGowan may prove to be a shrewd pick up for the Sky Blues.

Brought in to stop goals, he has already proved adept at adding to the scoresheet as well.

Ball boy to ball player
What a story young Daniel Wilmering could turn out to be.

It will hopefully become a thing of legend that an 11-year old Wilmering was ball boy for the first-ever Western Sydney Wanderers match, and seven years later found himself taking the field for that very same team.

Towards the end of last season, Wilmering came on for the Wanderers in literally the last minute of the game to make his debut off the back of a strong NPL season.

Come Round 1 this year, Wilmering was called into action about 75 minutes earlier than his previous outing, when Tarek Elrich went down with a hamstring strain.

What a stark occurrence, when a player with 275 A-League games under his belt left the field to be replaced by a player with 1-minute’s worth of A-League experience.

This is the kind of stuff that the A-League should be promoting, and promoting heavily.

A young boy who ran the sidelines of a foundation club in its infancy, worked his way up the ranks to be a full-time professional player for the club at the age of 18, that is a story you can sell to anyone and they don’t even have to be interested.

That is what football is about, and hopefully, it is what the A-League will be more and more about as the league matures.

Melbourne chess game at Marvel Stadium
We get that the practicalities of modern professional sport means that wins and result are everything, and will always trump matters of aesthetics.

Coaches are paid to win matches, deliver championships, and create a team that can and will always contend or, at the very least compete.

So it made perfect sense that for Round 1 this season, for the first Melbourne derby of the season, neither of the two new coaches wanted to lose their first game.

Marco Kurz, the fiery German who had crafted a strong and energetic season with Adelaide United last season, was now in the hottest coaching seat in Australian football with Melbourne Victory, taking over from the forever loved but dearly departed Kevin Muscat.

Round 1, Melbourne derby, you want a positive start to your tenure, and in the end, the nil-all draw for both managers means they can go into Round 2 yet to taste defeat.

Of course, as the old saying goes, “nothing ventured, nothing gained,” and that is ultimately the four-word summary that best sums up this contest, with neither team particularly adventurous, thus resulting in limited gains.

Of course, had Elvis Kamsoba held his run a fraction of a second longer, this might have been a different talking point.

But Kamsoba’s near-inch-perfect run is more evidence as to why it was disappointing that both teams weren’t more adventurous with their game plans.

Clearly, there was a game there for the taking, it is just unfortunate neither team was in the mood for such a venture.

Besart brings it
Now be honest here, was there actually any doubt that the big Albanian striker was going to be the first goalscorer in Western United’s history?

Besart Berisha has done one thing, and one thing consistently, in all of his time as an A-League player, and that is score goals.

He has scored a lot of goals.

Presumably, and I am only speculating here, Besart was brought into the Western United fold for his profile as much as his ability to score.

However, after four successful years with the Victory, Besart has returned to Australia with something of a point to prove, after a fairly unsuccessful Japanese stint (6 games, 0 goals).

Despite the large quantity of goals to his name for the Roar and the Victory, he spent the last 12 months goalless, and at age 34, where every game could be your last, Besart might be feeling the pressure to perform, as much as maintain his legacy.

And make no mistake, for the likes of Mark Rudan and Andrew Durante making their debuts for the newly formed club side in their first match against their old club Wellington Phoenix, someone like Besart coming along and scoring a settling goal to take a much-needed lead is just what the doctor ordered.

Western United made some fairly astute signings over the summer, but in Besart in particular, they have a character with star power and goal-scoring prowess.

If he can keep delivering that, United can at least look forward to a solid season.

The first of the United Melbourne derbies could be a cracker. 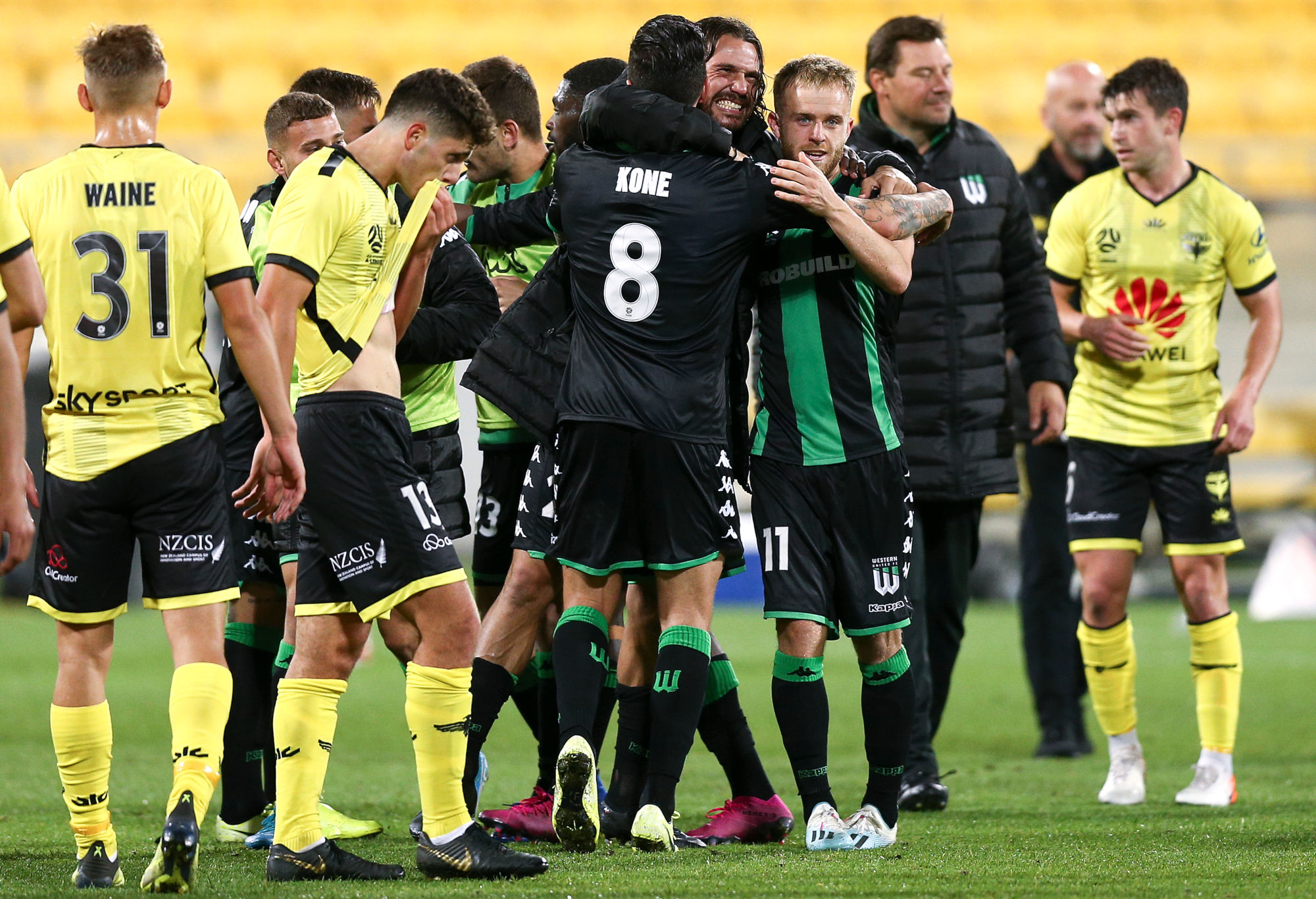 Star power off the field
When you think about it, considering some of the stars that have graced the field in the A-League over the years, amidst the small-ish build-up to this year’s season, it was easy to forget that Robbie Fowler was standing on the sidelines as coach of Brisbane.

In fact, it was a nice moment for the league in general that both Fowler and Tony Popovic were standing on the sidelines, as Perth and Brisbane faced off being coached by two men who have played in both the A-League and the English Premiers League.

Surely that has to be a first.

Robbie brings a lot of interest to the league, to see how he will fare at the reigns of a football team, but his name alone will draw interest in both the Roar and Australian football.

So here is hoping that his stint in Brisbane is a success, and in fact not just for the sake of the league, but perhaps also to return the Roar back to the glory days of those back-to-back championship days.

There was an interesting post by a Brisbane Roar supporters group over the weekend, of the all-time points table for the A-League, from all 14 seasons to date.

Sydney FC and Melbourne Victory, not surprisingly, sit atop the table, respectively first and second with the most competition points in the league’s history.

However, sitting in third is the Roar, a team with three championships to their name.

So all the best to Robbie and the Roar this season, who didn’t have the easiest first up meeting in Perth against the reigning minor premier.

Robbie has his side playing a strong style of football, and here’s hoping that it bears some fruit this season.