Rugby, passion and typhoons: On the ground at the World Cup

The group stages are over and we have had a bit of everything. Massive upsets, one-sided drubbings, refereeing controversies and game cancellations.

But I am not here just to give you a rundown of what you already know. I want to give those of you who were watching from outside Japan a sense of what it was like on the ground during the first three weeks.

I only went to two group games, both of them being when Australia was playing, but I was in just about every pub in Japan chatting to locals and tourists alike about their experiences. And then drinking them – and sometimes myself – under the table.

Japan are taking the first Rugby World Cup in Asia seriously. Not only because it is a massive sporting event that shows off a very proud nation to the world, but also because in a year’s time they will host another even bigger sporting event, the Olympics, and this is somewhat of a test run.

Japan is a strange but extremely loveable country, which is why you most likely have never heard one bad word said about it from your friends that have travelled there, and they are right. For a tourist, Japan is amazing. People – especially in touristy areas – are kind, friendly and helpful and the country itself is beautiful.

It is these people who really add the spark to a sporting event like this and as volunteers, fans and hosts the Japanese are just incredible.

The volunteers at the stadiums were smiling, ready to answer questions and bring the energy you want. They would line up after each game directing the public to transport and high fiving the fans in attendance with glee.

And it wasn’t only the volunteers who were amazing – it was also the Japanese fans. They were in attendance in great numbers at every game, decked out in gear and cheering at the top of their lungs. This is why it has been one of the best attended World Cups to date.

At the Australia vs Wales game, I saw Japanese supporters wearing Welsh and Australian rugby jerseys, shirts, hats, you name it, and it wasn’t all just for show. Talking to some I was delighted to see Japanese rugby fans who had supported the Aussies for decades, decked out in Jerseys from the early 2000s, and with T-shirts and merchandise from long forgotten rugby tours.

Then with some of the supporters who were experiencing their first games of rugby they really bought into the atmosphere. Hugging, screaming and high fiving with every tackle, penalty and try. Some of them will remember this experience for the rest of their lives and have another rugby team to support for life, other than the Brave Blossoms of course. 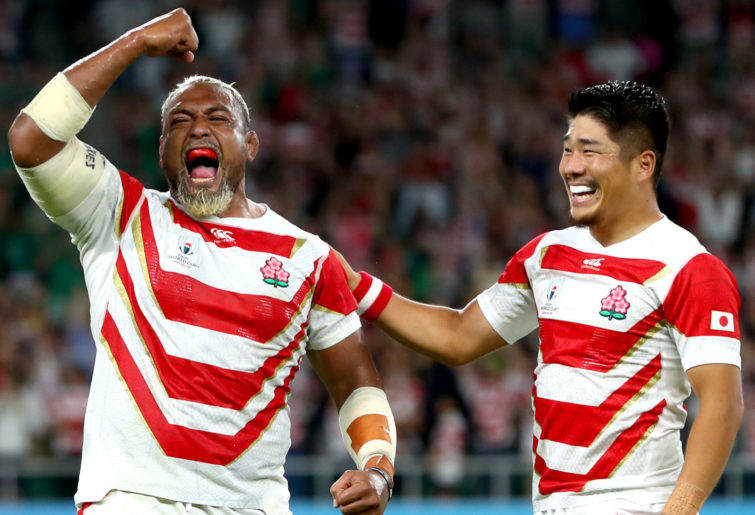 The Japanese people really go the extra mile. An example of this is when I was travelling alone to Ecopa Stadium with a sense of impending doom, worrying about getting there and back from Tokyo before the infamous typhoon hit. As I got on the packed Shinkansen and looked for a seat I saw a group of Japanese beaming up at me and offering me a seat in their group, I refused at first, but they insisted and I thankfully accepted.

From there, even though they didn’t speak much English, we talked about rugby, their lives and the typhoon as we downed beers and strong zeros like they were going out of fashion. They all pulled out a wagon load of Wallabies merch from their bags, most of them going to their first ever game. I tried to teach them all that I know about rugby (which is not much) and really pushed hard to make them true Wallabies fans. I think I got there in the end.

We went into the stadium as a group and I met them immediately afterwards to rush back in the blinding rain and wind to get the very last bullet train to Tokyo. They lead me all the way to make sure I got on.

By this time my phone had been drenched and now did not work. I became worried about how exactly I would get home as Tokyo is massive and the train lines can be downright confusing, particularly in the middle of a typhoon, but my new friends tried to fix my phone, gave me directions on paper and even lead me out of their way to the correct train station and platform. And then, on top of that, they gifted me a bit of Wallabies merch I had been after the whole time I was in Japan just for good measure.

People showing that kind of genuine passion and care made what could have been a very nervous trip down and back from the game into a magical one. So yeah, great job Japan.

These people, as well as foreign fans in attendance of course, made the atmosphere at the grounds and in the pubs fantastic.

Rugby is not a big sport in Japan. Football, baseball and basketball are big, so not everywhere you went had a sense that the World Cup was on. But every person knew it was on, and in the towns and cities hosting games, it was buzzing.

There is nothing like being in a packed pub watching Japan overcome one international rugby side after the next with tourists and Japanese alike jumping for joy – except for the Irish and Scottish.

This just goes to show Japan’s preparation. They had volunteers at stations, outside grounds, extra trains and buses, and information handy for tourists trying to get there. That is not to say that it was entirely easy – Japan can be a confusing place, particularly if you can’t read or speak Japanese. The train stations are massive and in places like Tokyo there are about 50 different train lines, which does make it a bit of a struggle. But once I was on the right path, I was golden.

They had fan zones outside stadiums after games with bars, food and entertainment ready for those waiting for transport. No lines, no worries.

Before the games though it was hard to get merch from the mobbed stands or a beer at the stalls, but once inside, no worries at all.

All this contributed to the experience at games like Australia vs Wales, which was truely something to behold. I had one of the best rugby experiences I have ever had and we bloody lost! How does that even work? 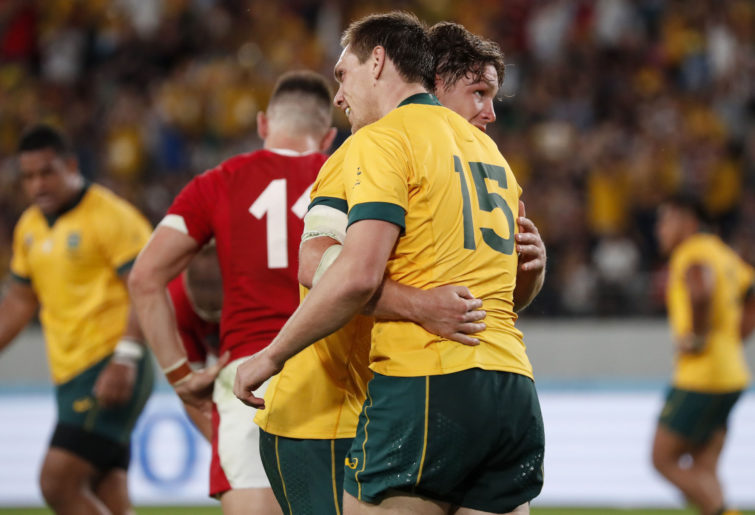 Everyone had a gut full of beer, there was just about no seats spare, everyone was decked in team colours and the chants echoed through the stadium. When was the last time you heard Waltzing Matilda spontaneously break out multiple times across a stadium with full passion? Maybe 2003?

Every tourist I met, either there for the World Cup or not, was having a blast just soaking up the vibes.

With the people and set-up being so good, what really got to me in the last few days was all the talk about the typhoon and cancelled games. Yes, this World Cup was held at a time of year when typhoons can regularly hit Japan, but this is a calculated risk to bring rugby’s showpiece event to a new part of the world to grow the game, and believe me, this is doing wonders for rugby in Japan. But as rugby fans and players, we should know a thing or two about calculated risks.

Also, on a side note, I still can’t believe the Sunwolves were dropped from Super Rugby. Great move SANZAAR. Just when you get an entire nation interested, you drop their team.

Yes, the cancellation of a few games did deny fans the great spectacle of England vs France and the deserved chance for Italy to have a crack at New Zealand and give some of their greatest ever stalwarts the send-off they deserve. And the fans were rightly upset, as I would be, to not see their teams they have travelled so long to see play.

But pointing the finger at World Rugby and Japan is a bit much. Relocating and reorganising games is no mean feat with only a few days notice. Can they be better prepared for these types of situations next time? Sure. Did they do the right thing this time in the path of an impending typhoon? I think so.

A particular shout-out goes out to Scotland on this point. Threatening legal action for a country and organisation just trying to put safety of people over a rugby game is just not on, particularly when they are trying so hard to accommodate fans and teams. The Scots fought gallantly against the Brave Blossoms but they deserved to lose after that hissy fit.

The Japanese rugby team topping the group is just brilliant. You can tell a team’s passion and commitment by their defence and accuracy, and Japan had it in spades. You could see the joy of the Japanese fans in the tears streaming down their faces. It is fitting that their team topped their group as this World Cup has been tops.

The finals are now set and the games look as delicious as a bowl of Japanese ramen. Bring it on! Come on Wallabies (and Japan)! And please, can I go back?

One final point: my heart goes out to Japan as news of those who have died or have been displaced from the effects of Typhoon Hagibis roll in. Please donate to the relief effort.

With the recent unveiling of the 2021 Super Rugby AU draw, many were curious to see that the Waratahs are persisting with their push into Western Sydney with a dogged determination. 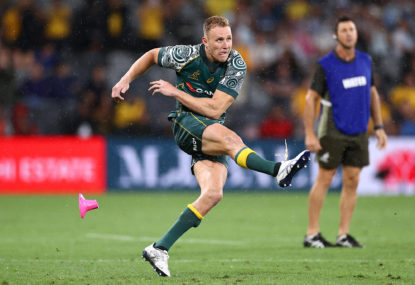