What can past World Cup contests tell us about this weekend's quarter-finals?

The Rugby World Cup enters the quarter-final stages this weekend in a mouth-watering set of fixtures. With all eight sides having met each other in previous World Cup encounters we look back on these meetings before we look ahead to a massive weekend of knockout rugby.

Australia 10-12 England, Quarter-final
6th October 2007, Stade Velodrome, Marseille
In 2007, defending champions England faced the Wallabies in the first knockout match of the tournament. Both sides were filled with experience, with household names such as George Gregan, Jonny Wilkinson and Stirling Mortlock taking the field.

England were able to go up 6-0 on the board in the early stages through the reliable boot of Jonny Wilkinson. It was however the men in gold who scored the first try of the game with winger Lote Tuqiri forcing his way over in the corner from short range to make the half time score 10-6.

The English dominated the scrum in this encounter with 6’5” prop Andrew Sheridan giving the performance of his career to nullify the Australian set-piece. With the Wallabies repeatedly conceding penalties at the scrum England were able to take a lead in the second half through two Wilkinson penalties to send the defending champions into the semi-finals.

These sides have met six times in the Rugby World Cup, both having won three apiece. England will go into this weekend’s match as slight favourites given their strong showing in the group stages but will be wary of this Australian side that were able to knock them out of their own World Cup back in 2015. 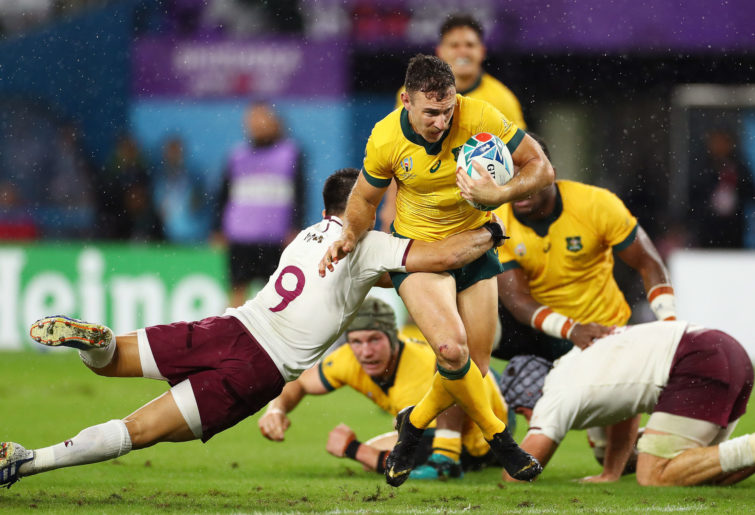 Wales 8-9 France, Semi-final
15th October 2011, Eden Park, Auckland
This was Wales’ first ever showing in a World Cup semi-final. Coming off the back of a win against the Irish, Sam Warburton’s side were confident going into the contest against a French side who had swept aside England in the last-eight.

The men in red dominated the first quarter of the match and led 3-0 through a James Hook penalty with Jonathan Davies and Jamie Roberts looking threatening in the midfield.

The defining moment of the game came in the 17th minute as Welsh captain Sam Warburton made a tip tackle on French winger Vincent Clerc. Referee Alain Rolland deemed this to be a red card and Wales were down to fourteen men for the remaining hour of the match.

Despite the numerical advantage, France were not able to fully capitalise and a brilliant solo try by scrum half Mike Phillips meant the Welsh trailed by only a point on the hour mark with the score 8-9.

Through dogged defence, Les Bleus were able to see out the game and go through to their third World Cup final – leaving the men in red to rue a match that they will have felt they could have won with their full contingent on the field.

Warren Gatland’s side have beaten France in seven out of their last eight meetings and his side go into this weekends game as the favourites. The French however, will fancy their chances having had a two-week rest since their 23-21 win over Tonga in Pool C.

Ireland 19-48 New Zealand, Pool stage
27th May 1995, Ellis Park, Johannesburg
This has been the only meeting between these two sides in the history of the Webb Ellis Cup. The Irish came into the game as huge underdogs having never beaten the All Blacks in their history.

The men in green started the brighter with tighthead prop Gary Halpin crashing over from a quick-tap free-kick to give Ireland a seven-point lead.

As the game wore on the All Blacks proved too powerful for the Irish with the likes of Glen Osbourne, Frank Bunce and Josh Kronfeld running in scores for the eventual tournament runners up. Twenty-year-old winger Jonah Lomu went on to score a brace of tries, his first of seven in the tournament.

This Saturday, Ireland face an equally daunting task against the back-to-back champions who also go into this game off the back of a two-week rest. Joe Schmidt’s side – now without suspended centre Bundi Aki – will need to pull off one of the great Webb Ellis Cup upsets if they are to progress to their first-ever tournament semi-final.

South Africa 32-34 Japan, Pool stage
19th September 2015, Brighton Community Stadium, Brighton
The Springboks entered this Pool B game looking for a bonus-point victory against a Japan side who had but one World Cup victory to their name against Zimbabwe back in 1991.

South Africa utilised their powerful pack to good use in the first half with a rolling maul allowing Francois Louw to go over for the Boks opening try. Ten minutes later the Blossoms scored through a rolling maul of their own with skipper Michael Leech making the breakthrough.

The second half proved to be another display of end to end attacking rugby with South African lock Lood De Jager scoring a fantastic solo try from thirty metres out to extend the Springbok lead. Japan refused to be beaten and fought back to level the scores at 22-22 with an hour gone.

With replacement hooker Adriaan Strauss crashing through to score in the final quarter it looked like the Springboks would break away, but Japan continued to counter and managed to level the match again with a sublime try off a set-piece with just ten minutes remaining.

With minutes left on the clock, Japan won a penalty in front of the South African posts that would earn them a famous draw. Captain Michael Leech elected to take the scrum and go for the win.

In the last play of the game, Japan built phase after phase on the Springbok five-metre line before going wide to Karne Hesketh to score in the corner and seal the win for Japan in the greatest upset in rugby history.

This Sunday, the Blossoms will again face South Africa in their first-ever World Cup quarter-final. After group match wins over Ireland and Scotland, many will now believe that the hosts can go on to beat South Africa in yet another Webb Ellis cup upset.