Essendon’s Joe Daniher and Sydney’s Tom Papley will remain at their current clubs in 2020 after no deal was reached to trade them to their desired destinations before the 2019 AFL trade period deadline.

Carlton also failed to complete a transaction for Gold Coast’s Jack Martin, who is uncontracted and will have the option of entering the draft.

However, Gold Coast and also Melbourne will have picks available ahead of Carlton in the preseason draft, leaving the window open for one of them to swoop on Martin.

In the deals that did get done, the biggest name was Brad Hill, traded to St Kilda along with a future third-round pick for picks 10 and 58 this year, Blake Acres, and St Kilda’s 2020 picks in the second and fourth rounds. 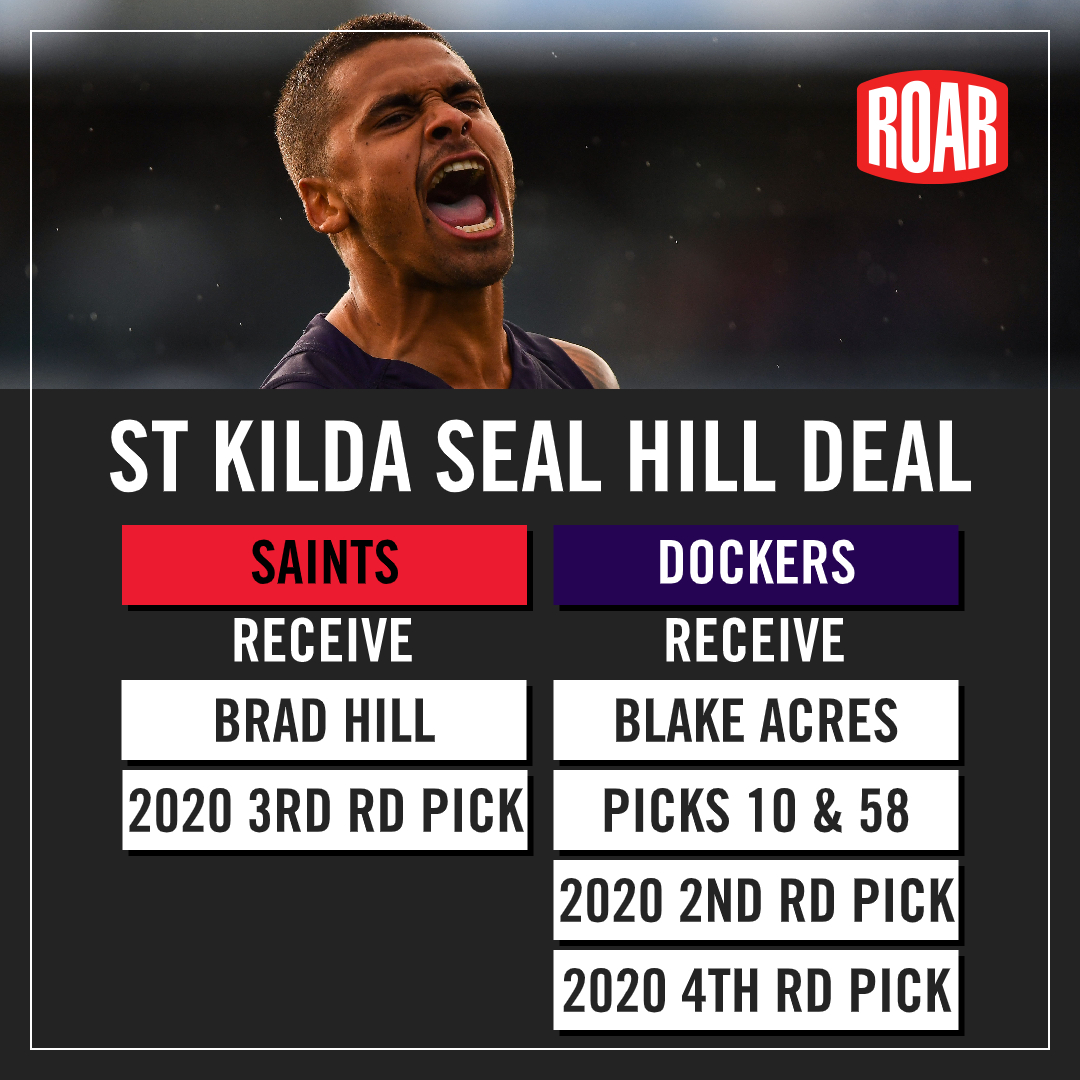 A significant deal, and Fremantle later used those two future picks from the Saints to secure James Aish, also receiving a future third back from Collingwood in the deal.

St Kilda also managed to secure deals for Zak Jones and Dan Butler, giving up pick 56 this year for Butler, and pick 32 and a future third to get Jones and future fourth from Sydney.

To do it the Saints had to move some players out, letting Jack Steven go in a deal that also saw Zac Smith return to Gold Coast in order to get the pick 58 that was part of the Hill trade.

They also sent Josh Bruce to the Western Bulldogs for the pick 32 that got Jones out of Sydney for them, and also pick 51.

The Dogs landed a major coup by acquiring not just Bruce but also Alex Keath without giving up their first-round pick this year, which is pick 13.

The Bulldogs traded a future second and pick 45 this year for Keath and Adelaide’s future third.

Josh Jenkins was able to find a new home, at Geelong, where he’ll partner Tom Hawkins. The Crows sent Jenkins and their future third to Geelong for pick 37 this year.

Brisbane let Lewis Taylor and Tom Cutler get their wishes to go to Sydney and Essendon respectively, getting pick 48 for the former, and Essendon’s future third for the latter, as well as downgrading 64 to 72 this year.

The Lions also managed to complete their transaction for Gold Coast’s Callum Ah Chee, giving up their future second and fourth-round picks to get him on the books.

North Melbourne landed GWS midfielder Aiden Bonar for a cheap price, sending their 2020 third-round pick to GWS for Bonar and Melbourne’s 2020 fourth-round pick, which had circuitously arrived at GWS via the Sam Frost and Jon Patton trades.

North now have even more incentive to see the Demons struggle next year, holding their future picks in the first and fourth rounds. 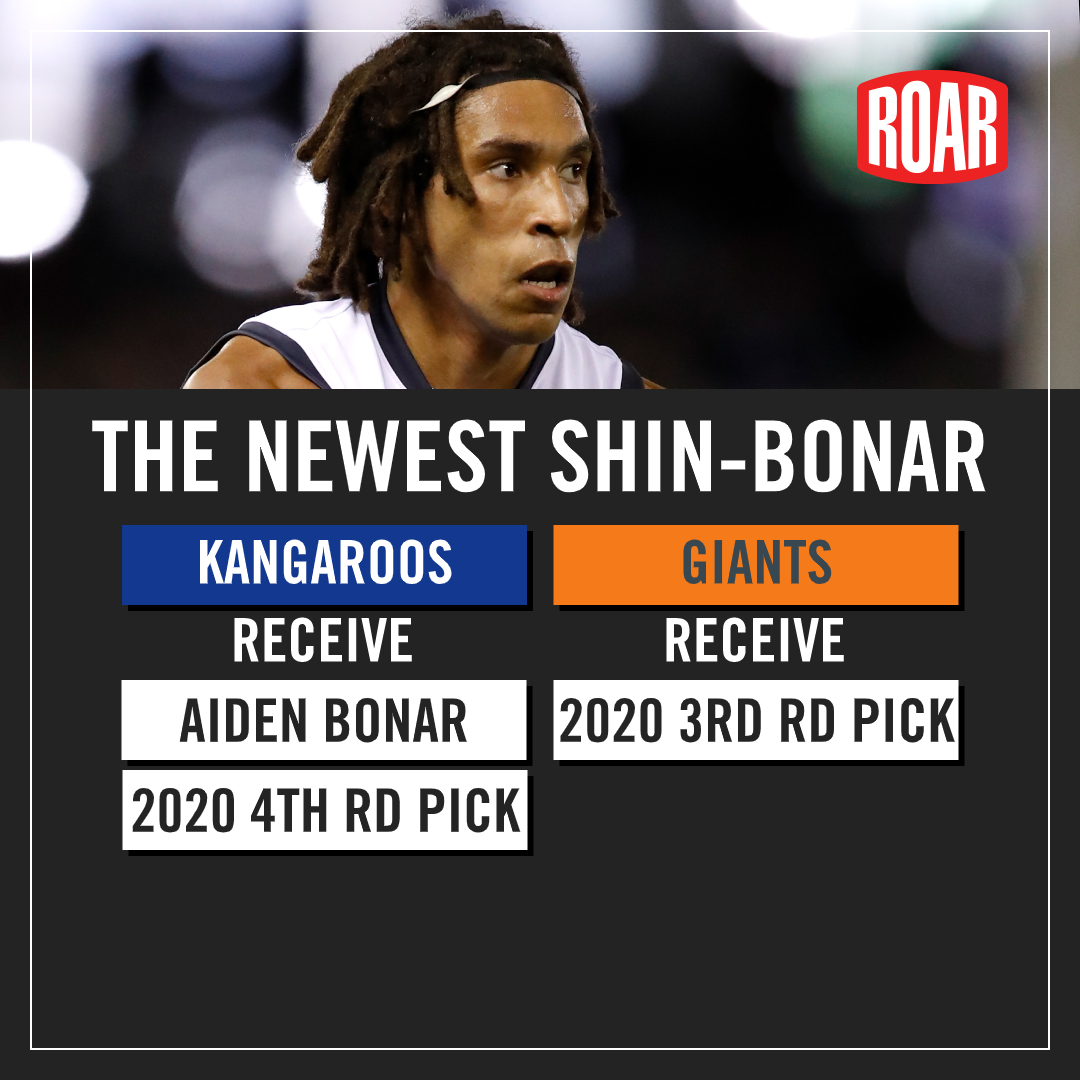 Carlton did a pick swap with Sydney early in the afternoon that set up deals to bring Marc Pittonet to the Blues, and then Andrew Phillips on to Essendon.

However despite reportedly being offered a swap of pick 15 and Jack Martin for pick 9, Carlton were unable to come to an agreement with the Gold Coast, nor with Sydney for Tom Papley’s services.

They now face a nervous wait to see if they can secure Martin in the draft, and know that they won’t see Papley in their colours for at least another 12 months.

As for Joe Daniher, reports came through about half an hour before the deadline that Sydney and Essendon had ceased negotiations after being unable to agree on a deal.

This proved true, and Daniher will remain contracted to Essendon for the 2020 season, after which he will become a restricted free agent.