Mitch Marsh will miss the first Test against Pakistan after breaking his hand, opening the door for fellow Western Australia all-rounder Marcus Stoinis to come into Test contention.

With Marnus Labuschagne offering a good fifth bowling option, Australia do not need a batting all-rounder who bowls pace like Stoinis or Marsh.

Yet the Australian selectors long have favoured picking this style of player and, with Marsh injured, Stoinis is the only realistic option should they decide to go down this route once more.

As Stoinis’ ODI form has nosedived, he has been impressive for Western Australia in the Shield over the past 12 months.

In five Shield matches in that time he’s made 416 runs at 46, to go with 11 wickets at 27. Stoinis has showed nice consistency with the bat, registering five half centuries from nine innings over that period. 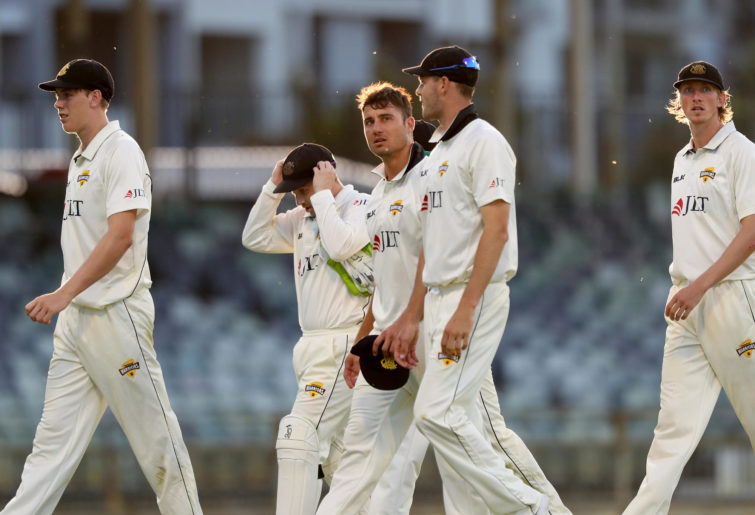 The demise of the Sheffield Shield is hurting all of Australian cricket. (AAP Image/Richard Wainwright)

That includes a double of 61 and 57 in the opening round of the Sheffield Shield this past week against Tasmania in Perth. On the opening day of that match Western Australia were in trouble at 4-99 when Stoinis steadied their innings and helped guide them towards a solid total.

As Stoinis came to the crease in the second innings, Mitch Marsh’s anger at just having been dismissed prompted him to punch a wall, which fractured his hand.

This injury is expected to see him miss the start of Australia’s home Test season, cricket.com.au reported yesterday.

Having averaged 10 with the bat and 59 with the ball in his previous six Tests, Marsh was very fortunate to be brought back into the team at the expense of Travis Head, who had averaged 43 with the bat in his 12 Tests.

The middle order spot vacated by Marsh will be hotly contested. Labuschagne, Steve Smith and Matt Wade seem to have sewn up three of the four spots in the Test order between first drop and six. Claiming Marsh’s spot, then, looms as a battle between Head, Will Pucovski, Kurtis Patterson and perhaps Stoinis.

Pucovski continued his amazing start to his first-class career by cracking 123 for Victoria this past week, albeit on a road at the Junction Oval, while Head made 51 in the same match.

Patterson, meanwhile, missed that round with a quad injury but will return for NSW against Tasmania. The left hander was unlucky to be omitted from Australia’s Ashes squad after his brilliant Test debut last summer.

Patterson made 30 and 114* in his two knocks against Sri Lanka but was squeezed out of Australia’s Ashes line-up by Wade, who was rewarded for his scorching touch across all formats.

The 26-year-old remains a very good middle order option in Tests. Any of Patterson, Head or Pucovski shape as attractive picks to replace Marsh for the Tests against Pakistan.

They’ll now engage in a shootout in the Shield, round two of which kicks off on Friday. NSW play Tasmania, Queensland host South Australia at the Gabba, and Victoria travel to the WACA to face WA.

While Patterson, Head and Pucovski should be the three clear-cut options to take Marsh’s place, don’t be surprised if Stoinis leapfrogs all of them if his fine form continues.

The Australian selectors struggle to resist the siren song of the all-rounder.