Typhoon Hagibis has come and gone, leaving a trail of devastation in its wake across the length and breadth of the Japanese mainland. Rugby events seem trivial in contrast, even competitions as big as the World Cup.

The impact of the typhoon will be felt long after the storm has dissipated, both off the rugby field and on it. Three of the final-round group games were cancelled – England versus France, New Zealand against Italy, and Namibia versus Canada – with the game between Scotland and Japan only staged after a veiled threat of legal action by the Scottish Rugby Union.

The ominous cloud of continuing, torrential rainfall still hangs over the knockout stages of the tournament. In such circumstances, the range of game-planning tends to contract dramatically. Gone are the visions of multi-phase rugby, washed away as quickly as the levées along the Chikuma River.

Suddenly the focus on the set-piece sharpens up, and the processes of winning and securing the ball become all-important.

Australia are doing surprisingly well on this front. A surprise maybe, for those who do not follow trends in the game so keenly; much more predictable for those who foresaw the Australian forwards gelling nicely in time for the beginning of the World Cup.

In particular, the Wallaby lineout has proved to be one of the most successful departments of the team – despite the presence of both David Pocock and Michael Hooper in the back row.

The basic stats tell the following story, from the three most rigorous set-piece tests of the pool stages against Wales, Fiji and Georgia:

The Wallabies have won a massive 96 per cent of their own throw, and 86 per cent of that ball has been cleanly won possession that can be used constructively on the next phase. Australia have only lost two of their own throws, and one of those was to a not straight call when a greasy pill slipped out of Tolu Latu’s hands in the rain against Georgia.

On the other side of the slate, Georgia, Wales and Fiji won only 69 per cent of their throw against the Wallabies, and they took a further cut to 52 per cent in terms of positive, usable ball.

On Australia’s throw, the ball has been spread around among a number of targets by virtue of excellent calling from Izack Rodda:

Rodda is not a selfish lineout captain and calls to himself on relatively few occasions. The main targets have been Rory Arnold and Isi Naisarani, with a handy outlet provided by captain Hooper, and excellent support off the bench from the likes of Lukhan Salakaia-Loto, and either Adam Coleman or Rob Simmons.

The combination of Rodda and Arnold in the second row has proved to be excellent value at lineout time, and a worthy successor to the likes of Nathan Sharpe and Dan Vickerman, and John Eales David Giffin in preceding generations. It has set a rock-like platform for the lineout drives which were so successful against Fiji, in particular.

The impact of the duo has, if anything, been even more significant on the opposition throw. The Wallabies have made no bones about their desire to get both of their second-rowers up into the air, and their aggression in this area has paid out big dividends:

With only 25 minutes of the game up on the clock, Wales were forced to give up throwing to the tail of the lineout and take ball exclusively from the front half of the set-piece.

The Welsh hooker Ken Owens had to be very accurate to get the ball over the top of the 6’10″ Arnold at the front, and into the small window where the Welsh receiver would enjoy an advantage over Rodda at the back.

The Wallabies in these two examples are competing with two pods of six forwards in total (three on Arnold, three on Rodda), fully committed to jumping and lifting against the throw: 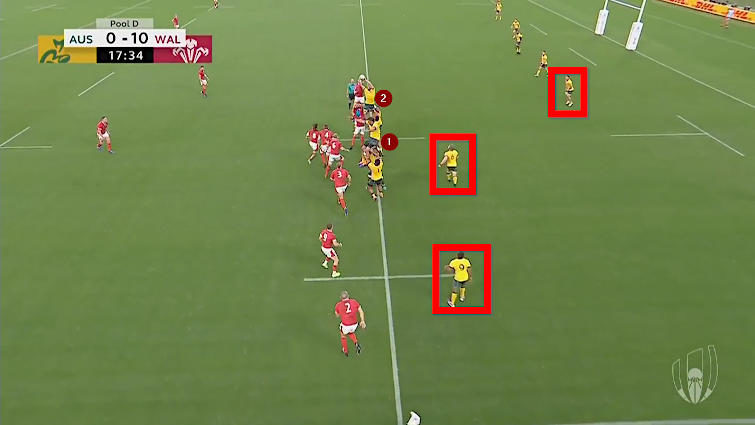 The lineout tends to become quite compressed as a result, with the nearby defenders not involved in the contest (David Pocock, Will Genia and Hooper in the red boxes) having to do a lot of work to cover the gaps in and around it.

The bonuses of an aggressive competition at lineout time can nonetheless be too good to pass up. Wales, Fiji and Georgia were all forced to take ball from the front in order to avoid the threat of Rodda at the tail, and one example from the Fiji game illustrated the drawbacks of that policy:

The Fiji number 9 cannot get the ball away from the base at the first attempt because he is so far away from his flyhalf, and it take two more passes under pressure to move the ball into a decent position for an exit clearance. By the time the kick is made, the punter (outside-half Ben Volavola) is all the way back on his own five-metre line: 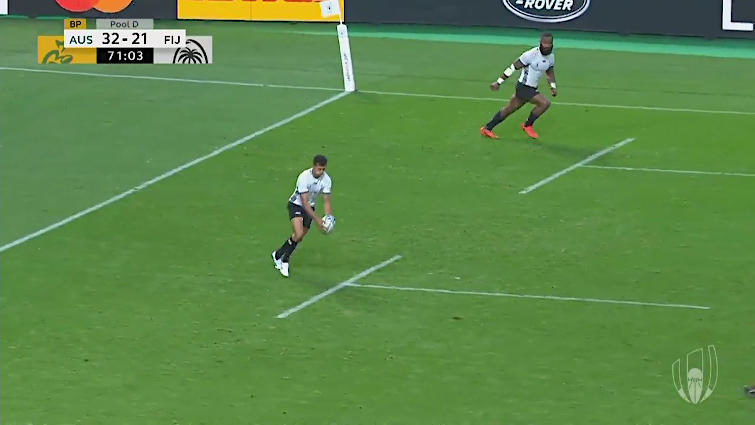 The territorial pressure on Fiji does not slacken, even after the kick finds touch.

The drawback is that some issues can arise with the compression of the lineout, with six forwards all committed to jumping and boosting rather than defending:

On this occasion, Owens gets the ball beyond Rodda, and well beyond the 15-metre line, for a clean take by Justin Tipuric. Josh Navidi drags Pocock away from his ‘tail-gunner’ post, and when the switch is made to George North, it is none other than Rodda who finds himself trying to make the first tackle on the big Welsh winger, moments after jumping in the lineout. Wales progress all the way to the Australian goal-line, establishing the position for their first try.

The game against Fiji saw even more of these issues bobbing up to the surface. First Fiji probed the zone around the back of the lineout, like Wales:

There are a couple fakes to pull the Wallabies pods into the air, and when the throw goes right over the top to Volavola, it is prop Allan Alaalatoa who has to break off from his lift on Rodda to try and make a tackle on Peceli Yato. He doesn’t manage it: 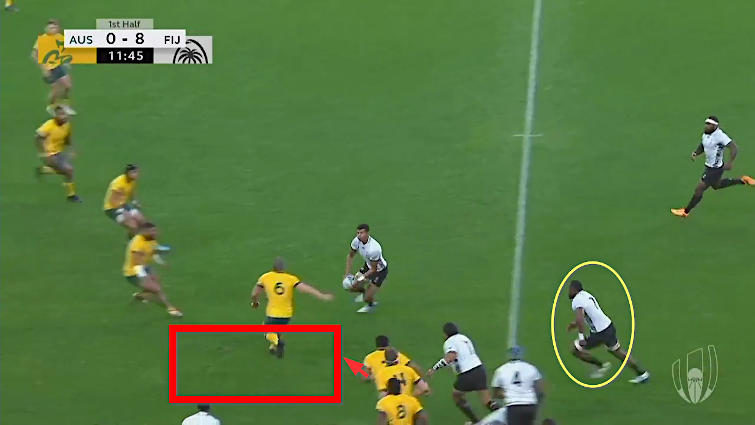 Fiji also identified the area in the tramlines as a potential target for attack:

Again, Fiji put up two fake jumps in the line. With Scott Sio committed early to lifting Arnold at the front, and Nic White over-reading the play to the openside, there is room for Yato to weave his way through near touch: 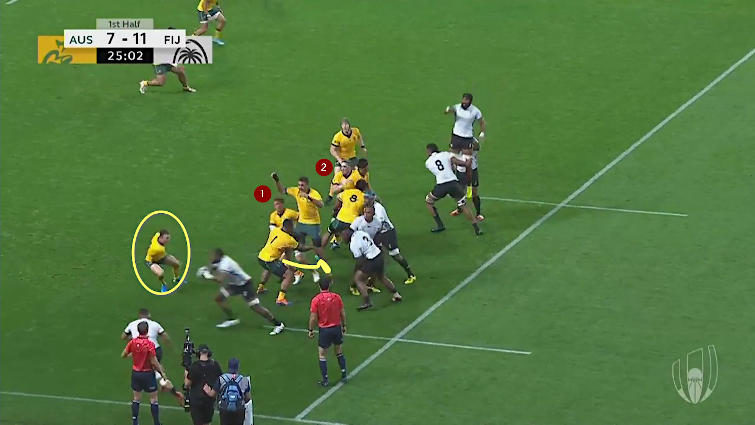 David Pocock was much too wise a head to allow a similar recurrence in the second half:

Both Pocock and Nic White spot Fijian scrumhalf Frank Lomani surreptitiously sneaking up to the front for a repeat play, and the Wallaby number 6 absolutely drills Lomani just as he receives the ball. Turnover Wallabies.

Summary
Some loud media voices have claimed the inclusion of Michael Hooper and David Pocock in the same back row makes the chances of constructing a winning Wallabies lineout impossible. They are wrong, and are being proved wrong again at this World Cup.

Looking below the surface, there are some solid reasons for the success of the current Australian lineout in Japan. The coaches have settled on their best second-row combination (Rory Arnold and Izack Rodda) and supported it with a genuine jumping number 8 in Isi Naisarani. Michael Hooper provides a useful fourth option to keep the defence honest.

It is a balanced and sensible selection, especially at a time when more and more top sides are subtracting extra lineout options from their forward units in the interests of providing more impact around the field, away from the set-piece.

New Zealand have done it by picking Ardie Savea and Sam Cane in the same run-on side, now England have followed suit by selecting Sam Underhill and Tom Curry alongside Billy Vunipola in their starting back row.

If England stick to their guns for the quarter-final against Michael Cheika’s Wallabies, they will go in with only two primary receivers – Maro Itoje and George Kruis – with some additional support from Curry. There is little doubt that in such circumstances, Arnold and Rodda will have an almighty crack at the England lineout.

If it is one thing that Eddie Jones’ England hates to do, it is to play the game in their own end, and under constant territorial pressure. Arnold and Rodda have the ability to make them do just that.

At the same time, the Wallabies will have to develop improved defensive strategies to avoid giving up breaks in and around the set-piece, so the scene for battle has been set.

The positives for Australia are mounting up as the day of reckoning approaches, and the pressure on England increases. There is a momentous quarter-final in prospect, and the Wallabies have a very real shot at winning it.

There will be no tomorrows for the losing coach, whether it is Eddie Jones or Michael Cheika. One of them will be washed away in the typhoon’s backwash, 80-90 minutes of action will make one of them, all of a sudden, yesterday’s man.