A personal history of modern rugby: The game (Part 1)

Were you at Lansdowne Road or Chicago to see Ireland beat the All Blacks?

I was at both, and I shall be in Japan at the weekend to see it happen again. I also belong to a select elite group of about a million Irishmen who was present not only for the Dublin and US victories but also watched the Irish provincial side Munster beating the All Blacks in 1978 at Thormond Park – a dark day for the Kiwis after which All Black great Stu Wilson is reported to have said, “We were lucky to get nil!”

And now we get to beat them again in the World Cup.

How the game has changed since I started to follow the Irish back in the 1970s. We never had a truly great team then. Individual stars, yes, and no shortage of heart but never the well-oiled machine that Joe Schmidt has built in the recent years.

Wales back then – with its surfeit of talented Williamses – were our usual nemesis and I have disliked them since. It seems to be Joneses nowadays – maybe it’s a class thing, I wouldn’t know. Studying Welsh culture is not a priority for me.

We can divide recent rugby history along the lines of Egyptian dynasties, into old, intermediate and new periods.

The old period
Before stadium screens and video replays there was a time of soggy pitches, slippery balls and – heaven forbid – amateurs until 1995.

Back in the ’70s and ’80s, rugby was a tougher game than it is now. The players may have been smaller but there was no video referee to police off-the-ball incidents and if a man wanted to take a swing at an opponent who had wronged him, well, that was considered manly.

Each international side had at least one hard man – a renowned dirty player, and the more renowned the better – whose main function was to intimidate and, if necessary, hurt opposition players on the grounds that players would become anxious and make errors.

The opposition, on the other hand, were programmed to be their own video referee so that if and when Mr Badman did his thing and especially if he did it to a fleet-footed back, retaliation would be immediate and violent. Thus, good players dropped the ball and fights quickly went critical with everyone getting involved.

More often than not, Mr Badman would sustain an injury at some point during the game proportionate to the injury he himself had inflicted on others and the whole thing had a nice old testament feel to it. 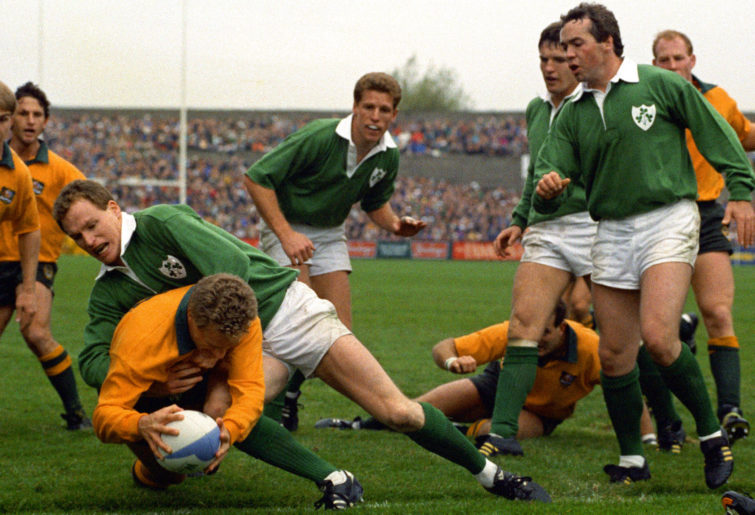 International teams sometimes developed their own intimidation speciality. The French were ear-biters, the Kiwis eye-gougers – yes you, Richard Loe – and the South Africans frequently mistook a head for the ball when rucking.

The intermediate period
The video replay had arrived, but the video referee had not.

This brings us to the infamous moment in 2005 when Tana Umaga tried using the head of the blessed Brian O’Driscoll as a post hole digger during the first Test of the Lions tour. This is a moment that no doubt the current Irish will replay in their heads privately and collectively to get themselves fired up on Saturday. The referee did nothing.

However, player retaliation was no longer acceptable, and Tana finished the game unharmed. This would not have happened in ’80s when Tana would have been anatomically rearranged at some stage of the proceedings. He seemingly told the ref that rugby’s not tiddlywinks, but it sort of was. He was alive and playing at the end of the game when he should have been in hospital with Saintly Brian.

By the way, if anyone knows Pope Francis – who grew up in a good rugby playing suburb of Buenos Aires – they should have him review the life of Brian so that he can be quickly beatified on his demise. I understand performing a miracle is a prerequisite to becoming a saint and BOD performed many.

The video ref is not going to go away so it is what it is, and not what it used to be. We live in an era of digital surveillance and slo-mo replays and sporting spectacles are changed for ever.

Imagine, though, how it would have been if the Romans had TMOs at the Coliseum, “Er, Nigel, I think Red 12 may have used the Trident illegally on Blue 11 and I’d like to take a look at it again”.

“Yes, I can see that. Blue 11 was swinging his sword trying to decapitate red, so that’s okay, then red feints with his net and then he went in too low with the trident stabbing blue in the foot. Clearly foul play. Red card. Everyone agree?”

“Thanks ref!” says the not unhappy red.

The trident and net man or Retiarius, by the way, was expected to lose – a bit like Italy versus New Zealand.

And finally, a word to those internet pundits so concerned with player safety that they are happy to have good contests wrecked by the red card. I agree with you, but the TMO doesn’t help at the amateur level where so many head injuries occur.

Maybe we should just give up on the whole rugby thing as being too hard, be good and nice to one another and get to heaven where apparently the game is very popular and head injuries are unlikely to be of much consequence.

Wonder if Tana will be there?