You are not required to back the Blossoms. The Boks are brave, too

You don’t have to support Japan against the Springboks.

You can. Do what you want. Support the Brave Blossoms to beat the brutal Boks. Many of you will, caught up in the magic of the new, the brightness of the Blossoms’ positive playing style, the classic David-Goliath archetype, and the size differential. But I want to give you a few reasons to back the Boks to banish Brighton.

Little Herschel Jantjies is five foot five. A foot and a half shorter than RG Snyman. But he was always a star. At 15, he was the man for Western Province, then a Currie Cup starter as a teenager. He cracked the Stormers’ line-up in the very last match of 2018, and then stormed into the Boks, famously forcing a draw at the death in the Cake Tin against the All Mighty Blacks. He is the Bok bolter.

Faf de Klerk and Cheslin Kolbe will be starting against Japan, and may actually look up to their opponents. Find two more likable players in world rugby than the hyperactive Faf and the ankle-breaking Kolbe.

Speaking of nice, these Springboks are not your father’s Bokke. Yes, they go into contact hard. But none of the eight front-rowers from South Africa have been carded – ever – in their international careers. Steven Kitshoff might hurt you, but legally. Even if Malcolm Marx looks like a bouncer, and Frans Malherbe a mad farmer in a horror film, and Tendai Mtawarira a beastly nightmare of a foe, none of them have a card, nor a reputation for fighting, or foul play. They tackle in the right framework and avoid niggle.

The Beast is a Shona strongman with a soft, and irregular heart. He attended the poshest Zimbabwean schools (Churchill and Peterhouse) on scholarships, and is the only foreign-born Bok. The successor to Os du Randt, with a mountain of caps and hard-earned scrum craft. He was a reluctant prop, having come up as a ‘small’ loose forward. His real name means “Be Thankful to God.” He is.

As for the four second-rowers, Lood de Jager might be the funniest, goofiest player at the Rugby World Cup. Once he fought Eben Etzebeth in a Newlands derby and it was called on account of laughter. Pieter-Steph du Toit is all effort and a big load, but has he ever even joined a scuffle? Franco Mostert doesn’t have the energy after hitting 50 rucks to posture as a fighter, which he’s not.

RG Snyman does love the handbags, let’s be honest. He is the Houtkapper, or the Lumberjack, as Brodie Retallick can attest. Six foot 11 barefoot, with a mane of straggly hair, and a constant smile while he batters opponents, Snyman is also amazingly quick for his size, and has completed five offloads in limited time in this Cup. You won’t see many more skillful big men than RG, and when in space, look out!

OK. Let’s talk about the elephant in the room. Eighty-cap Etzebeth is one of the strongest, most imposing players in world rugby. 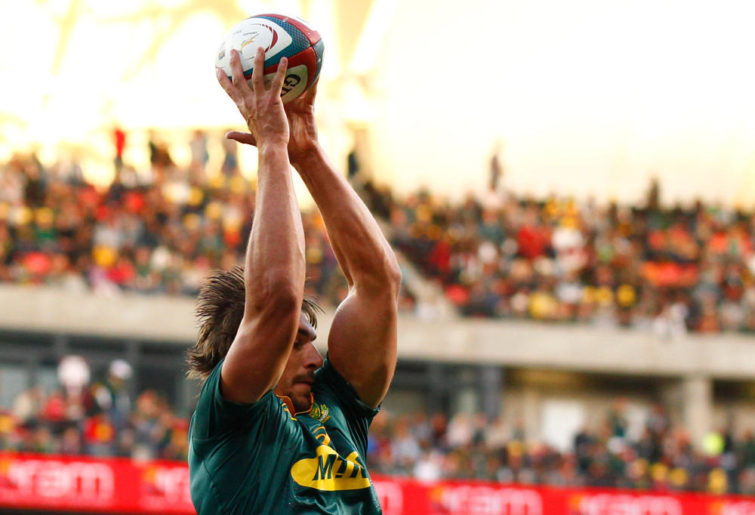 Genetically a freak, from a family that boasts street enforcers, bill collectors, police, a world wrestling champion, and a few top rugby players, Eben is the mildest, nicest guy in his family. But that’s like saying he’s the nicest Peaky Blinder. He played centre in high school at Tygerberg, not a top rugby factory like Paul Roos or Paarl Gim, which can be seen when he gets in space.

He has a cloud over his head from an altercation in the wee hours at a resort town: to protect family and friends, he has kept silent, and maybe he shouldn’t, but in a way, he has more to play for than anyone. He is playing for his reputation, the name of his family, and as the best friend of Siya Kolisi, the first true Bok captain of colour, he has everything riding on this: his choice not to take the money in France years ago, recovery from a half-dozen ‘career-ending’ injuries, coming back stronger every time, and giving it all every match.

As for the loosies, the only bully who will be bigger than his opposite is Duane Vermeulen, or Thor for his passing resemblance to Chris Hemsworth and formidable toughness on the pitch. He was raised in a small town on the Low Veld, near Mozambique. His school was just Nelspruit High School, not a household name in South African rugby. He started at the lowly Pumas, and then joined Rassie Erasmus at the Cheetahs, before following him to WP.

He was only capped at age 26 and has spent time abroad. Thus, he has 30 fewer caps than Etzebeth, despite being six years senior. Whilst he looks like the quintessential Afrikaner hard man, and can get under any opposing team’s skin, Thor is an affable guy off the field, in the tradition of his good mate Schalk Burger. The rest of the loose forwards are as amiable as any in the Cup. 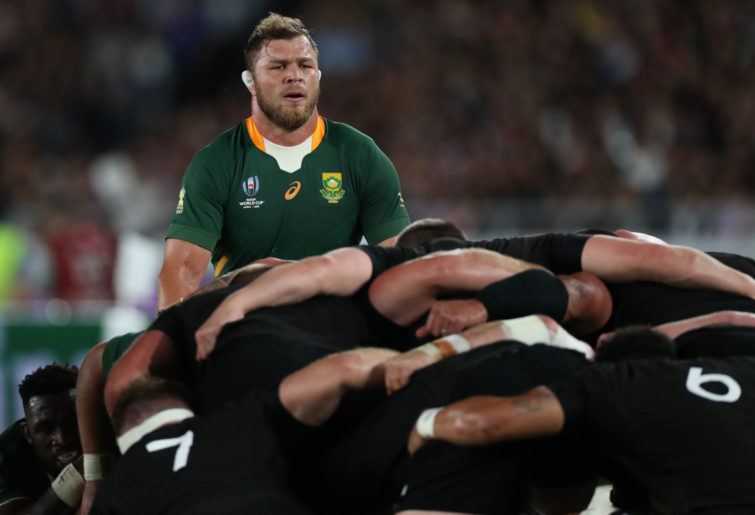 But what about the exciting style of Japan? Well, the Boks have scored 14 more tries than Japan in the tournament, made 21 more line breaks, and completed nine more offloads. Speed? Consider the Bok backs.

In the back line, Lukhanyo Am is from the Xhosa heartland in the Eastern Cape. He is a clever footballer, who has won seven turnovers for the Boks in 2019. His midfield partner, Damian de Allende, is always laughing off the pitch, and competes with Willie le Roux as a happy, eat-anything, try-it-all cosmopolitan traveler. By the way, Le Roux has more cards than any current Bok forward except Etzebeth.

Yes, Handré Pollard, Cobus Reinach, and Frans Steyn were always going to play pro rugby, having starred at Paarl Gim and Grey College, and coming from Saffa rugby royal bloodlines, but no matter who gets the nod on the wing opposite Kolbe, if it is Makazole Mapimpi or Sbu Nkosi, you are looking at a first generation hero who had unbelievable obstacles to hurdle at home, in their communities, and in the streets.

Consider supporting the Boks for many reasons: history, brotherhood, progress, rainbows, or self interest.

But if you see black Bongi linking arms with ginger Kitshoff, backed by man mountain Snyman, and Captain Kolisi flanking them, tiny Herschel shouting directions to the once golden boy of Bok rugby Frans Steyn and the current golden boy Pollard, the back line organised by Am, and steered by Stellenbosch man Le Roux, and the joy of Xhosa, Zulu, Afrikaner, English, mixed up and confusing and everything in between celebrating yet another trip to the semi-finals to take on a Home Nation, remember it is okay to support these Boks.

The London journalists are eager to cast the South Africans as the villains, but you can give a little love to the men from the southern tip of Africa, who made the journey their forefathers did not, could not, or would not: to be a brotherhood across the bloody rivers and townships and memories of yesteryear, and bring that fighting spirit, but this time, together.