Can Japan repeat the Brighton Miracle at the 2019 Rugby World Cup?

Typhoon Hagibis has passed through and over the Japanese mainland, leaving a trail of havoc in its wake.

As the Japanese people go about the grim business of picking up the bits and pieces of their ordinary lives, trying to make sense of them once more, another extraordinary meteorological possibility has taken its place at the Rugby World Cup.

Can lightning strike twice? Roll the clock all the way back to September 19, 2015, at the Brighton Community Stadium on the south coast of merry old England. The vast majority of pundits gave Eddie Jones’ Japan a snowball’s chance in hell of beating the mighty Springboks in their World Cup pool game.

The repercussions of Japan’s last-gasp 34-32 victory were far-reaching, seismic ripples in the international game.

The Brave Blossoms twice refused penalties beyond the 80-minute mark which would have earned them an honourable draw. They went for the try and the win, and they got it. Courage in the face of outrageous odds was rewarded, in the same way that the selfless determination of ordinary Japanese people to do the work needed to stage the group match against Scotland has been rewarded, four years later.

The current tournament has proven beyond any shred of doubt, Japan’s right to sit at the top table of international rugby. The national team has beaten Ireland and Scotland in the pool stage, while the country’s economic strength may yet prove to be the mainstay of some future version of Super Rugby. All roads, it appears, are leading towards Tokyo.

In terms of the rugby, much of the charm of the Japanese game derives from a biblical David versus Goliath narrative. Physically, Japan is David, much smaller than its top-tier opponents and getting by through its smarts and its skills.

In the forwards, it has had to turn to a mix of Pacific islanders and converts from New Zealand and South Africa to bolster its stock. The biggest forward is 38-year-old Luke Thompson, and he is one of the smallest such players in the competition at 1.96 metres and 108 kilos.

He and his second-row partner, James Moore, will be giving up approximately nine centimetres in height and over 15 kilos in weight to their opponents on Sunday, Eben Etzebeth and Lood de Jager. They are far smaller even than the Springbok no.7, Pieter-Steph du Toit.

The lack of sheer physical size has forced Japan to play the game inside-out, or maybe back to front. Instead of following conventional wisdom, which insists that the right play wide on attack has to be first ‘earned’ by collisions won by the big men, they use threat in the wide channels to open up space in the middle of the field.

It was this revolutionary thinking by coach Brian Ashton which helped England to improve their attacking game in time for the 2003 World Cup. Ashton had a training drill, in which all of the England attackers had to stand with their backs to the opposition, who were lined up randomly. At a command, they all turned around as one while Ashton shouted: “attack the space”. More examples of Brian’s philosophy can be found here.

Ashton’s England teams kept their width on attack and forced defences to overextend in their efforts to contain that width. Now Japan are doing something similar in 2019, and there were some outstanding examples of their playing policy at work against Scotland.

Japan start by establishing the threat of their wide attack. Their third try of the first period was a typical instance:

The Brave Blossoms are returning a kick to midfield. After setting that first ruck, a characteristic shape emerges on the following phase: 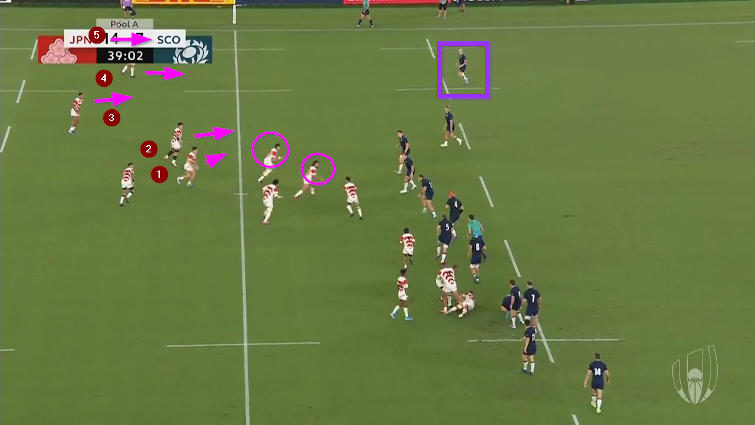 There are only two forwards ahead of the second receiver, not a full pod of three. That extra forward has been subtracted so that he can be added to the numbers out wide.

Scotland are defending in orthodox fashion, with their last defender, winger Darcy Graham, sitting on the far 15-metre line, but even in the screenshot on the second phase, Japan have already engineered a potential five-on-three overlap on that side of the field – one which they convert expertly with a short kick-and-chase.

This is their primary threat on offence: 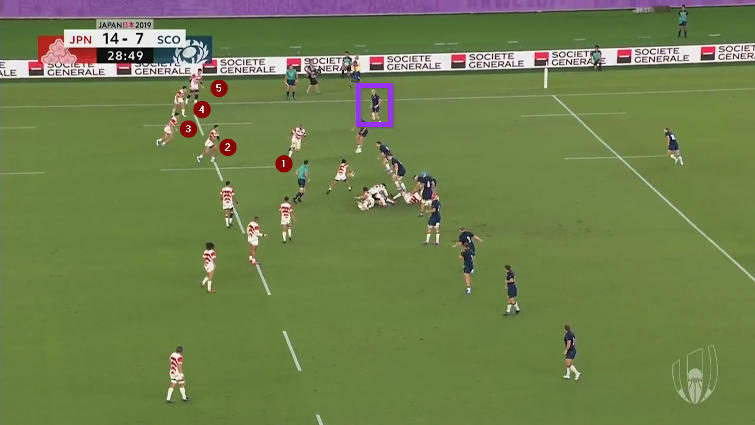 Even operating on a reasonably skinny short-side, there are five Japanese attackers (including two forwards) packed into the left 15-5 metre zone, facing only two Scotland defenders, foremost among whom is the unfortunate Graham with the bleached bob.

Japan’s second try in the 25th minute of the first half, was likewise kickstarted by the threat of immediate width against an edge defender stationed on the 15-metre line:

Again, there are only two forwards ahead of the pass, with an extra body packed into the right 15-5m zone. That forces the edge defender, Tommy Seymour, to back off and make a passive tackle 15 metres further downfield.

This momentum led to the position from which the Brave Blossoms scored their second try one minute later:

The try is engineered by three wonderful offloads right down the pipe towards the posts, finished by loosehead prop Keita Inagaki.

What is really interesting are the adjustments which have been forced in the Scotland defence by the threat of width: 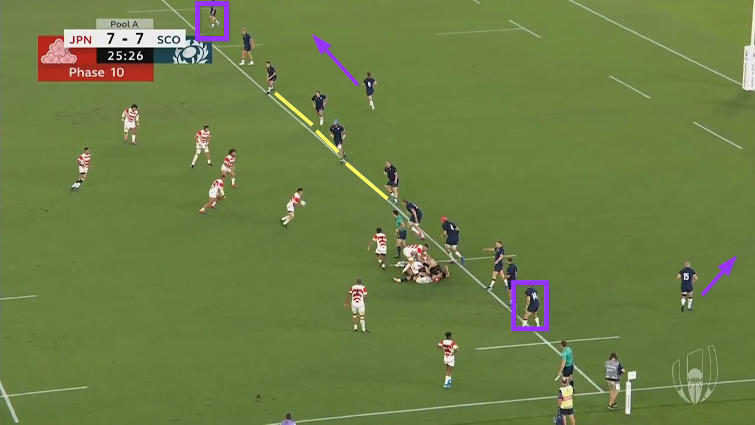 At this point in proceedings, Scotland’s defensive line has become much more widely strung out. Of the two ‘bookends’, Graham is standing in between the far 15- and five-metre lines, while Seymour is stationed on the near five-metre line. This means the Scotland defence has lost its compactness and upfield punch.

In particular, the spacings between the three forwards in midfield (WP Nel, Blade Thompson and Fraser Brown), and centre Sam Johnson outside them, have become uncomfortably large. When Japan advance in this area, they are committed to making one-on-one tackles without any help, and that in turn opens up the potential for the offloading game.

Japan’s first try of the game brought all of these themes into focus over a number of phases:

First, we have the extreme width designed to stretch out the right corner of the defence around Graham.

Second, on the way back from touch there is a second-man play looking to get the point of contact past the spearhead of the rush and into midfield: 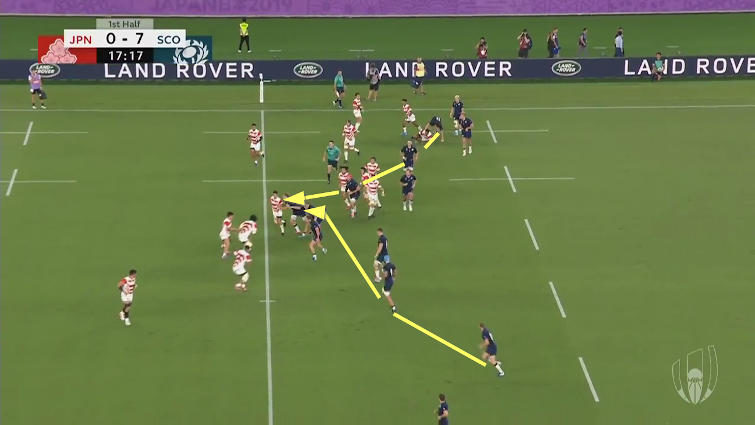 The highest man in the rush (second-rower Johnny Gray) is opposite the first receiver, but the ball has already been transferred outside him to a ball-carrier under less pressure. Little details like this matter to the rhythm and continuity of the offence.

In the final act, Japan again find a way to outnumber their opponents, including Darcy Graham, in the extreme width of the field:

The screenshot at the critical moment shows that, however wide Graham defends, Japan will always strive to maintain the outside man beyond him: 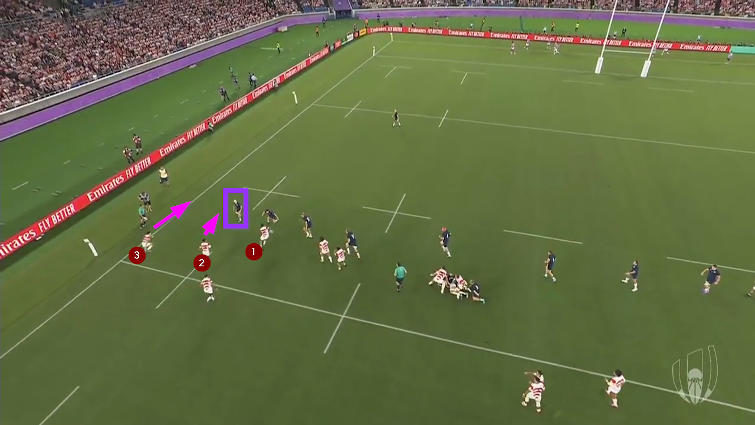 The cut-out pass locates left winger Kenki Fukuoka, and he delivers a magnificent offload to his fellow wingman Kotaro Matsushima, applying the full-stop to a wonderfully lyrical paragraph of attacking play utilising the full width of the field.

Summary
Japan are playing a resolute and even romantic David to the top tier’s Goliaths at the 2019 World Cup. There is nobody bigger than the Springboks, and they will provide the ultimate contrast to their smaller, quicker opponents at the Tokyo Stadium quarter-final this Sunday.

The contrast in playing styles when Japan have the ball in their possession will be even more brutal. The Bokke will play hard and narrow on defence and attempt to cut down the width of the field for the Brave Blossoms’ offence. They know Japan cannot win a game where their ball-carriers are exposed to a regular diet of one-out collisions in the middle of the park.

If Japan can find a way to make their width tell, the likes of Makazole Mapimpi and even Cheslin Kolbe out wide, and the unwieldy South African tight forwards in midfield, may find their lives one long living hell on defence.

Jamie Joseph and Tony Brown have taken on the principles of a Brian Ashton with England and applied them in the Far East. Ashton was one of England’s innovative forward thinkers and he believed in using attacking width to break down opposing defensive structures and open the inside channels.

Likewise, Joseph and Brown will not look to earn the right to go wide. They will pack the wide zones with Brave Blossoms and look to play their hand back to front, earning the right to attack up the middle against single tacklers.

Let’s hope that brains overcome brawn, and that lightning really can strike twice in the same spot. Let’s hope that the emotional momentum gathered from cleaning up the mess caused by Typhoon Hagibis persists, and that the Brave Blossoms triumph – for the sake of rugby, and a nation that has become a rugby people in the space of four short weeks.

Now that really would be a story.