It is time for the rugby codes to reunite

This article will cause some people to immediately react negatively and/or to post less than polite responses, but I’m going ahead anyway.

I’m doing this because there is a need to consider how best for Australia’s two rugby codes to proceed, given the headwinds they face in an evolving sports and entertainment world.

So, I do ask readers to put aside any bias toward one code or the other and consider this; in the longer term, would league and union be domestically stronger and more internationally successful standing alone, or united as one?

In this article, I’ll refer to rugby league as “league” and rugby union as “union”. Where I’m referring to both codes as one combined code, I will refer to a joint or unified code of “rugby” playing under union laws of the game.

In recent time, I have been wondering how strong union would be in Australia if league had not split from union and a single game of rugby existed in Australia.

If the NRL had evolved under the laws of union rather than league, would the Wallabies be a perennial international powerhouse, assuming all of those who have historically played league instead played union and that league did not exist?

What if the National rugby league (NRL) was a union competition playing under union laws and the NRL was an independent body administering union’s national league under the auspices of Rugby Australia?

In 1908, to enable player payments to be made to cover costs and injury compensation, rugby league was born, and several rules were changed to differentiate the game of league from union. Both league and union have evolved to what we have now.

Both codes have significant strengths and weaknesses, but they remain, still, games of rugby.

League has a strong domestic competition (NRL) and state competitions in NSW and Queensland, but the code has not developed internationally to the same extent as union.

NRL is primarily played in NSW, Queensland, PNG, northern England and a little in NZ. While there are smaller competitions in a handful of other countries, the game lags considerably behind union in terms of international presence.

However, union as a code has a strong and growing international presence. The Rugby World Cup in Japan bears witness to the rise of union in such diverse places as Japan, Uruguay and Georgia and along with the USA, Canada, Russia, Fiji, Tonga and Samoa are all closing the gap on the traditional tier one nations.

There are some common issues facing both codes.

Player numbers for both codes have been struggling over recent years with neither code featuring in the top ten sports 2017 Australian Sports Commission’s Ausplay survey (football and AFL are first and third with 1,152,144 and 673,986 respectively).

AFL has in recent times gained the upper hand in terms of finances and continues to grow, in NSW and Queensland.

In a recent article published in The Age and SMH, Roy Masters sighted comments from Australia’s leading expert on sports rights, Global Sport and Media’s Colin Smith with regard to the future broadcasting rights and money:

“With the real and present cautionary future of the AFL that has solidified its base in Sydney with the Swans, its overall financial muscle and long-term thinking building a similar position for western Sydney, Gold Coast and Brisbane, the AFL by 2035-40 could be the national football code. This will push the NRL into a second-rung sport. It is a must for the NRL to have a comprehensive strategy that further strengthens and grows the sport on the eastern seaboard.” 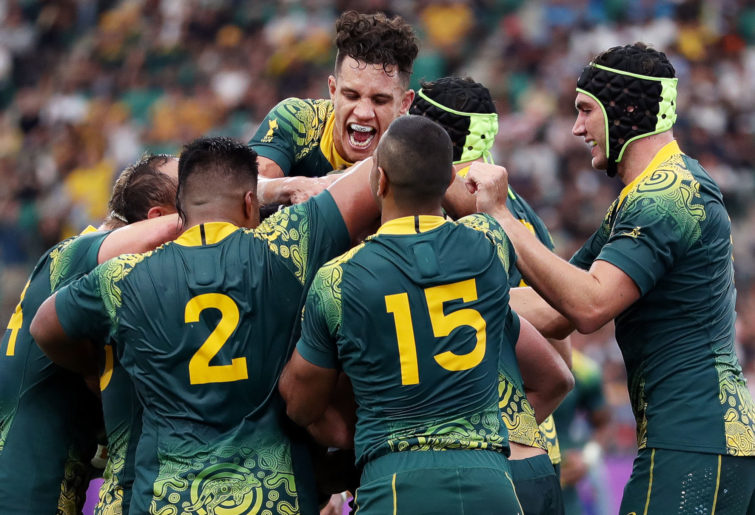 How good would Australia be without rugby league? (Photo by Dan Mullan/Getty Images)

After over 100 years of competing against each other and building separate competitions, league has emerged with the stronger domestic presence in Australia, while union has a stronger international presence.

League lacks any real international competition and its ability to grow in Australia beyond NSW and Queensland seems to be limited if not impossible.

Union is losing ground in Australia with interest in Super Rugby and the Wallabies reducing and unless the Wallabies do well in Japan, there is a danger the sport will slide even further.

Union needs an injection of player talent while league is locked into a geographical spiral unless it can find a way to expand beyond its current two state borders.

Both codes are struggling to make inroads into new markets in Australia. Union has the international presence for Australia to make a statement, but we lack the player depth of talent to do so while league has an abundance of talented players but only a small stage on which to showcase them.

Given the above, surely there is scope for the leaders of both codes in Australia to consider some “out of the box” thinking in order to secure the future of rugby in Australia.

Many organisations reach a point in their life cycle where significant strategic moves are necessary in order to build a future as the market’s dynamics change around them.

Occasionally, this requires game changing restructures and strategies that hitherto were viewed as too hard or too implausible. Standing still however is assured, although sometimes slow, death as competitors and new entrants emerge that eat into your market.

Often, competitors for many decades conclude that a strategic merger that unites the strengths of two organisations will produce a stronger and more resilient single entity that can better cope with the future.

In a world where entertainment and communications are becoming more international in its delivery and audience (e.g. Netflix, Amazon, ESPN, and the global following of sport competitions such as the EPL, NFL and NBA) can, internationally speaking, minor sports such as league and AFL compete in the future for the best athletes when bigger sports from the USA and Europe beckon with pots of money and fame beyond that which can be delivered in Australia alone?

For union, this question is perhaps less of an issue than it is for league, as union is well established internationally with a growing following in all regions of the world.

Witness the World Rugby Cup. 75,000 attended the Japan vs Scotland game and it was estimated that 50 per cent of TVs in Japan were tuned to the game with an audience of approximately 60 million in Japan alone.

How far into the future would it be for league to replicate that in any country (except in England perhaps) and does it have the time and resources to even try?

The hard decision for league in Australia is whether a more secure future can be achieved for its clubs at all levels by reverting to union rules.

Obviously, this could not happen overnight or even in one season, but a strategy designed to convert the game in stages over several years from grassroots up to NRL could turn league players into world-class union players, given the quality of the modern athletes currently playing League and the right training and skills development.

While there are those who have strong opinions regarding the virtues and faults of both games, there is more in common between league and Union than that which differentiates the codes. 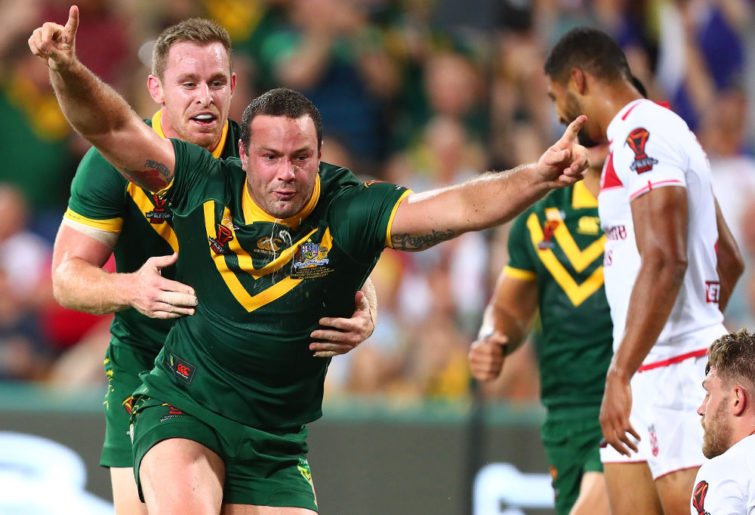 For a start, they are both rugby, fundamentally the same game with the same objective to score tries and kick goals, not passing the ball forward, not playing at the ball from an offside position, scrums, similar forward and backline configurations (except for two additional forward in union) and similar skill sets.

That is not to say, there are also some rules, skills and tactical differences, but with coaching and the quality of the talent available, in time a strong and steady stream of union players will emerge.

After over 100 years of competing it’s time to put aside the biases and code wars and reunite union and league in Australia under one single Rugby banner playing under the game laws of union.

The benefits include:
– Preserving the current NRL clubs along with their history and competition, but instead of playing league, they play union;
– The Wallabies and other national teams’ benefit, in time, from increased access to high performance player talent and player numbers as players historically playing league become available to rugby. This will result in enhanced performance of national teams, with international success resulting.
– Improved financial results flowing from in increased exposure consequent upon improved performance of the Wallabies, player numbers, broadcast rights and sponsorship.
– Improved player pathways for league players who will have increased opportunities for international competition and to play internationally;
– Elimination of competition between the codes for players, sponsors, and fans;
– Increased market leverage for broadcast rights and sponsorship as a result of stronger domestic and international exposure and competitions;
– Potentially, the NRL competition could include current Super Rugby clubs (Rebels, Reds and Brumbies) as well as the Force in Perth, thus enabling fast tracked expansion of the NRL in key markets. Given the number of NRL clubs located in Sydney, the playing strength of the Waratahs could be dispersed among current NRL clubs to seed some union skills into those clubs.
– Less competition for grounds access and increased leverage for stadium and ground enhancements.

There will be many, I’m sure, who will argue that the idea is fanciful or that they would never follow the sport if their club adopted union rules.

But there are also many who understand the need to evolve in order to survive and grow in the future.

Sometimes, it’s better to kill a sacred cow and eat it, rather than slowly starve to death as other eat your lunch.

I don’t view this a sacrificing league for the sake of union, but moreover I take a higher view that I enjoy both forms of the game of rugby, but in order to maximise that experience and to secure a future for the game in Australia, I believe the best strategy is to convert NRL and other league clubs to union-playing clubs.

This would preserve their club history and competitions, while at the same time enhancing player talent for our national teams and strengthening the overall financial and competitive position of rugby in Australia.

The original reason for the separation of league from union has passed, with both games now professional.

The games are still essentially are game of rugby, albeit with some slight rule differences – can we not build on the strengths of both in Australia (i.e. a strong domestic NRL competition and a strong international union presence) to take rugby forward and make the game great again in Australia through a strong National rugby league competition providing a strong national team.

United we stand, divided we fall.