The Wallabies have been bundled out of the World Cup by England, going down 40 points to 16 in a match that will be remembered for how close and yet how far Australia are off the top international pace at the moment.

If you looked just at the stats you would have assumed that the Wallabies won this one. They dominated in possession, territory, metres run and discipline.

But when you see the score you know something else was going on, and that the Wallabies couldn’t convert those chances into actual points.

The first 43 minutes were intense and after it we had a one-point game. Australia had so much of the momentum throughout this period and dominated England in everything but the scoreboard.

Early on Australia seemed to be playing a game plan that was based on their better handling skills and they got early rewards.

However as the game went by it became clear that there were underlying issues with the Wallabies’ game plan that were destined to come back and haunt them eventually.

After an early penalty goal from Christian Lealiifano and good periods of possession, the Wallabies found themselves under the pump thanks to two quick strikes from England.

The first was a well-worked try finished by Jonny May in the corner. England stretched the Wallabies one side and then the other and simple drawing the man and passing the ball gave May the space he needed to sneak in.

The second try was off the back of an intercept where Henry Slade jumped on a loose pass from David Pocock. He sprinted away and then just before being tackled he put in a lovely, measured grubber for May to run onto and score his second in just a few minutes.

One might think that this is where the landslide started but to be fair to the Wallabies they fought their way back and early in the second half they got a crucial try.

As Marika Koroibete crossed the line and the conversion sailed over, one did start to think that maybe this was going to be a good night for Australia.

They had the momentum. They had so much ball and territory and minutes later they were camped on the English line.

If they could just get over, then surely this could be the moment where they break English hearts and spirits.

But instead of scoring the try that felt inevitable they lost the ball, England cleared and then Will Genia knocked on.

England had gone from defending their lead and their line to having a scrum on halfway in a blink of an eye.

From that moment onwards England were unstoppable. They used clinical accuracy with passing and kicking to pin the Aussies back in their half and picked off their opportunities with All Blacks-esque efficiency.

First Kyle Sinckler scored a surprise try where he found himself in space ten metres out from the Wallabies line. Once he recovered from the shock he crashed over the line.

It was a special moment for the usually hot-headed prop – he’d been under real pressure from the Aussie front row earlier in the game and you were waiting for the brain explosion – but he stole crucial ball from the Aussies and then scored as well.

Just as brutal as the try were then the nine points Owen Farrell scored through penalties in the next 22 minutes that just kept taking the game further and further away from the panicking Wallabies.

The final try was another intercept for England but it didn’t matter – the game was gone by then. 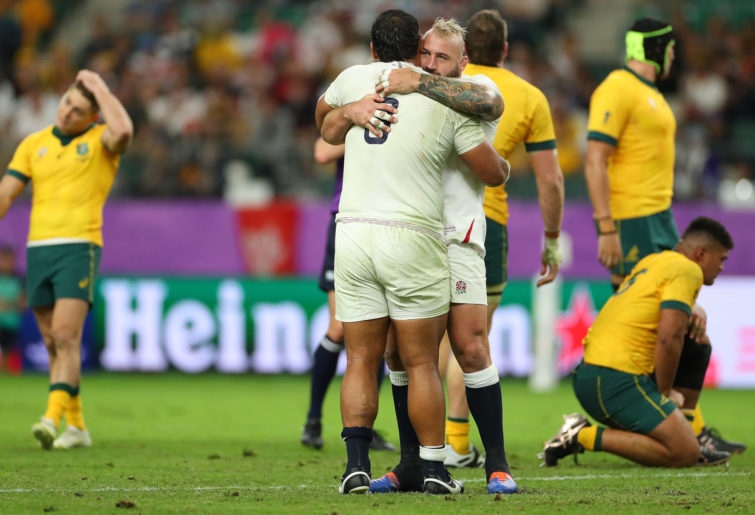 There is so much to analyse in this game but in short the Wallabies were shown on the biggest stage to be a team who lack confidence, a good plan A, a reliable plan B and rugby intelligence.

They’ve got some very good individual players for sure but as a unit they were given a real lesson today by a better side, a smarter side.

Getting knocked out of the World Cup is tough at any stage. Getting embarrassed is another thing and today Australian rugby was embarrassed.

Time for chance and time for optimism. There are some genuine youthful talents in the squad but they have to now learn how to play smart, accurate rugby.

There will be calls for heads to roll and yes change is needed. But the next senior voices must be the right people – not just more of the same.

The game of rugby in Australia is at a crossroads and let’s hope the people in charge choose the right path to a brighter future.