The practice of reading cricket

The cricket writer and Marxist historian C.L.R. James saw, in the history of West Indies cricket, the social and political history of the West Indies.

He wrote in his memoir, Beyond a Boundary, that in order to write a definitive biography of Don Bradman, one would need also to write a detailed history of the social and economic tensions that defined that period of Australian life.

It was this refusal to disavow sport and games as an ideological tool that led to his break from Trotskyism, and his rejection of the principle of the vanguard party. He focused on the lives and social conditions of famous and anonymous cricketers alike to demonstrate that sport does not take place in a separate sphere to politics.

Like all art forms, sport is shaped by the broader social tensions of its environment. Crucially, James’ writings are not another form of biographical illusion; it is an examination of the social and contextual nature of the patterns of James’ life, and the lives of cricketers, to better understand the patterns of history.

Most critics, sociologists are useless, find it difficult to apply James’ reading of cricket as a form of cultural expression on par with literature or drama to a modern context. Neither do they apply his reading of sport as political expression outside of a colonial context.

Most contemporary sports writers do not either; in cricket, the Australian Jarrod Kimber and Pakistani Osman Samiuddin come closest, but are not necessarily consistent. It is unfortunate, because it means our knowledge and appreciation of sport falls short of a full understanding.

Virat Kohli’s confidence, bordering on belligerence, is not just the egotism of a uniquely talented sportsmen; it is infused with, and created by, the growing confidence and entrenched nationalism of the Indian people.

Australian ball-tampering shocked a nation because it exposed the lie of a ‘hard but fair’ mantra that governs not only their cricket but their immigration and economic policies. England’s diverse white-ball team is in an expression of those tensions dominating the Brexit debate. Afghanistan’s emergence as a cricketing force reflects a nation striving to emerge from never-ending war.

Pakistan’s chaotic administration is mirrored in their political history. West Indies’ decline and slow rebuild matches the economic trajectory of the islands since the turn of the millennium.

Through the hopes and expectations invested by the Trinidadian masses into the cricketer Learie Constantine, his continued success on the cricket field gave living expression to the growing nationalist sentiments taking hold in the local politics.

It was Constantine who triggered James’ own nationalist politics; his instincts had been in that direction but his ideas had been vague. During a discussion on West Indies cricket, Constantine said to him, “‘you have it all wrong. You believe all that you read in those books. They are no better than we’… ‘we won that match. We won it’”.

James says it was not his intention to imply the West Indian was inferior to the Englishman, but he realised that he had. He writes that Constantine “revolted against the revolting contrast between his first-class status as a cricketer and his third-class status as man”.

Through his cricket, Constantine was giving life to all the racial and class tensions that dominated the island, the Caribbean and all colonial societies.

Popular culture, including sport and games, is infused with the social tensions of its environment. The cricket being played in Trinidad exposed the contradictions of imperial rule, contributing to the conditions that would lead to its downfall.

It was the presence of black and working class West Indians on the cricket field, where their runs and wickets had the same value as those scored and taken by the white elite, that exposed these contradictions and expressed the racial and social tensions in wider society.

Just as the diversity of England’s World Cup winning side expresses the tensions in English politics and the ball-tampering of Australia’s cricketers exposed the ugly side of Australian society.

This is how you read cricket. As social history given living expression.

Steve O'Shaughnessy had the whole crowd giggling with his very informal approach to this DRS decision in The Hundred. Adam Hose of the Northern… 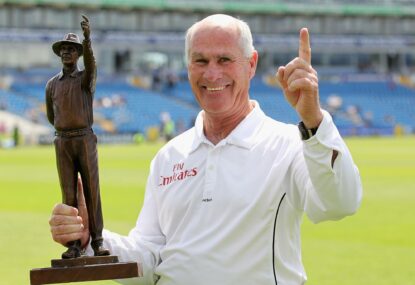 Warne was coach of the Lord's-based men's side during last season's inaugural edition of The Hundred competition. 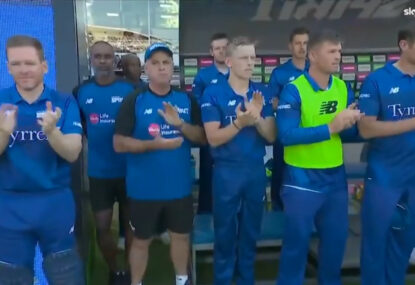