This isn’t your grandma’s Denver Broncos or your father’s for that matter, the 2019 Denver Broncos are an embarrassment. The club has fallen to lows unseen since the 1960s, after being routed 30-6 by Kansas City.

Thursday night’s performance can only be described as flat out humiliating. It was more humiliating than when the Raiders dropped 59 on the Broncos in 2010.

That night, they gifted Kansas City their biggest win in Denver since 1994.

The Broncos looked more like a team of middle schoolers that had stolen the jerseys of the pros rather than a team of professional footballers.

The Denver offence was beyond futile, they made the Chiefs look better than the ’85 Bears and the steel curtain combined. For the Broncos to turn out that kind of performance is soul-crushing.

They finished on Thursday night with a mere 205 yards of offence and a measly six points; the fewest Denver has ever registered in their 71 home prime time games.

There was no heart, no will to win and no fight – that is the hardest pill to swallow for Denver fans. The faithful in the stands put in more effort than some of those players.

Joe Flacco’s never been known for his athleticism, but he looked the furthest thing from a former Super Bowl MVP, resembling something more inanimate like a statue. 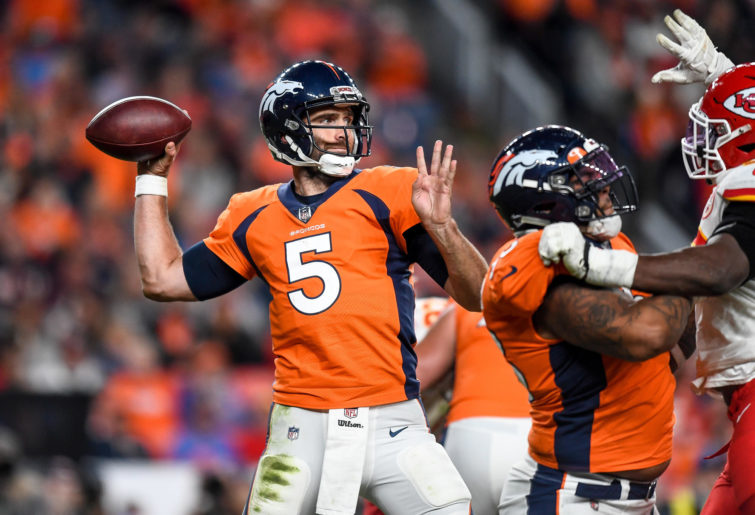 Flacco went 21-of-34 for 213 yards with no touchdowns or interceptions.

On the surface, it wasn’t an awful night for the veteran quarterback, but he refused to step up into the pocket and missed easy yards on man coverage. His accuracy was off, missing men by some distance which would have resulted in easy first downs.

What does come back to Flacco is Denver’s inability to get completions on third down. The Broncos are 6-of-38 on third-down attempts over the last three games.

Even the ability to change the offence on the run, when the straight back two-step drop wasn’t working – why not try some screen plays to nullify the blitz, why not throw in some wild cat or something else?

Or, why not just go back to the ground game? Denver tried to have a balanced offence when the blueprint to beat the Chiefs is clear; you pound that rock until your backs can longer run.

The definition of insanity is doing the same thing over and over again and expecting different results and that is exactly what the Broncos did with the football.

But the problems run deeper than that, some players have forgotten the very skills that got them to the top.

Noah Fant is a highly touted tight end out of college who has lapsed. He is struggling with the simple tasks and unfortunately would struggle to get a catch in a thanksgiving flag football game.

Just when the offensive line looked as if they were getting it together, they’ve fallen back into their old habits, giving up nine sacks.

The offensive line struggled to read a simple blitz but that problem only intensified when a different look was thrown at them. When the Chiefs used stunts, Denver reacted like a deer in the headlights.

The coaching staff can’t escape criticism either; some of the calls they made blows the mind.

Questions can be asked about going for two after the opening drive touchdown, but that can easily be answered; the coaches knew they had to chase points.

But the biggest contention of the night was the fake punt.

It’s such a low percentage play at the best of times, let alone when you’re struggling.

It screamed as if the coaching staff were desperate to make things happen, they knew they needed points but that’s a call made way too early in a 10-6 game. You just simply punt the football away there.

The Chiefs offence do not need things made easier for them, the Broncos just handed them points on a silver platter with play calls like that.

The focus for the players will obviously be on pulling this season out of the dumpster, but if the Broncos front office doesn’t start thinking about 2020 now, it’s a massive missed opportunity.

2019 now becomes the year you figure out what you have and who is going to help you rebuild.

When Drew Lock is healthy he has to play. You have to find out if he can hang on Sundays before this year’s draft, considering a star quarterback is likely to be available when Denver select.

With the Broncos season all but over, the next question will be; is it time for a fire sale?

There is no quick answer to this, it will be very hard for the organisation to move on some of the most decorated players the franchise has ever had.

Emmanuel Sanders being traded makes the most sense, his contract is up at season’s end and he has had a solid year, but nothing spectacular. He had five catches for 60 yards this week. It wouldn’t be stretch to say his explosiveness is wasted on an offence so inept they can barely find him.

It wouldn’t be a massive loss, given Courtland Sutton seems to be Joe Flacco’s favourite target, but it would mean DaeSean Hamilton would have to step up.

A late-round pick similar to what Denver received from Houston for Demaryius Thomas is about market value.

Chris Harris Jnr is in his last year in Broncos country. He doesn’t seem to enjoy life in Denver at the moment, although who would when you were on the team during the Peyton Manning days?

The Broncos are shallow in the secondary so a loss like Harris would be massive, however, this team isn’t going anywhere anytime fast and there are plenty of contenders out there – Seattle would be desperate for a player like him.

Denver won’t cash in when it comes to draft picks (at most they may get a fifth and sixth in return) but after his service to the franchise, it might a gesture of goodwill to let him play for a contender.

Trading Von Miller is still a big hypothetical. John Elway would have to be blown away by an offer to consider it and, going on current currency, it’s would have to be multiple first-round picks.

That is assuming Von is still happy to be a Bronco because, if there is even a hint that Von wants a fresh start, the team loses leverage.

For a team that’s been in the NFL cellar for a number of years, there is still so much uncertainty. One thing is for certain; Sanders, Harris or Miller leaving would break a lot of hearts – those guys will all likely end up in the ring of fame one day.

As tough as it is for the Broncos right now, you have to look at every potential move to make this team better, because the current form is unacceptable for one of the proudest franchises in the NFL.

Thursday night was no doubt ugly but, unfortunately, this is going to get worse before it gets better.