Will
Roar Pro
21st October, 2019
8
Join the conversation
Advertisement
Write for The Roar

There’s no telling, nor are there ever any guarantees, that Maclaren’s form will continue into the prolonged future. Is there an A-League Golden Boot in his sights? Or will his goals when wearing a green-and-gold national kit help launch the Socceroos into the 2022 World Cup in Qatar?

However, he is off to a good start to the 2019-20 A-League season for Melbourne City, of whom great things are expected out of this season by many football pundits – especially given the high-flying fortunes of the City Football Group’s other global entities in Manchester City in the English Premier League and New York City FC in the USA’s Major League Soccer circuit, as the MLS Cup playoffs are about to start for the latter.

And aside from the likes of former Socceroos John Aloisi, Michael Beauchamp and Simon Colosimo – who, in fairness, all linked up with Melbourne’s Sky Blues in the respective twilights of their careers – and Uruguayan striker Bruno Fornaroli, Melbourne City have really lacked a true marquee player to base their on- and off-field fortunes upon, and Maclaren can fit that bill while approaching the prime seasons of his career.

Now into their tenth A-League campaign, Melbourne City has endured throughout much of its existence with the perception of being known as the so-called “second club” in Victoria’s capital city behind perennial powerhouse Melbourne Victory. And with that, attendance for their home games at AAMI Park in the city’s Olympic precinct have gone up and down like a popular child’s toy.

And with just under 7400 fans going through the AAMI Park turnstiles on Sunday afternoon for the match against Adelaide United, suggestions may be ripe regarding a continuation of that trend. 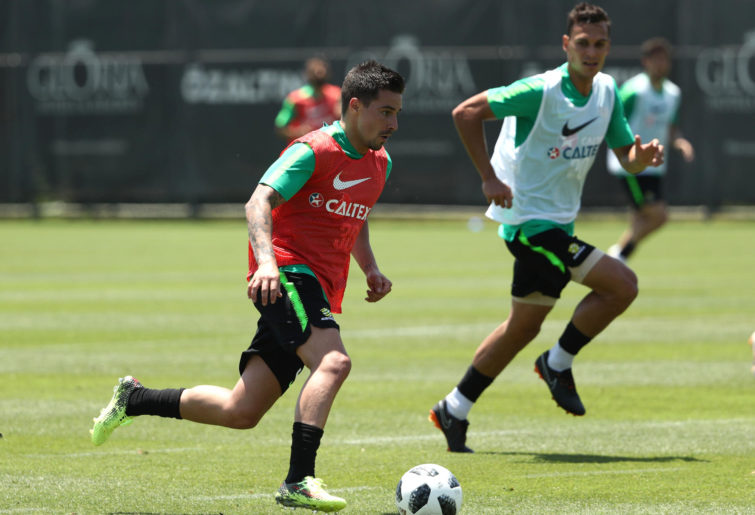 So wouldn’t that lend an even greater impetus to market Jamie Maclaren as the face of Melbourne City FC?

Maclaren’s current emergence into the national spotlight should surprise very few A-League aficionados, for that it has been a long time coming. Now with his third A-League club, Maclaren enjoyed his best success with Brisbane Roar in the 2015-16 and ’16-17 seasons, amassing 40 goals in all competitions in 53 games, thereby earning him a transfer to Bundesliga 2 club SV Darmstadt 98.

Maclaren’s European experience lacked the same success as his wonderful form for Brisbane, not finding the back of the net in only six appearances for the German side, which then loaned him to Scottish Premier League club Hibernian, where he scored nine goals in 30 appearances.

Once released by Darmstadt, Maclaren returned home to sign with Melbourne City, rediscovering his golden touch in the top-flight domestic competition, scoring five times in nine games after his signing last January.

At the age of 26, one would suggest that his best seasons are ahead of him, and the native of Sunbury in Melbourne’s outer north-western suburbs also possesses the comfort zone and peace of mind of being near home for the sake of his goal-scoring exploits.

That is certainly something from a marketing angle, that Melbourne City can stake its pride around. Local player, doing great things, hoping to gain another A-League Golden Boot to go with the one he garnered after the same honour for the 2016-17 season, as well as the back-to-back Young Player of the Year accolades at the same time while with Brisbane Roar.

And bidding to lead Melbourne City to its first A-League title – coming after, the club hopes, silverware earned with FFA Cup final success in Adelaide on Wednesday evening – and hoping to bang in the goals for Australia in the Socceroos’ World Cup qualifying matches.

Maclaren is showing signs that his goal-scoring prowess from his first tour of duty in the A-League has returned with a flourish. And while it won’t surprise current Melbourne City supporters, the club would be wise to use his talents and attributes to gain an edge at the box office.

Andrew Nabbout’s arrival at Melbourne City comes as a huge surprise. Having been announced as a signing for Perth Glory only three weeks ago, the border restrictions on WA meant that the move out west for Nabbout and his family was no longer viable, resulting in the contract being mutually terminated. I’d started thinking about […]