So the dream run has ended. Japan – a team that have captured the attention and hearts of rugby fans all over the world – have bowed out of their World Cup.

Meanwhile, the juggernaut that is South Africa has taken another step towards a final place and a third title.

The Springboks coped well with being cast as the villains in this match where anyone playing the loveable hosts was going to be on the wrong side of the crowd.

As you’d expect from a quarter-final, there was a lot to chat about.

Japan keep you guessing
Japan have been a real surprise in this World Cup. While there was plenty of reminiscing about that day in Brighton four years ago, Japan have still struggled against the top teams in between tournaments.

So it was impressive how they dominated all their opposition in the group stages and in the first half of this quarter-final the South Africans struggled to keep up with them.

But to say it’s just down to the relentless pace that the Japanese play at would be to do them a disservice.

Firstly, this pace is combined with an incredible accuracy and skill set that most teams would be jealous of. The Japanese offloading game in the first half was impressive and the Boks couldn’t stop it.

The South Africans were lucky that they scrambled well enough to stop the numerous half breaks turning into points for the home side.

Secondly, they have built up a confidence to back themselves and to try things that unsettle the opposition. This was demonstrated in the opening 30 seconds when they tried a cross-field kick well inside their own 22.

This wasn’t the action of some reckless team but a considered approach that had its risks for sure, but also showed the South Africans that they couldn’t take anything for granted.

Thirdly, the Japanese scrum has really become a threat. The Boks – a team who pride themselves on their forward dominance – struggled a couple of times at scrum time as the Japanese pack used tight organisation to bully the bigger, stronger opposition.

It took one of the best teams in the world to change their game plan to be able to cope with this Japan side and that is a huge compliment to the way the coaches have set them up and the players have executed. 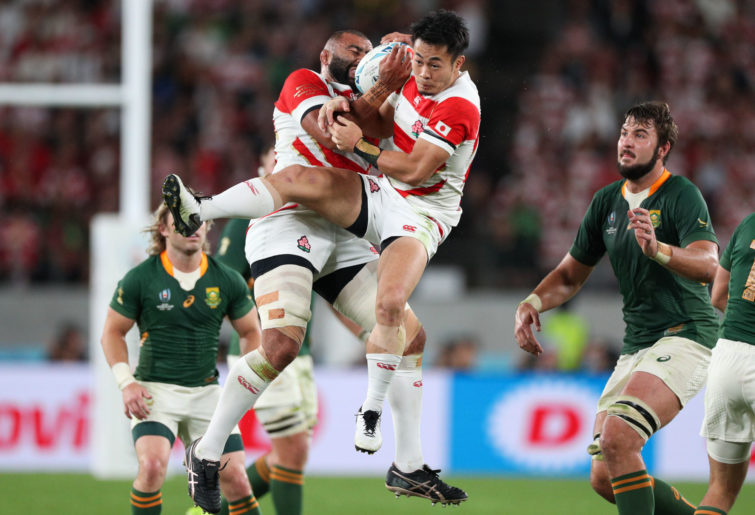 It is possible to have a plan B!
One of the most frustrating things about some of the top sides is when they fail to be able to adapt to the way the game is turning out – yes Wallabies we’re looking at you, and you too Ireland!

A lack of a plan B has seen many good teams lose crucial games and leave their fans wondering what on earth happened.

South Africa showed against Japan that they have a very effective Plan B up their sleeves and that they know how to engage that plan part way through a game.

In the first half, the Japanese didn’t let the Springboks settle at all and they ran them ragged. When the Boks did get their hands on the ball they too tried to play a high tempo game and looked to spread the ball.

It became clear though that this type of approach was going to be tough to maintain and arguably played to the advantage of Japan.

In the second half, the Springboks came out and played a tight, power game and battered Japan into submission.

It took time for sure but they suffocated the opposition while huge South African forwards just kept crashing into the Japanese defence over and over.

It was brutal and it worked. Japan offloaded 11 times in the first half but only twice in the second half.

That was just one of the results of this game plan shift with the other being the scoreboard. 5-3 at half time became 26-3 come the final gong.

This ability to acknowledge that Plan A isn’t working, to agree to change plans halfway through a game and then actually execute that Plan B successfully is impressive and should worry Wales a lot.

The difference genuine wingers make
One of the long-running debates in rugby selection has been what role utility backs have in a starting line up.

Many teams choose to go for talented all-rounders in positions like full back or wing rather than specialists.

Players like Reece Hodge, Cheika would have argued, can provide a range of skills that are useful to the team and that outranks their lack of wing expertise.

However on Sunday we saw the benefits of true out and out wingers. The men on display for both sides were absolutely electrifying and created opportunities for both their sides thanks to their out and out pace.

Cheslin Kolbe and Makazole Mapimpi were a consistent threat and caused real problems with their out and out pace and finishers sense for an opportunity.

Meanwhile, Kenki Fukuoka was inspirational for Japan and in the 14th minute made Kolbe look like a flat-footed prop in the way he went around him.

Some coaches argue that you need big, tall wingers and that they’d prefer that to pure pace but Kolbe poured cold water on that theory more than once.

The 1.71m, 80kg speedster out jumped taller teammates and opponents several times and is fast becoming a star in the 15-man game as well as the 7-a-side style.

Real wingers are the way to go! That yellow card
It was the ninth minute and Tendai Mtawarira’s blood pressure must have been through the roof of the Tokyo stadium.

In the end Wayne Barnes pulled out a yellow card immediately and The Beast almost sprinted off to the sin bin before Barnes could change his mind.

At the time there were many who commended Barnes for his quick, decisive behaviour. Here was a man who didn’t need to wait for some guy in a bunker watching a hundred angles to make his decision for him.

The yellow card came out in seconds and the match continued. That’s how real refs do it!

But the more you watch the replay, the more you start to wonder – was he a bit quick off the mark? Should he have taken just a minute to double check how the prop hit the ground? Was that Inagaki’s shoulder or head that was driven into the turf?

Fans and pundits continue to be divided and obviously things aren’t going to change.

But it’s interesting to wonder what would have happened if that had been a red and also almost amusing how fans continue to bounce back and forth between wanting refs to make quick decisions themselves, but do make sure that they use the tech available to them at the same time!

What happens next really matters
Japan might be out of the tournament but this cannot be the end of their story. The debate over Tier Two nations has had gasoline poured all over it this World Cup with teams like Japan and Fiji demonstrating that it’s just not appropriate to refer to them as being sub-standard.

The rugby world and especially World Rugby, the Six Nations and SANZAAR cannot sit back and let the momentum from this World Cup drift away. Getting teams like Fiji and Japan more involved can only be a good thing.

Yes the logistics are tough and yes there’s more to it than just the players on the field, but this opportunity must be grabbed and our sport must now evolve into something bigger and better.

World Rugby’s definition of Tier Two was already out of wack before the World Cup with Japan and Fiji being ranked above Argentina and Georgia and the USA being ranked higher than Italy. Now it has to be acknowledged that it’s totally broken.

Can the Springboks win the whole thing?
And then there were four. Yes the All Blacks are still the favourites but of the three other teams left the Springboks are the only one to be able to point to times over the past year where they’ve challenged the New Zealanders – beating them in 2018 and then drawing in New Zealand this year.

Yes the All Blacks beat the Boks pretty comfortably in the group stages but this Springboks side has found its rhythm now in this competition and the maturity of the performance against Japan was impressive.

Up front the Kiwis might have a better back row but in the front five the South Africans could claim to be a better outfit.

Yes, Aaron Smith is in great form, but Faf de Klerk is pretty terrifying on his day.

Yes, Richie Mo’unga was the form No.10 of Super Rugby but Andre Pollard is in career-best form too.

If they do meet in the Final then the All Blacks will be favourites but if there’s one side that can cause an upset then it’s the Boks.