The topic of Aussies abroad is frequently covered in the football media, but what about Aussies at home?

Foreign based players might create the most interest because of the hope that they will be picked up by top European clubs, but the A-League is also a source of potential Socceroos.

If the football media covered the best domestic Australians the same way as they do in their Aussies abroad columns then I’m sure they would be very popular and help increase interest in the A-League.

I’ll go through a list of some of the best and most promising Australian players in the domestic league to give you a sense of what a regular ‘Aussies At Home’ column might offer.

Jamie Maclaren
In the striker role, the ‘Big Mac’ is competing for the position with Martin Boyle, Adam Taggart and a surging John Iredale for a place in the Socceroos line-up. He needs to perform well this season in the A-League to maintain his profile.

Chris Ikonomidis
After a standout performance at the Asian Cup, the winger is in a similar situation to Maclaren in needing to maintain his form in the A-League to make his case as a Socceroos member. 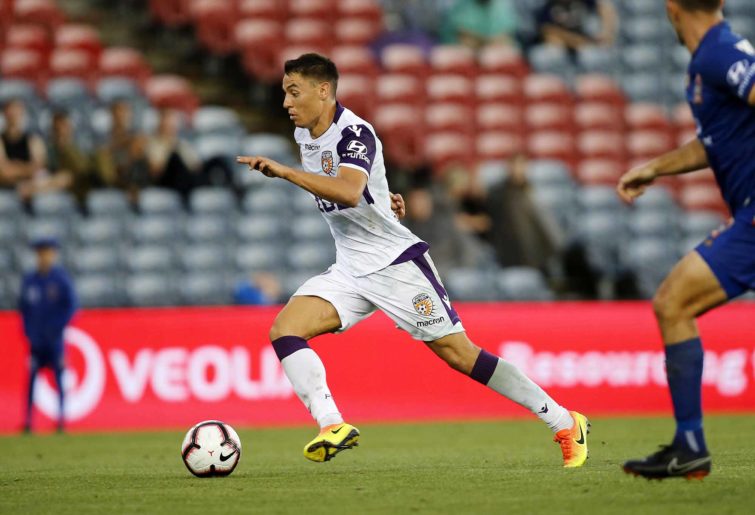 Ramy Najjarine
A player with great potential, Ramy Najjarine has been described as being better than Arzani by none other than Arzani himself. His last season was affected by recovering from injury, so hopefully he can make the most of this one now that he’s better.

Sebastian Pasquali
A technically gifted playmaker, Pasquali was picked up from Ajax by A-League newcomers Western United. With his vision and passing, he should provide good service to Diamante and Kone up front.

Reno Piscopo
The former Inter Milan academy player is now at Wellington Phoenix. His recent standout performance with the Olyroos saw him being described as “Arzani-like” by Graham Arnold.

Denis Genreau
After a stint on loan with PEC Zwolle in Holland he’s now back at Melbourne City. He has his eye on the Tokyo Olympics and Graham Arnold is watching him closely.

Riley McGree
Back at Adelaide United again, Riley McGree has stood out before in the A-League as a midfielder and might get a Socceroos call up at some point. 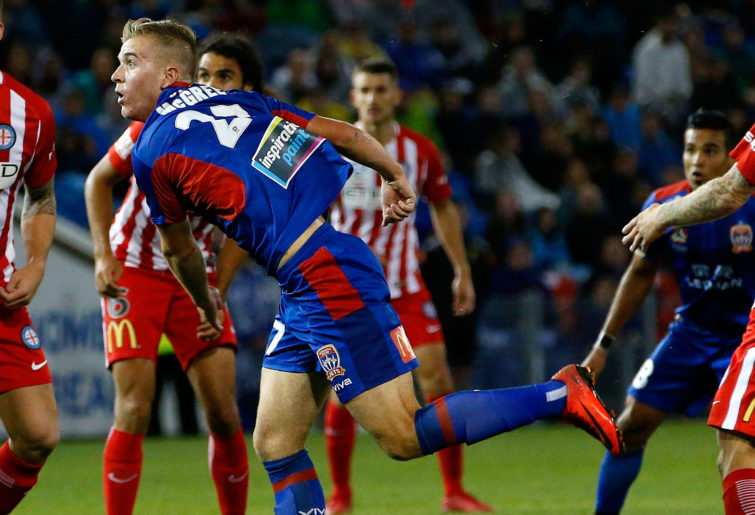 Riley McGree is much more than just a wonder goal. (AAP Image/Darren Pateman)

Connor Metcalfe
As a defensive midfielder, Metcalfe is off to a good start so far this season and could develop into a box to box player. A good show this season could bring him to the attention of the Socceroos coach.

Moudi Najjar
Another Melbourne City player worth watching is Moudi Najjar. He managed to score 24 goals in 36 matches last season with the under 23 squad in the NPL Victoria.

John Roberts
After coming through the youth ranks of both Western Sydney Wanderers and Melbourne City, the 18-year-old is now at Central Coast Mariners where he’s caught the eye of Alen Stajcic. He’s already been a Young Socceroo, but maybe he’ll progress further to the main team.

Kosta Grozos
After coming through their academy, Grozos is now part of the first team at Western Sydney Wanderers where he’s been highlighted for his growth potential in the future.

Al Hassan Toure
A new signing for Adelaide United, the 19-year-old scored a few goals in the FFA Cup in Adelaide’s run to the final. If he can find his place at Adelaide this season, the Socceroos may well be next.

Dylan Wenzel-Halls
A prolific striker netting 29 goals from 40 matches at Ipswich-based Western Pride, he struggled a bit with Brisbane Roar during a poor season last year only managing five from 20. Hopefully he’ll bag a few more this season and put himself on notice for a national call up.

Sam Silvera
After coming through the youth system of Western Sydney Wanderers, Silvera has made the move to Central Coast Mariners. He gave us a glimpse of what he might be capable of during the FFA Cup demonstrating good distribution and ability to attack defenders.

As you can see from the list above, there’s a whole bunch of talented Australian players in the A-League whose progress is worth following.

While the foreign visa players might get most of the media’s attention due to their “marquee” status they often come here as journeymen, whereas many A-League fans would prefer to see more emphasis on the local talent.

In fact, you could put a decent national team together just from players in the A-League.

Maclaren as striker would be obvious, then you could have Ikonomidis, Najjarine and Piscopo across the front three, followed by Pasquali and McGree in the double pivot. Across the back you could have Michael Zullo, Thomas Deng, Nathaniel Atkinson and Rhyan Grant. Then as keeper, Andrew Redmayne completes the set.

If the football media had regular Aussies At Home columns after each A-League round they would get plenty of interest from fans and help increase interest in the league.

It’s good to follow Aussies abroad, but let’s not forget our Aussies right here in our own backyard.

A FFA proposal of cuts of up to 80 per cent to A-League player salaries has prompted the players’ union to demand a fairer sharing of the COVID-19 burden.

The English Premier League is “as confident as we can be” about England’s top-flight football league restarting in June, according to its chief executive Richard Masters.